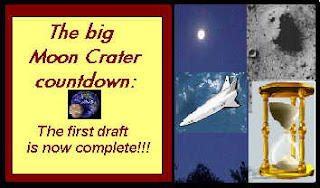 3 things that I've achieved this week with my writing:
* I’ve finished writing the novel that first came to me 8 years ago!
* I’ve also in the process fulfilled an ambition that’s now 5 years old!
* I’ve revisted an ongoing co-operative story from 2 years ago!

A sentence from the new "Moon Crater" chapter:
"Here you will rest forever and and a monument to you will be erected, so those you have inspired from this new generation may journey here to find their own peace..."

It’s done! It’s dusted! But I’m back at the start again, really… Reaching the end of the first draft of my manuscript for Moon Crater feels fantastic but in the back of my mind is still the ever-present thoughts and plans for the all-important second draft which will help me perfect the storytelling… It’s made me think back to when I first had the idea for “Lost & Found” as the short story for Moon Crater was initially named. I conceived it back in 1999 whilst reading a newspaper article about… Well, that would be telling, wouldn’t it? Anyway, to cut a longish story of development short, I actually began writing it seriously as an extended story with the intention of eventually making it into a full-length novel in late 2002… And it’s immensely gratifying now, five years later, to have a finished version of the story sitting on my writing shelf…

But it’s not been an easy road… This past week with the final Epilogue ending, which has actually turned out longer than I envisioned it in its planning, a renewed bout of writer's block hit me. Typical at the final hurdle! In fact, it’s actually been a slow burn, setting in over the course of these final few weeks, and as a result, these last most crucial few chapters aren't my best writing, but there's time to polish them of course – as I’ve mentioned a lot on the blog, there’s still the cushion of the second draft to help with all that and it's never the end of a book you send out first anyway! Still, I don’t want to see myself in a year's time doing endless drafts of the manuscript – I’ll just get it right the first time (or second!)

I know I normally give a little taste of what’s in the week’s finished chapter, by the way, but to tell you what’s actually in the Epilogue to Moon Crater would spoil the whole book! Suffice to say that it rounds off something that’s been running through the whole of the novel since the Prologue at the beginning and I think (and hope) it finishes things off nicely…

Perhaps I could say a little more here about my writing routine now it’s come to a close on the first draft. With my day job, as I’ve mentioned in a previous post, I’m lucky enough to have one late shift a week and this has proved very useful now that the early-morning (6am) writing has stopped with the advent of the dark autumn mornings. It’s a particular aid because after writing for a few hours before my late shift begins, I have a 15-minute walk to the train to get to work, and in that time the things I’ve written and the chapter I’m working on mull over and stew away in my mind, and by the time I get to the station, I’ve found new and often improved ways to look at the material I’ve just produced… A bit of “distance” from a particular piece of writing, be it a novel, short story or poem is never a bad thing so that you can come back to it with a fresh eye and perspective at some later date (much like I’ll do with all the chapters I’ve produced these past 5 months when the mammoth task of Draft # 2 begins in the new year!)

One last thing that I’ll end with is that also on my way to work in the dark mornings LAST autumn, I remember always seeing a light on in a tall house… It was a room with a wall lined with books and someone was always sitting at a computer screen – I remember feeling envious that I couldn’t spend the time like that writing (who knows if that person was a writer too!) but, as I said above, it's so gratifying, a whole year later, that I now sit with my completed story filling out that large “mock-up” black binder I mentioned last week. “Patience is a virtue” my mam always used to say as I grew up, and after a whole 5 years of writing Moon Crater, I’m beginning to take notice of her wise words…

In my other writing news this week:
- I’ve talked about my love of Indiana Jones numerous times across my blog and this week have been re-reading and preparing to post again on a collaborative “Indy” story which I’ve been writing with a fellow fan from Australia for a couple of years now. It’s already received a 5-star rating on the discussion boards where it’s hosted – so if you’d like to take a look and catch up with the story, you can take a gander at the saga so far now at "Indiana Jones & The Curse of the Chinese Whisperer" on The Raven Forums - so, what are you waiting for? Come join myself, BrodyIsDead and VioletIndy there and add your own part of the story!
- I’ve been dotting the “I”s and cross the “T” on my final draft of the Western “Coming Soon” story I promised back in Jan this year – keep an eye out over at my Adventures stories page for it in the coming weeks…
- I've also begun this week to plan a brand new “fan fiction” short story that will likely end up on my "Indie fiction" page some time in the new year. It’s inspired by Back To The Future (my all-time favourite movie series - very influential in my writing and plotting!) - the hero of this particular story is to be one young "Master E.L. von Braun..."

Books I'm reading this week:
The Ruins of Dantooine - I started this book back in June and am still dipping into it every so often between reading other books - still great escapist fun...
Red Mars - I've had Kim Stanley Robinson's Mars triliogy for a while but feel like now's the time to begin reading these seminal books - I can't wait...
Harry Potter & The Order of the Phoenix - seen the film and read the first four books earlier this year, so now onto Book 5...

Next week: It's my final round-up of the "Big Write-Up" where I'll be looking back and evaluating what I've achieved these last five months in creating colourful collages in the world of our two couragous critters... (as well as this the final key words will be revealed so you can finally solved the riddle of the wordsearch on my official site!)