Showing posts from May, 2015
Show All

"Carriage Return" - the beginning of something brand new... 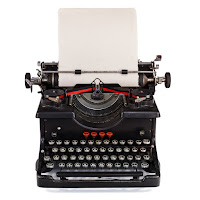 # "Adjectives on the typewriter, he moves his words like a prize fighter... The frenzied pace of the mind inside the cell" # - Cake If you read my last post back in April, you'll get the sense that I rather like a good story title... The  title of this blog post "Carriage Return" for instance, is one that's been rattling round in my head for a while during 2015... It's another of my 'titles without content' at the moment but I love the multiple meanings an individual reader can take from a title and the power they have to draw an audience into a narrative... I've used this particular title on this particular post because I wanted to revisit a theme of my writing which I've oft-derided since beginning my online creative scribbles quest back in 2006, and that's one of "self-publishing".  In the almost-decade since I first launched my own writing presence online (in effect "self-publishing" my own short fictio
Post a comment
CLICK HERE TO READ THE REMAINDER OF THIS POST!
More posts