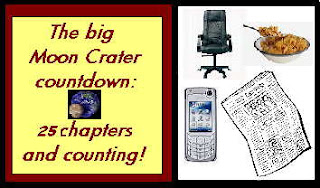 3 things that I've achieved this week with my writing:
* I've brought the main story to a close for the main characters!
* I've prepared and almost finished the introduction to a new story!
* I've devised a story arc for a feathered friend I met a while ago!

A sentence from the new "Moon Crater" chapter:
Jo lowered her mobile, looking at the newspaper article, and said, "So, are you going to go for it? You'd be a sure thing, you know!"


Since beginning the "big write-up" back in May I've been printing out my first draft chapters and keeping them in a large black hard-back folder with plastic sleeves. Well, it's got to Week 15 now, and with only 2 weeks to go, the bloomin' thing's full to the brim! (it'll teach me to count the number of sleeves in one of those things before I begin filling it when it comes to Novel # 2!) Anyway, my point in mentioning this isn't to pat myself on the back and say "Well done, Chris, you're nearly there", but rather that, keeping this "larger than life" version of the novel, and actually having it on my shelf above my desk to glance at and refer to if needed, has really helped push me on and kept me motivated to keep going with the write-up (because believe me even though this tome is what I've craved to write for SO long, at times over the past five months, it's been difficult to get myself sat down at my desk - don't ask me why!). All in all, then, "mocking up" a first-draft book is recommended, I think, so you can see the book grow and come together more clearly as you continue to write...

I thought this week's chapter was going to be easier than it's actually turned out to write... It certainly "looked" simple enough from my plan - a short final chapter which tied all the little straggly loose ends of the story together in basically one scene that's set a little while after the time frame that the rest of the story was in, and it's also a "mirrior" scene of one from the very first chapter, so that the reader gets some nice repetitive views and is able to recall where Billy and Jo began and how far they've come by the book's close... Well, I'm learning never to count my chickens before they've hatched as far as my "planned to the Nth degree writing" goes - all sorts of things have cropped up in the writing of this short, simple chapter to make me realise there's still lots to do and cover when I wade into Draft 2 of the whole manuscript in the new year... I'm pretty happy with how the first draft of Chapter 25 has turned out, though, don't get me wrong. It's just made me realise that this book is far from finished even though this is the final chapter!

My other writing news this week:
- I’ve been busy putting the finishing touches to the introduction "blurb" to Moon Crater Adventures – this should be up sometime in the next month or so as I perfect it a little more (by the end of October at the latest!) to precede the launch of the first story "Simulacrum" not too long after... The introduction as I've said before will set the scene and tone for this space series where YOU are in control of the action and can "seal your own fate" in the process... The other piece of exciting news attached to this is that I'm hopeful that I'll be collaborating with a new illustrator on this project (whose name is being kept top secret until it's confirmed!) - hopefully getting specifically drawn pictures to go with my words on these tales will be an exciting creative journey for both of us...
- Over at my Literary Tales page I've finally launched another one of my promised Coming Soon Stories - it's the tale of little Wren... And that's about all I want to say about it, except enjoy reading it and looking at the new fabulous paintings that accompany that story page once more from artist Vanessa Stafford, the first artist I collaborated with back in late 2006.
- I've been thinking a lot about the remaining Coming Soon Stories this week, and while I proof and correct the Western yarn arriving any day across at my Adventure Stories page, I've realised that I'd like to make the newest addition to my final promised tale of 2007 my feathered friend Kyle's story the second part of an overall trilogy... So expect the themes and characters from that first story to be making a re-appearance (albeit a very frosty one!) by Christmas on that page...

Books/writing looking at this week:
The 7 Professors of the Far North - John Fardell - I saw this book a while ago in a shop and regretted not buying it. It's a cool adventure for kids and contains some amazing ideas... (google books is worth checking out in general too!)
The works of Geoffrey Trease - I've tracked this author down after memories of reading his Bannermere books at school... Didn't realise he wrote a few Elizabethan adventures too...
Slipstream movie - I think this looks amazing - I love stories within stories and even blogged about it almost a year ago, in December 2006...

Next week:
The finishing touches are put to the book with an "Epilogue" (no this isn't a Quinn Martin Production for those of you who remember The Invaders!) - the book began with a Prologue, though, and to complete the journey our jolly jokesters have taken, it will be a fitting close to "Moon Crater" as a whole...