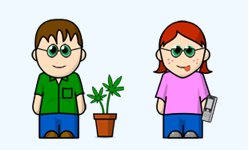 Well, it's a bit later than promised, but I've now got the results from the 1st Moon Crater Fiction Decisions Poll and I'm happy to be able to report them to you right here, right now. Loads of you responded to the call to help me decide what Billy and Jo, the main characters of the story, will look like and so without further ado, here's what the most popular results were...

Jo will have:
6 a) - red hair, tied in a ponytail (but sometimes down!)
7 a) - hazel eyes
8 b) - a height that's no taller than Billy (perhaps the same!)
9 b) - colourful jumpers to wear outside of school
10 b) - a ringtone that's her favourite pop song
As I continue to write Moon Crater and go back redrafting the chapters I've already written, I'll work and weave these characteristics into Billy and Jo's characters. If the novel does indeed get published in the next few years, you'll be able to check if I've kept to my word of abiding by the results of this Fiction Decisions Poll - and remember, YOU decided this, so be proud of yourselves! :>
So! To help get a clearer picture of what these two best friends would look like with the above results inserted into their DNA make-up, I've created Weemee likenesses of them that appears in the picture above for you to see...
What do you think, then? In case you're thinking, "Hang on a minute! You didn't mention anything about glasses in the poll!", you're right, I didn't, but it was because whatever else was decided or not taken up in the results, it is integral to the plot of Moon Crater that Billy and Jo DO BOTH wear glasses - so I'm using my own artistic licence here as the author (I'm sure you'll forgive me!) - I can't tell you any more without spoiling the storyline, but I'll leave you to ponder on why it might be so important for them to wear glasses... Oh, and the pot plant next to Billy is also a major plot point too (try saying "Plant pot plot point" fast five times!), but all I can tell you about the plant is that it's nicknamed "Dumbo"... ;p
Overall I think this 1st poll on my blog has been a huge success - I did have a few comments made about how these characters were mine and nobody else should be able to influence my own decisions about them, but I don't view my writing process like that - the whole point of the exercise was to involve readers as much as possible, and I've been more than pleased with the results! Plus, I can't be too far off the mark, as you'll see if you check out this link to a Star Wars novel that's coming out soon (remember, though, my poll idea came a good week before this one from Mr Lucas!) :

http://starwars.wikia.com/wiki/Darth_Who_Contest
Anyway, I want to thank everyone who contributed to the poll so enthusiastically: Ali, Laura, Twig, Chris T, Chris W, Emma, Andy T, Stephen R, Stephen F, Becks, John and all of the Year 3 class at Throckley Primary School who responded so well and who, so I've heard, have been writing their own versions of what they think Moon Crater is going to be about (the most popular theory being that a piece of Moon rock falls to the Earth in a small village and Billy and Jo find it, but the Moon rock has strange powers and begins to have the oddest effects on the people of this quiet village!) - well done, Year 3, that's a fantastic idea - and I'm sorry Billy's backpack didn't turn out to be red in the end, by the way - thankfully, you didn't guess my version of events for Moon Crater but keep writing and imagining, because that's where the excitement of storytelling lies! :>
I'm happy to round off this post with the promise that this won't be the only poll I run here that will be connected to my writing of Moon Crater - so if you missed out joining in this time, keep this page bookmarked and around the turn of the new year, I'll be asking for your help once more - this time to help decide what the shops, buildings and sights of Billy's and Jo's village will be...
about writing New Stories writing and the Web