Showing posts from October, 2010
Show All

Bringing it Back In Time! 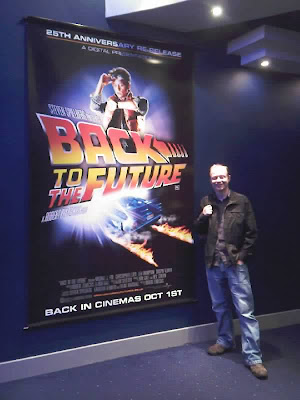 # “Tell me doctor, where are we going this time? Is it the 50s or 1999?!” # – Huey Lewis & The News On this precise day, October 26, at 1:21am, in the year 1985, a crazy wide-eyed scientist intended to travel 25 years into the future in a time machine that he himself built. Unfortunately some dastardly Libyans put pay to his plans but as I sit typing this post, I can’t help reflecting upon (in my humble opinion!) one of the greatest adventure stories that’s now being re-released for it’s 25th anniversary at the cinema and on Blu-ray… Back To The Future is one of my favourite films of all time (pun very much intened!) and it's great to finally see the original film of this epic trilogy back on the big screen this month - especially since I saw the sequels there but only ever got to see the first film of the series on telly VHS back as a kid in the late 80s here in the UK. My first memory of it was on TV when I spotted a quirky-sounding adventure film in the Christmas list
Post a comment
CLICK HERE TO READ THE REMAINDER OF THIS POST!
More posts