Bringing it Back In Time! On this precise day, October 26, at 1:21am, in the year 1985, a crazy wide-eyed scientist intended to travel 25 years into the future in a time machine that he himself built. Unfortunately some dastardly Libyans put pay to his plans but as I sit typing this post, I can’t help reflecting upon (in my humble opinion!) one of the greatest adventure stories that’s now being re-released for it’s 25th anniversary at the cinema and on Blu-ray…

Back To The Future is one of my favourite films of all time (pun very much intened!) and it's great to finally see the original film of this epic trilogy back on the big screen this month - especially since I saw the sequels there but only ever got to see the first film of the series on telly VHS back as a kid in the late 80s here in the UK. My first memory of it was on TV when I spotted a quirky-sounding adventure film in the Christmas listings magazine and decided to record and add it to my growing collection of home video film collection, (it became a yearly ritual to buy my festive pack of blank VHS tapes for Christmas TV recordings to continue to educate myself with the great and the good of films past and present, as a kid and teenager)...

Now, most movies I recorded, I'd go back and watch maybe a year or so later, but with my Back To The Future recording, I well and truly wore the tape out rewatching it over and over (and making everyone I knew watch it too) - even at the young age of 8 or 9, I just knew it was such a milestone film.

Over the proceeding years, I waited with baited breath for the "promised" sequels to the original Back To The Future (but soon read that the end "To Be Continued" card wasn't so much 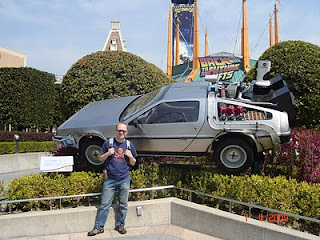 of a promise as a joke by the film's producers) - so I was thrilled and amazed in my mid-teens when Part II and Part III were reported to be filming back-to-back (the first double film production I'd ever heard of, and this just added to my anticipation of where the adventures of Marty and Doc would take them next). And so continued my obsession with all things "BTTF" – from the model Delorean cars, to the rare "Making of..." book of the trilogy that I managed to bag a copy and even tracking down the brilliantly corny but still brilliant "Secrets of the Back To The Future Trilogy" documentary, hosted by Kurt Cameron, having caught the end of it on TV one Saturday morning out of the blue - ironically echoing how I had connected with the original film in the beginning!
But with the close of Part III in the trilogy and a "The End" title card, I had to put away my enthusiasm for these films (possibly a good thing as by that point I'd seen them at least 88 times!) As I grew older and into adulthood and the films finally came out on DVD, I bought the boxset with a passing nostalgia of my youth but recently a reunion promo trailer (see clip above!) from an American TV station proved that my enthusiasm for BTTF will never go away. They're still the kind of films that were meant to be watched all in a row, in one sitting and rewatching them after so much time on the big and the small screen, today in 2010 (only 5 years away from 2015, tranqs, lobos and zipheads!!!) I know they're still one of the most influential films on me growing up, and growing into a writer...

25 years on, I’m older (and hopefully wiser) and the lives of the actors portraying my favourite film heroes have changed a lot too… but this original milestone trilogy lives on and in another 25 years I hope to perhaps be sitting down with my kids (or grandkids?!) and shouting “Butthead” 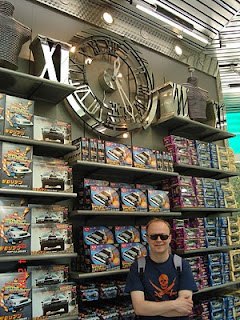 or “He’s on a hoverboard!” at the TV screen (or should I say TV wall?) - but I will say this - the hair on the back of my neck never fails to stands on end when I hear the first 3 familiar chiming notes of the opening credits as the date flashes up and then Alan Silverstri's score kicks in...

I guess if I were to ultimately sum up what attracted me to the Back To The Future trilogy more than any others it's that the writers were able to put across a compelling tale, using a core cast of characters and adding in suitable twists to weave an enjoyable tapestry of an adventure that as a kid and an adult I'm always swept along with. This inspired me as a boy, a teenager and now as an adult to think up my own adventures that would be worthy of the legacy left me by BTTF and even today I find that my writing on the page is quite visual, reflecting the inspiration that film and TV have had on shaping me as an budding author… Who knows, even though there isn’t ever going to be a Back To The Future Part IV, maybe one day I’ll write my own BTTF fan fiction about the early adventures of the Von Brauns when they landed in America... (and, you’ll only know what I’m referring to, if you’re a true BTTF geek, and are proud of it, like me!)