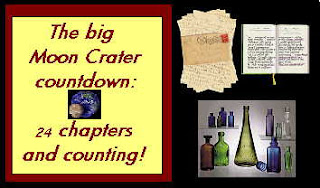 3 things that I've achieved this week with my writing:
* I’ve written the penultimate twist in the novel's story!
* I’ve discovered different times of the day are great for writing!
* I’ve extended my current writing poll for more reader input!

A sentence from the new "Moon Crater" chapter:
“It’s you I’ve come to see actually, Gordon… I’ve got a message for you from Robert...”


After the shared scenes and setting of Chapters 22 and 23, this week's chapter is a stand-alone character piece that centres around the resolution of a mysterious character's name which is key to the entire plot of the book itself… Writing Chapter 24 has got me thinking about names in general though... I often love using (what I think are) clever/hidden-meaning names for characters.. It's a strange thing naming made-up people and frequently I find I drop and change a name when I realise it's not working for the type of person a character has evolved into - naming a character from the outset though is all important to me as it's the first thing that helps me see what they will look and act like...

The name I write under, "CGAllan", is highly important to me as well. It wasn't the first “writing name” I toyed with - there's been a few pen names and nicknames but CGAllan IS my real name and if I ever make it to being published, after much thought on the subject, I think I'd like to be known by my true name rather than a pseudonym. Some people are embarrassed by their middle names or go to great lengths to conceal them from the public eye, but I'm pretty proud of mine - it's George, by the way...

I've always written and signed my name in its full form, deliberately including the "G" each and every time (much to some leg-pulling in my school days, I might add!). It's important to me because it came from a close friend of my parents from the time when they were about the age I am now. George Duncan was by all accounts a fantastically creative person who loved to play the guitar, revelled in the natural world around him and enjoyed nothing more than making people smile. Sadly he died of an aneurism when he was in his late 20s and I never got to meet him.

Using my writing name's central "G" has become symbolic to me of my shared creative spirit with George, of which I'm only touching the surface, with these early forays into my writing life, but which I intend never to let slip or disappear with the daily grind of the "day job". As a writer I've been molded so much by the fantastic experience of my parents' up-bringing too and so it seems fitting that they gave me the middle name which brings me so much inspiration in my grown-up life, living independently from them now. That said, carrying George's name also often makes me wonder what he'd have gone on to achieve and create in his later life if he hadn't been taken from this world so early...

Back as ever, from the tangents I let myself go off on, to the Chapter in hand, though. Reaching 24 means I’ve got to the latter stages of the story and there suddenly seems to be lots to include and cram in before the book’s close. I’ve noticed that recent chapters are getting slightly longer – something I don’t necessarily see as a problem for now – it’ll all come out in the wash in the 2nd draft! But perhaps now at the climax of Moon Crater people would want to know all they can about the reasons behind the mysteries laid out since Chapter 1 so I’m making sure I don’t miss anything out… (But I must still be careful not to do a huge long exhaustive Bond-baddie style monologue at the end or give it three or four exhaustive endings like the recent movie version of Tolkein’s Return Of The King!)

Another change in my writing in these latter stages has been that my 6am get-ups to write for an hour before work have dropped off. I think they’re not working for me now because the darker Autumn mornings have crept in, but I haven’t fretted too much over this because I'm finding other times to fit in an hour or so of writing (in the evenings for instance, if I stop myself from getting glued to the TV!) This change of routine seems just as productive and I think perhaps it is just the act of changing my writing routine (and regularly changing it) that’s recommended – it’s certainly keeping my creative output fresh for now…

That said, this week I’ve also come across some pearls of wisdom about a writing routine from another children’s writer. To close my summary this time, then, here’s what Philp Pullman has to say on this very subject: "I discovered a method that's worked… to write three pages every day, no more, no less. If you can't think of what to write, tough luck; write anyway. If you can think of lots more when you've finished the three pages, don't write it; it'll be that much easier to get going next day."

Only one piece of MAJOR writing news from me this week:
My 2nd Fiction Decisions Poll is now extended for another few months or so (I know, I know, it’s for the second time – clever tie-in though, no?) – it’s now open until the very last minute of the year – when that ball drops at midnight of December 31st 2007, that’s it, folks, the poll will close once and for all. My reasoning for yet another extension to this is because I’ve recently decided I'd like to have three Fiction Polls in total for “Moon Crater”. The first was “2006's Poll”, this 2nd one is now ”2007's Poll” and I'm planning a very special one for “2008's Poll”... Anyway, make sure you tell your friends, your neighbours, their pets and their pets’ fleas about the now-extended 2nd poll! There's been a good response so far but a little under par compared with the rush of enthusiasm seen first time round in 2006. So I think on the whole it needs more advertising really... You've only got a few short months left to get involved now so don’t miss out! If you forget the link for the 2nd Poll, you can easily find it or direct people towards it through the Red Pen object on my official site… And as for 2008's 3rd and FINAL Poll, it will debut on this blog in the spring of next year...

Writing I'm looking at this week:
The Invention of Hugo Cabret - a book I'd love to read, sound right up "Moon Crater"'s street...
Wallace & Gromit in "Trouble At Mill" - There's a cracking NEW film being made, Gromit! Coming Christmas 2008...
Philip Pullman's website - full of useful insights!

Next week:
It’s the end of the end of our daring duo’s journey, but as with all good endings, there’s other stories that are just waiting to begin – only thing is, will they both be following different paths or the same one together?