Thinking Big on a Small Scale... 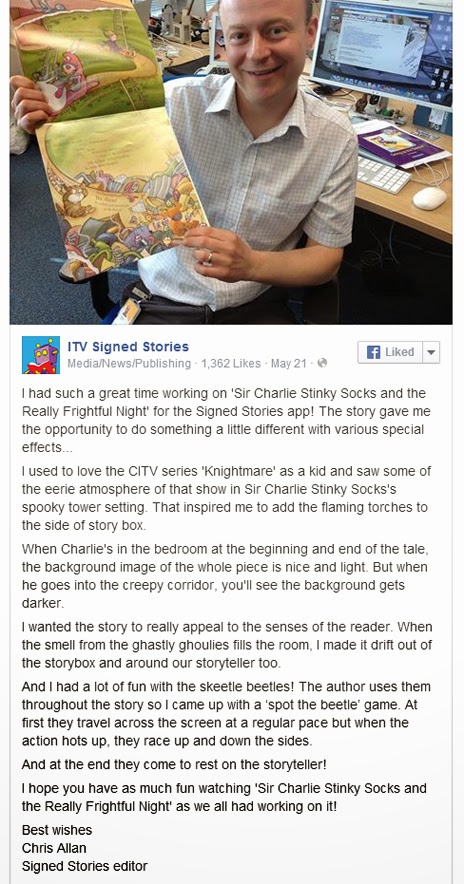 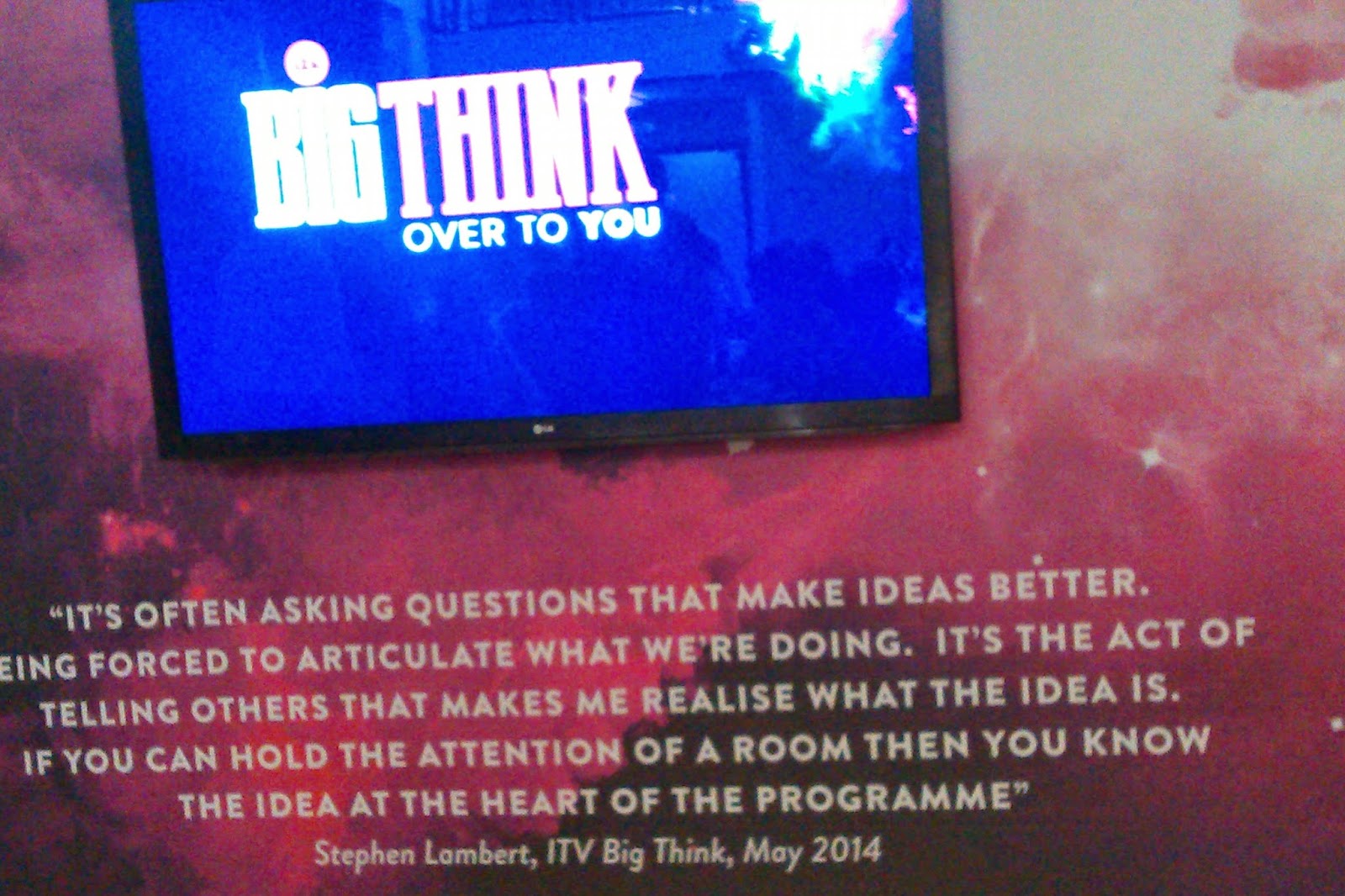 I don’t usually begin my posts with “embedded content” but since I was the one writing the above commentary, talking about my work as a video editor and animator for ITV Signed Stories, I thought it was a good way to introduce this post about another creative aspect of my day job... (you can get a sneak peak at my edited story Sir Charlie Stinky Socks & the Frightful Night at the end of this post!)

I’ve worked for ITV for almost 4 years now and every so often an opportunity for some creative writing within the day job comes up - one such recent chance was the "Big Think", run internally by ITV across the whole company, searching for new programme ideas for the future...

It was all launched at an event in early May at the BFI Southbank in London.  I’d personally wanted to see inside the British Film Institute headquarters for years so after getting through the initial application process and selected to go to this first Big Think event was really exciting.  While it didn’t have the glitz and glam of the Oscars, it had its fair share of celebs and entertaining moments.  The event was hosted by Philip Schofield (a childhood hero of mine from a morning kids show called “Going Live” here in the UK), and a packed auditorium of about 400 colleagues were introduced to a range of speakers who were all “creatives” by nature and in their day jobs too... 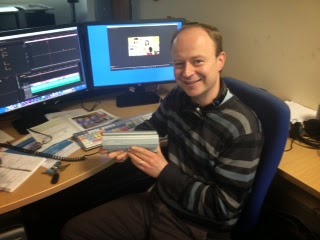 Among the gathered guests was the creator of Moshi Monsters, Michael Acton Smith who told us how he developed his brand and how his ‘franchise’ was born.  There was also Sam Hoyle, one of the team of scriptwriters who created the hit ITV show of 2013 Broadchurch who discussed the twists and turns of a modern ‘Whodunnit’ series which needs to keep viewers guessing.  We heard from the CEO of media phenomenon Buzzfeed, Jonah Peretti, who expounded about the human need for “lists” (and in a way summed up the blogging generation quite nicely).  And we also heard from the creator of Breaking Bad, Vince Gilligan (once a scriptwriter on the amazing X-Files!) who gave us insights into how his ‘little-known show’ broke out and became the behemoth it’s become today (with a spin-off in the works now too). 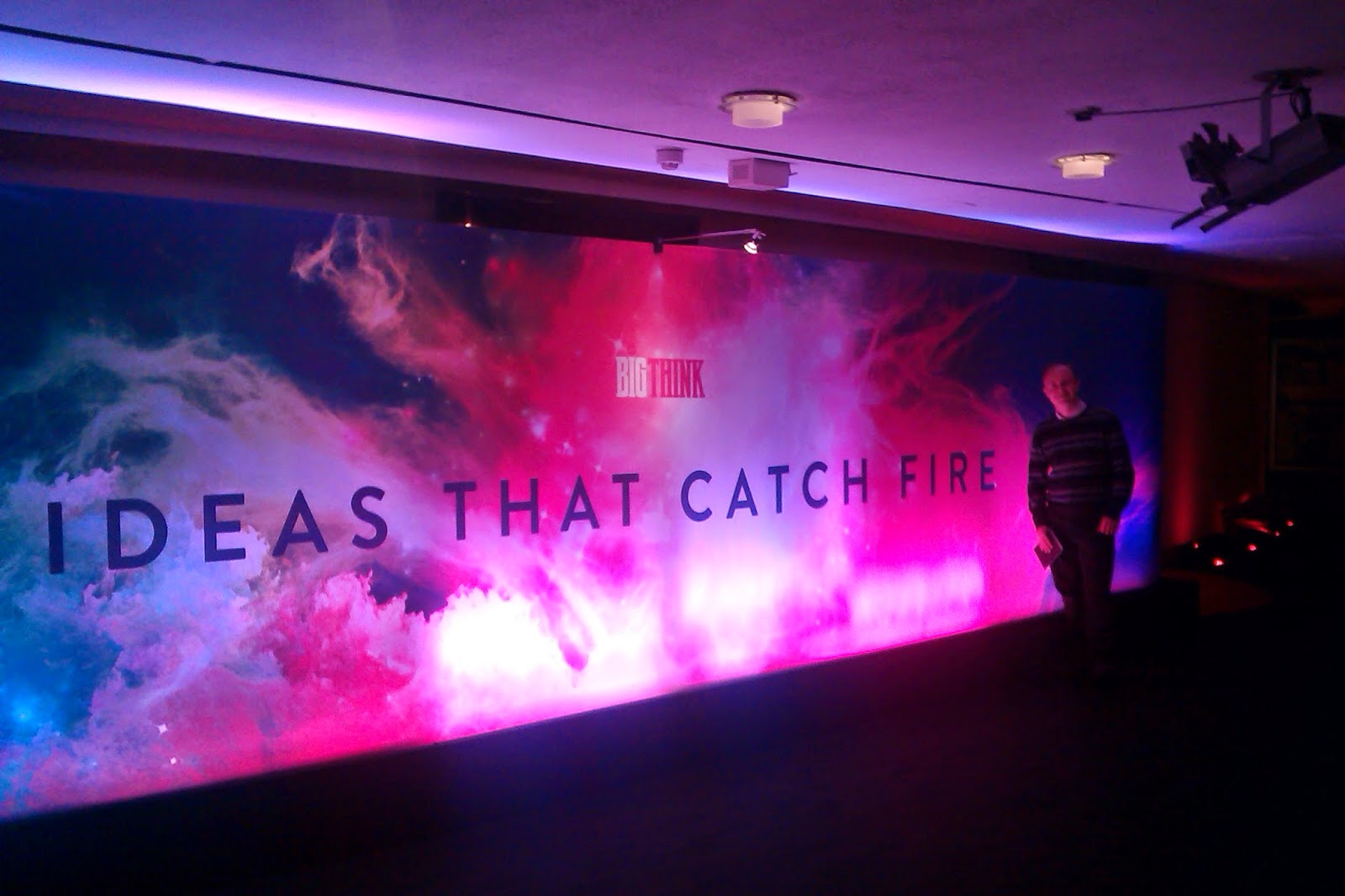 The whole idea of this initial round of ITV’s Big Think was to inspire its employees who were creatively-inclined to ‘think big’ by hearing from creatives who work outside of the business (so perhaps it was also an attempt to make us also “think outside of the ITV box”).  The day left me buzzing with ideas and generally on a high, having got the chance to not only hear from these speakers but also mingle and chat with other colleagues from areas of the business I hadn’t even heard off, but who all had one thing in common – the urge to do something different, and do something creative... 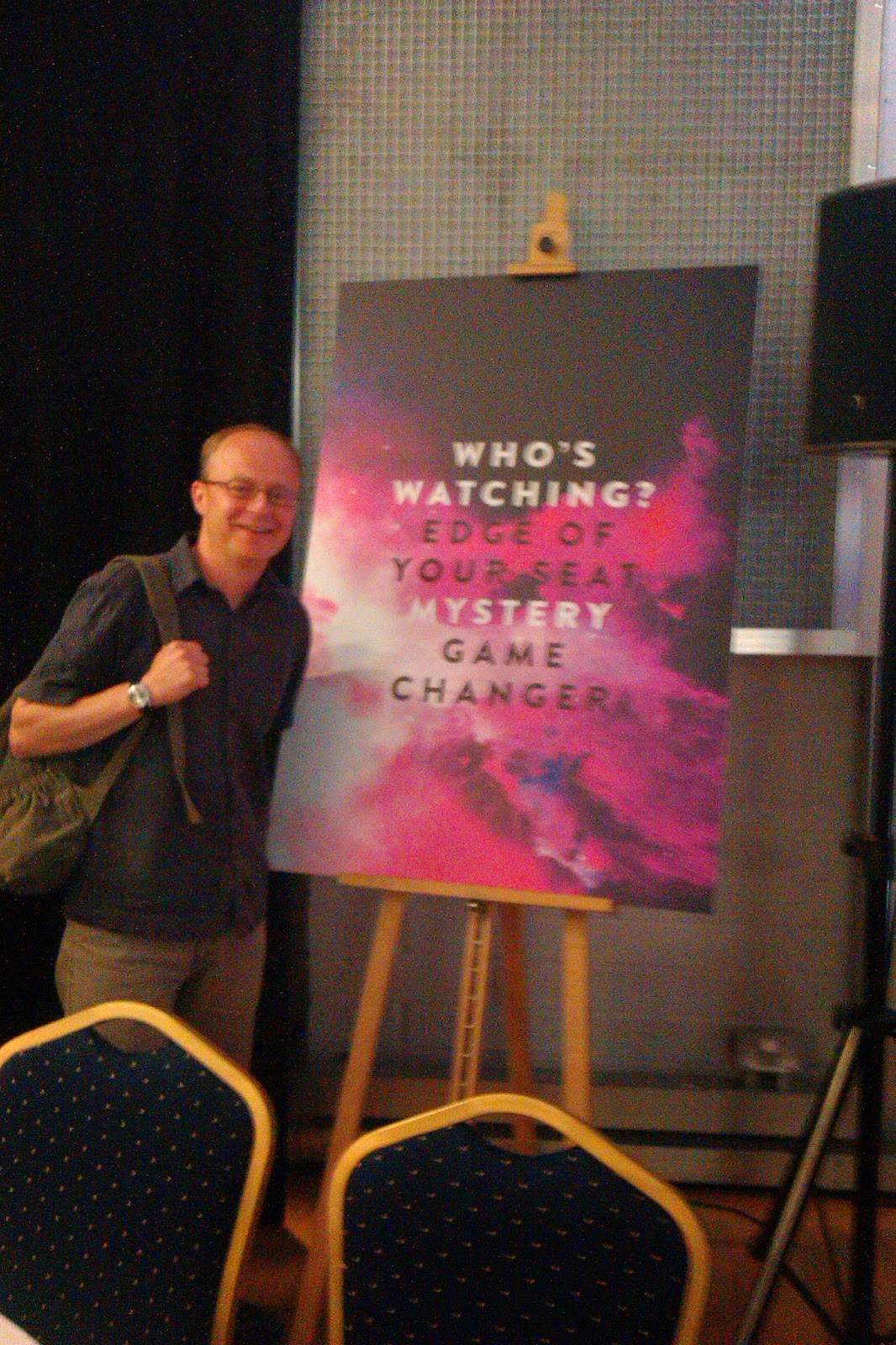 So the next stage of the “Big Think” is in June where we can apply (as indeed I have) to hear from ‘creatives’ inside (rather than outside) our company itself (programme producers, schedulers and commissioners) and get an idea of the kinds of things that ITV is looking for in the next 3 years in terms of new broadcasting. Then the final stage of the year is to apply to meet a commissioner in your chosen category (reality TV, drama, entertainment or documentary) and actually have a pitching session (gah!) – that’s something I’d love to think I’d have the courage to have a go at too, and I guess I’ll never succeed unless I try, so I think I’m going to give it a shot.  Being a creative writer, my category is clear – drama – and my scriptwriting skills will need to be honed a little as I prep and practice the pitch package, but I’ll bring an update by the end of the year here on the blog on how it’s all gone. 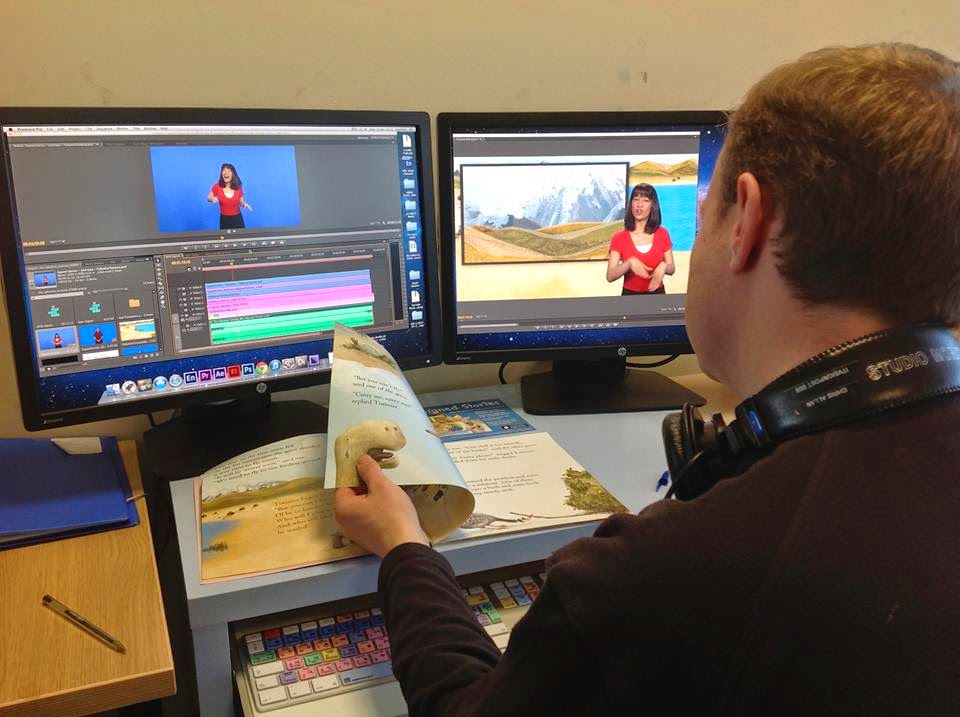 I’ve said this before but it’s really inspiring working in a creative industry (even if sometimes the day job, like any, can get monotonous) but when events like the Big Think come along, it makes the boring days or the long hours you sometimes put in all worth it.  So as I perfect my pitch for September, I’ll happily keep on being creative in the day job with the editing duties on the brilliant Signed Stories, on which although I’m not actually creating the original stories for (yet), as an editor (as I talked about in the embedded section at the beginning of this post) the thing I enjoy most (while developing my editing skills) is that I’m able to bring my storytelling sensibilities to the fore and enhance the narrative experience with small touches here and there...  I’ll end this post with a quote which I stumbled onto recently, listening to a fantastic podcast called “Star Wars Oxygen” (a show which I’d highly recommend!) – and I guess it deals with the overall storytelling ‘package’ that a “broadcast story” like a film or TV show presents to its audience, so struck a chord with myself as an editor and also as I develop my ideas for the Big Think later in the year... 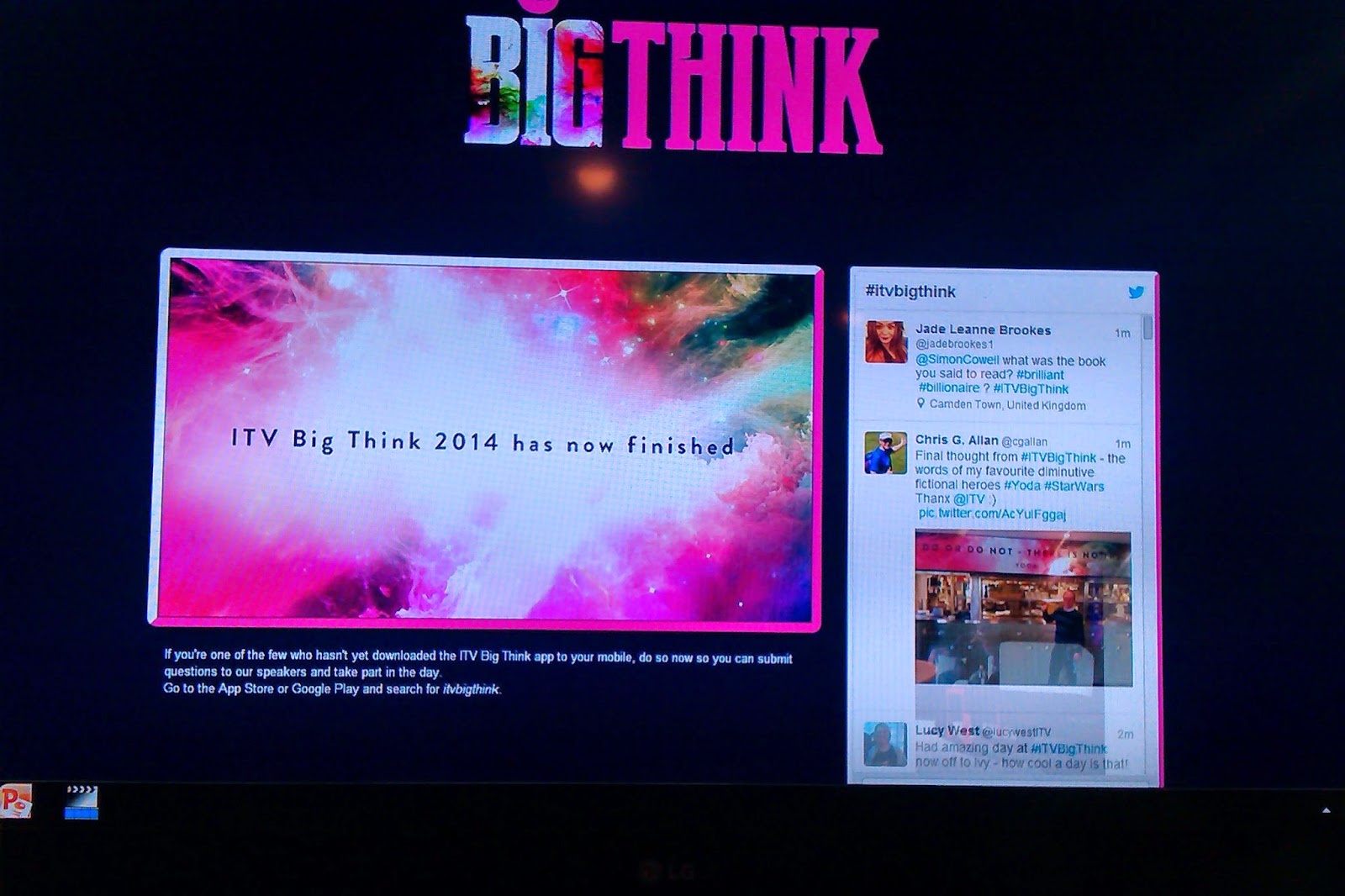 "Editing is the choice of the images,
their succession and their duration.
An editor's dealing with time
which is more of a concern in the musical arts.
Only film and music require
that an audience comprehend details
of a work of art over a given period of time."
(Paul Hersch, editor on "the Empire Strikes Back”)

(The ITV Signed Stories app is available on iTunes for download!)
about writing day jobs film on other writers