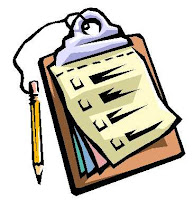 I'm beginning the writing of this post with mixed emotions because I'm excited to bring you the results of 2008's 3rd Moon Crater Fiction Decisions Poll but at the same time it's a melancholy event because this is the last time readers will be able to make an impact on my "Moon Crater" novel since it's the FINAL EVER interactive poll I'll run in conjunction with that story... (But never fear! That's doesn't mean there'll never be another Fiction Decisions Poll run for my writing - there's plenty other planned books waiting to begin, so watch this blog and my my Official Website for more news of this in the future!)

help decide the characteristics of my main heroes of the story, and the equally "logical" Poll # 2 whereby I asked for help in determining the setting of my tale and the place that my heroes called "home", with Poll # 3 I wanted to mix things up a bit (especially since last year was a leap year, and getting 'dizzy' with my writing seemed like a good idea at

the time!). So the brief was set to get more "vague" details from potential readers by surveying them about decisions of "the sights, sounds and other senses" of the world of "Moon Crater"... Rather than being a tongue-in-cheek exercise, this was actually quite important to me because as I went into the re-drafting mode of my novel during 2008 I knew one of the key things I needed to work on was my descriptive writing, and so this poll's aim was to help out with this very topic...


Here, then, follows the results of 2008's Poll 3 (where there happens 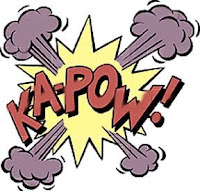 to be a tie, incidentally, I've decided to use all most popular options in my narrative because this 3rd and final poll uniquely allows for that (unlike polls 1 and 2 which only required singular results for each option!)

The Top 10 options from YOU the readers,
for “the Sounds & Assorted Senses of the world of Moon Crater”:

1. The words YOU thought most describes the sound of 'electric rain':
a) “crackling”
AND
b) “sizzling”. 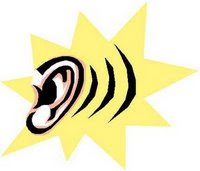 2. How YOU would describe the engine of a clapped-out old van:
a) “spluttering and sneezing”;
b) “choking and coughing”
AND
c) “whirling and wheezing”. 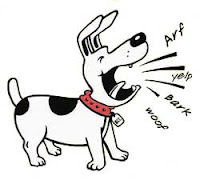 3. The description of an ominous but annoying noise that you couldn’t pinpoint, which would most unnerve YOU is:
c) “a constant other-worldly drone which makes you cautious to continue on your chosen path”.
4. A computer voice barking a command at YOU would most resemble the sound of:
b) “a monotone football results announcer who is bored with their job”. 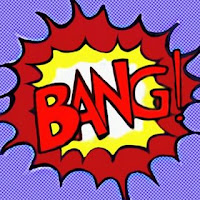 5. In your local shop the whiff of freshly-made sweets would probably be to YOU most like:
b) “an explosion of rich aromas that ultimately make you feel a bit sick”.6. Sometimes when YOU visit a friend, they apologise because their cat makes their house smell of:
a) “musty dampness”.
7. Staying at that friend's house when their parents make the best brekkie ever, YOU would most like to smell:
a) “smoky bacon and fried eggs”.
8. Going to school you walk past a sprawling valley with hills and countryside as far as the eye can see - it most makes YOU feel:
a) “at peace with the world around you, you never want to leave this place”.

9. Old, weathered stone most feels like to YOU:
b) “crumbling and powdery”
AND
c) “solid and immovable”.

10. Opening an old canister YOU would probably be struck by:
b) “a toxic concoction of searing smells”
AND
c) “a sweet mix of something ‘newly-made’ but also past its sell-by-date”.

Now I'm nearing the end of the 2nd draft of "Moon Crater", in preparation for sending the finished manuscript off to potential literary agents, one of the important "detail" tasks to get right is to use ALL of the results of each of my three Fiction Decisions Polls in the story... (if you'd like to see how the first two polls from 2006 and 2007 turned out, then why not click here for Poll # 1's results and then click here for Poll # 2's results... 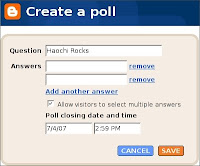 So there you have it. This final Moon Crater poll was aided a lot by being able to allow the poll to appear all year round in a permanent position in the sidebar of this page and it's been so useful that it's definitely a feature of Blogger that I'll be using again in the future! (to find out more about Blogger polls click here!)

All that remains for me to say about Poll # 3 then is a huge thank you to all who took part anonymously on the sidebar poll sections of the blog (you know who you are!) but also kudos to Eelam, C-Double-U & Topkapi-Steve who owned up to sending in their entries and special gratitude to Penny Sumner for her encouragement that what I was doing wasn't pointless and in passing on my poll options to her creative writing students...

I suppose to finish off I maybe better just say someting to round up the whole Poll experience, with this being the final one of the three I've run as I've written "Moon Crater"... It's gratifying now to be able to look back into the dark tunnel from the light end and realise that the crazy idea

I had back in mid-2006 of trying to find a way to spread the word of my story by getting readers involved in how it was actually written has indeed been tremndously successful. With the first poll I gained an inititial inkling and insight into the imagination of kids' minds from the class of eager readers at a local primary school who really took my two main characters to heart and began writing their own stories about them (thanks to all at Throckley First!) "You'll be amazed what Billy can fit into that backpack of his!" their teacher told me. And then in the second poll I found out how inspiring the geography of a place, even when it's a fictional one can be - with one enthusiastic reader commenting, "It looks very interesting (esp. the maps). Keep up the good work." (Thanks, Andy T!).

Overall I'd argue that allowing outside influences in to my writing is definitely not a bad thing, it doesn't degrade or detract from my own creative process as 'the author', as some people have suggested to me during the course of these three polls being out there for all to see... Writing is definitely a personal thing but I think you can learn so much from listening to the views of others and reassessing some of your original thoughts, which is kind of what the redrafting process" is all about anyway...

To round off, then, and to be in danger of over-labouring my point of just how successful I think conducting these Fiction Decisions Polls have been, a recent weekend trip to Edinburgh in this new year turned up an intriguing new "interactive story inititative" being run by a large literary organisation. It's called "The Lost Book" and is really worth checking out if you're into kids writing. (Remember, back, last August, I was harping on about a "lost book" of my own...) The existence of such projects are encouraging to me, the amateur writer, to keep me going and tell me I'm on the right track with my own 'interactive narratives like my "Moon Crater Adventures" and of course 2009's new CGAllan's "Story Starts"... 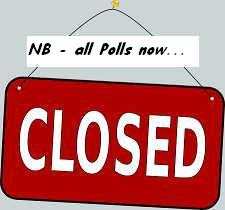 about writing history memories writing and the Web