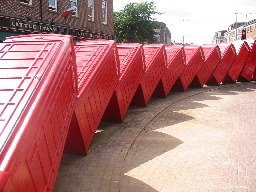 I've got music and mobiles on my mind at the moment... I write best when I've got music playing the background (as I write this, I'm listening to a Billy Joel song called The Night Is Still Young). It's always been the way from being young and at school - music has helped me get on with whatever work I was doing - my art and design homework from school always seemed to fly by when I had a good tape (remember those?!) playing at the same time. These days, whenever I'm writing a story, I mostly have film soundtracks or scores playing. With being an adventure and mystery writer, this type of music really helps tap into the mood I want to get as a writer (some of the soundtracks I like most are from - Apollo 13, Raiders of the Lost Ark, The Last Crusade and the Young Indiana Jones TV series).

Music is important to me - I love specific artists who don't necessarily get very high in the British charts (and most of them tend not to be English singers anyway!) - that said, last night I went to see chart-topper Bryan Adams play at our local football stadium and had a great time. We've seen him before but never in an open-air venue and that really made a difference. Music lyrics inspire and spur me on with my writing, and Mr Adams definitely has a midas touch when scribbling words on a music sheet.


The main thing I wanted to get onto though was that by the time it got dark at the stadium he asked everyone to hold their mobiles (cell phones) up in the air. The effect was amazing and to be honest, breathtakingly beautiful to witness. Gone are the days of polluting the atmosphere with cigarette lighters being lifted aloft by the masses - this is the new concert trend, even if it is a bit kitsch...

This neatly brings me onto another thing about what I'd like to do with my writing (and inevitably Moon Crater). You see, I am well and truly a mobile phone convert. About 6 years ago I swore I'd never ever own one in my life. And then here I am, half a decade later with one chained to my hip, wherever I go. I panic if I leave it at home when I go out to work in the morning, and feel lost when the battery dies on me in the middle of the day. They are, I have to admit, a brilliant invention, and I think, because they're such an integral part of everybody's daily lives, they should prove to be a great literary device for writers. Stephen King has just written a new "blockbuster" about them and a smallish film a few years ago cashed in on the Cellular revolution... Another writer, Carol Clewlow, and one of my tutors on the MA I've just finished, once said, "The great use of mobile phones in novel writing has yet to be seen " and I totally agree with her.

But I'm interested in them from a children's writing point of view because mostly every child from about 7 years and upwards these days has one! They are so much a must-have item for kids now that to write a modern kids novel set today and not include mobile phones would be anachronistic to say the least! "Touch-texting" amazes me - that thing kids seem to be able to instinctively do where they text without looking at their phone and at speed too... It's impressive and I am in awe of the next generation for that alone... Bluetooth technology and text speak intrigues me too (being still a mobile Generation 1 novice) - I know first hand that text speak is an annoyance to teachers today who get homework handed in written partly in that "new language" and partly in Standard English - but to me as a writer, that's a fantastic insight.

So for all the brain melting hype and arthritis side effects 50 years down the line, mobile phones are OK in the humble opinion of this self-confessed former "brick" owner...
music