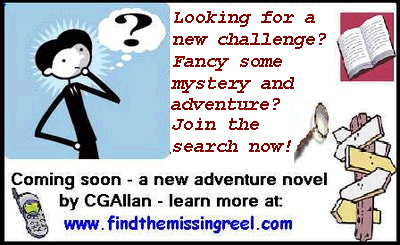 So the journey begins... But first things first - which is it? "BCCarden" or "CGAllan"? That's sort of still a mystery to me as well, really. My real name is CGAllan. BCCarden is a pen name I've had ever since I knew that I wanted to have a life of writing. He's also a character I've created in my head - this mythic, successful writer, who's renowned the world over and... OK, before I sound really narcissistic, let me just say that the two are one in the same, perhaps Carden is what I aspire to be, the dot on the horizon that most days seems to be getting further away the faster you run at it - but that doesn't mean you stop running, right? I mean, in those god-awful dreams where you're running and running and not moving, did you ever stop to realise that you also never get out of breath? I suppose my point is that in our minds and dreams we're super humans, the heroes we aspire to be in real life... Perhaps that was all a bit too deep for 8:30am on a mirky Northern England morning - next time I'll actually tell you about the kind of stuff I've been writing and the things I want to write about in the future... Wow, that was surprisingly easy - I've just written my first blog post!
about writing New Stories