Since I've mentioned before on this blog journal of mine how I love going to the cinema and I've stated on my Official Homepage just how influenced by filmic writing I am, I thought it was about time I wrote a feature post explaining more about just how much a fan of "the flicks" I really am...

My earliest memory of the sheer fun of film is going to the local cinema in our city at perhaps 5 years old and seeing Disney's Bambi on its re-release in the early 80s. The cinema in question was Odeon Paramount, Newcastle which was sadly closed back in 2002 and criminally still stands derelict to this day (rumoured to be on the "de-listing" schedule by the local government because they're stumped with what to do with it - duh, IMAX anyone?!). Looking back, going to this 5-screen cinema on countless Saturday mornings with my younger brother and ignoring the new multiplexes springing up in the 90s, it was the building, not the films that I probably became obsessed with...


Another memory stone or signpost of my experience of the "old Odeon" as I came to call it was going to see Return Of The Jedi there in 1983 as a seven-year-old and having to actually queue outside for it, down a side alley because there were so many people waiting to get in that they spilled outside... (That alley by the way, if you know it, always reminds me of the one they park the Delorean up at in 2015...) But back to the old Odeon itself, and I fell in love with the place so much that when it eventually closed, I even composed my own poem to it whilst on my MA course in 2003...

A Tour Of The Odeon Paramount, Newcastle (1932-2002)
Majestic, classic in style
The old Odeon stood in rain or shine
A shelter for kids, an escape for adults

Art deco, art nouveau, who knows? Whatever,
inside was a feast for the eyes, then the warm,
sweet smell of popcorn hit you next

Sitting in the comfy, front Pullmans
Lying back to marvel at the stars
The ceiling lights and sculpting

The film begins and you watch
Sneaking a look around and then behind you
Watching the flickering, excited faces

Remembering how you stood in line in ’83
How you came with your brother every Saturday morning
And how when they close the place the memories are all you’ll have...There you have it, proof positive of why I'm trying to be a writer prose fiction rather than a published poet! But my fondness for film didn't end the moment I left the cinema... At home, on the small screen, I was introduced from an early age to the gung-ho classic war films and epic westerns which were shown each week night at tea-time on BBC2 by my dad, while my mam showed me the thrill and specatacle of old but colourful musicals and black and white melodramas… This all led me once to (geekily, I know) compile a list of "The Top 50 films I Grew Up With" which I've still got somewhere, so if I ever dig it out of the attic, I'll post it up here, cos it'll probably give some insight into my filmic influences, to be honest... 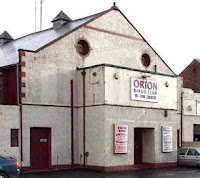 Talking of my childhood experience of film, in the village where I grew up (which I didn't realise until well into my adult years), there was a even a small one-screen cinema standing right under my nose - the Orion, Westerhope. I won't go over what I've said about the Orion already on this blog (read the link in the name there to find out what it was I said) but finally getting inside to see what it's like these days as a bingo hall, and romanticising about how it must have been as a cinema in its heyday, led me a couple of years ago to volunteer at another small working ex-News Theatre in Newcastle in the projection room... 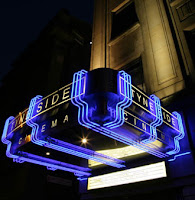 I can definitely point to as another inspiring place to me as a writer... (Indeed, the experience of working with the projectionists there, on quite antique, original equipment was excellent research for the story of Moon Crater and the hunt for the Missing Reel in general...) The Tyneside has actually just been renovated recently to add another screen to it as well as refurbishing and restoring its existing screens, corridors and original features. The Tyneside also has a personal connection with me because I'm told that a great-uncle of mine who was captured in Burma during World War II was actually seen on a newsreel at the Tyneside by our family back in the days of it being a news theatre (the search goes on for that particular missing gem of our family reel collection though...).

More recently in my life, through my day job as a subtitler, I've come across the power that film can have as well. I was given a 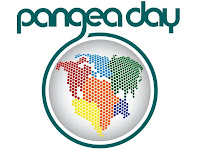 documenary film for Sky Movies Arts to caption called "Pangea Day" and found the subject matter totally engrossing and inspiring - the whole idea is based around amateur and professional filmmakers around the world coming together and sharing real-life stories on an annual basis... and I have to admit that some of the results are really life-changing... I've recently given up volunteering in a charity bookshop in my spare time (which I did for ten years) and have been looking around for new opportunities to use my free time productively to help people, and after subtitling this film, I think I've actually found my new volunteering aspirations for the rest of my life, never mind the next decade...

Undoubtedly, across my life so far, I have to tip a nod to the silver screen for shaping my creative thinking, and it definitely still continues to remain as an influencing factor on my scribbles as I think up new plots and storylines for my characters to follow... On the face of it, written stories on paper and visual tales on the film screen are quite different but the style and pace of cinema storytelling is one which I do feed off and try to emulate a lot, be it scary scif-fi tales, or Western yarns, or even "innocent" reminiscences...

I wonder... is there anything good on at the flicks tonight...?

I'm currently undertaking a Proofreading & Editing Skills Course with Chapterhouse and each time I post on my journal blog here in 2008 as a way of motivating myself to keep going with it (and because it's quite relevant to my writing, really) I'll provide a small update on how it's going...

May's update:
“After sending off my first set of test excercises, I received them back (well within the 21 days alloted for marking, I might add!) and attained a first-mark average of B-minus, which is great, because overall (after the next three parts of the marked work comes back) I have to attain a B-average, so it's a solid start, I reckon, to build on... I need to be more thorough apparently and focus on not re-wording the given text from what the marker's said, which is actually pretty useful to my day job - as subtitlers we're not meant to paraphrase speech we hear on-screen...

In other English grammar/punctuation news but sort of related to the sort of thing you get in these kinds of courses, I stumbled across a test on the BBC website which might be of interest to anyone wanting to challenge themselves out there... You can CLICK HERE to have a go at this "speak proper" English test yourself... 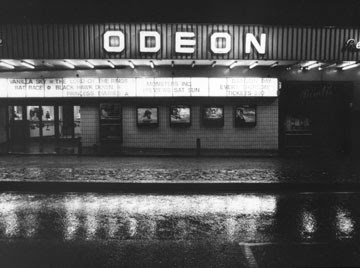