Imagination across the generations... 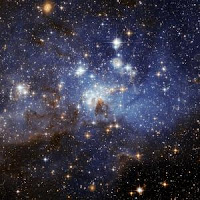 This is my first "feature" post of the new year - it's the kind of post I started this blog journal for and as my own writing news grows and I report it here too, it's nice to get back once in a while to my meandering ramblings regarding some of my favourite themes in writing...

One aspect of the creative impulse going through my brain at the moment is that of "imagination", which I've only really referred to in passing from time to time on the blog… It’s really the sad news this month of the passing of Arthur C Clarke, someone who inspired more than one generation with his own creative musings, that has made me think of the notion of my own personal “imagination generation” of the last 25 years or so of my life. As I entered adulthood and my writing aspirations really began to mature and become more serious (about ten years ago) it was the short stories of this giant of sci-fi fiction (as well as the essays of George Orwell but that’s another story) that genuinely spoke to me and got my creative mind kicked into uphill gear… 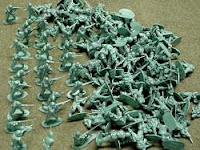 Thinking further back though, this creative impulse of mine to create tales really started when I was about 7 or 8 years old… My imagination was perhaps first sparked by games of my own invention after watching adventure films on TV (another aspect of my writing inspiration that I’ll talk about later in the year) – I was always a bit of a quiet kid (the greatest compliment my dad ever gave me as a boy was to someone else once commenting that “He doesn’t say much, does he?” and my dad replying, “He takes a lot in, he’s a thinker…”), I was just always quite content with my own company, creating imaginary worlds and stories with my toy Lego and especially my plastic soldiers. From the industrial guerrilla raids of my 1:72 scale armies on my dad’s sprawling model train layouts in the outhouse to the jungle warfare of my 1:32 scale platoons in our quite large back garden, across my parents’ rockeries and wildlife pond, I remember envisaging intricate plots and complicated action set pieces for games in which I knew the exact outcome from the beginning. I knew who the bad guys were, who the heroes needed to be, who would turn on who during the course of the story, and how things would play out. I often think it’s a shame I didn’t ever write any of them down at the time, but I WAS only a kid, flexing my storytelling brain for my own amusement and sheer fun of doing so - these were the days of real boys' own adventure stuff for me...

It’s quite unfashionable maybe these days to say that you like adventure war stories but these were imaginary and pretend, just as fiction books are withdrawn from reality, even if they might be based on real events. And as I approached my early teens, I began collecting Action Force figures which were based around a fictional anti-terrorist unit (a bit like the 24 CTU team of their day). At a time when everyone else in my street was into Star Wars figures, I happily created games with the lesser-known Action Force toys, turning the stairs at home into different levels of secret underground bunkers where the evil Cobra terrorist group held their stronghold.

My romanticising of the high-adventure of the soldiering life and in particular conflicts of history, later led me as a young adult in my mid-teens to join a local wargaming group, where small inch-high lead figurines recreated famous battles for us. Myself and a friend were the only ‘young’ recruits among some anorakie ‘old general types’ who passed on their sage knowledge of strategy to us each week when huddled round a Calor gas portable heater in a small garage, scrutinising a detailed scale model of a battlefield from The Seven Years War or some unknown valley in Carthage in ancient times… 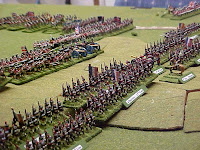 I’ve always wanted to write a historical adventure novel told from a child’s point of view, and perhaps after finishing Moon Crater I’ll get on with that task, but I don’t mention all this love of battles to say that I’ve got some blood lust for war… I abhor war and everything about it. But as a boy I have to admit that’s where my sense of adventure did come from…

But as the letter of St Paul goes, when I became a man I put away my toys and left them behind... I obviously couldn't imagine sitting down now and making the kind of sound effects I did as a kid with my Action Force, toy soldiers or lead wargaming figures, but the essence of what I was doing with those games, actually creating stories and practising the art of tall-tale telling is still very much current in my thinking today... There's a film due out in Britain over the next month which I'm looking forward to seeing because I'm hopeful it recaptures what I'm trying to put across here - the imagination of youth is an amazing thing, it's called Son of Rambow and I'll be interested in what it has to say about the limitless powers of a kid's mind when it comes to storytelling:

If you're a returning reader to this blog, you'll know that I have a love of science fiction 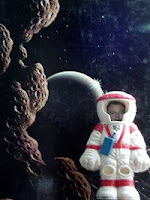 and it's this kind of "gaming" with creative storytelling that I prefer today and have come to replace my "war games" from my younger days with. (On a more self-conscious, responsible level too, I find it easier and more palatable to fantasise about space conflicts than ones in the real world here on Earth nowadays anyway - but revell in the fact that the best science-fiction stories can really deal with some hefty political issues and conflicts from our real world) As I said at the opening of this post, it was probably picking up a small book of Arthur C Clarke's early space stories that really got me into written science fiction though, especially a two-part story written decades apart which dealt with astronauts disgarding a prototype pen in space... (I'll have to look up the name of the story again sometime as the name of it escapes me at present!). I've always loved the Disney-invented Portmanteau word "imagineering" and to me Clarke was a true imagineer writer. If I can emulate even a little of his truly inspirational and life-changing writing as I continue to grow and mature as a storyteller, who knows, maybe one day I could even graduate into becoming some kind of 'imaginaut' writer of rollicking sci-fi boys' (and girls') own adventure myself...