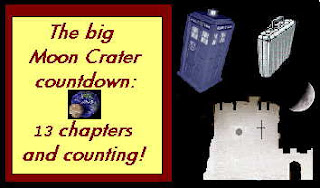 3 things that I've achieved this week with my writing:
*** I've come to a dazzling realisation and important decision about this journal blog...
*** I've made some giant leaps in forwarding the story of one of my sub-blog pages...
*** I've placed a certain bowler-hatted slapstick pair more in Moon Crater than I realised they would be...

A sentence from the newest chapter of "Moon Crater":
Jo looked at Billy with as much shock on her face as he felt in his head. "We're back to the same question as at the start of the week - what on Titan is the combination to this thing going to be?"


With Chapter 13 getting finished this week, I've officially reached the halfway point of my novel - the way I've plotted it in my "Moon Crater Bible" it's 26 chapters long - and so this is a real milestone for me. For quite a while whenever anyone asked me how far I was on with the book I'd say "Oh, about a third of the way there", so it's a relief to tell those same friends now that I've just past the midway stage...

The 6am get-ups have gotten harder but on those days that I have managed to get up for that hour before work to write, I've felt like I've really produced some fine work... I haven't mentioned this before but I've also got one "late shift" a week at work, where I don't have to go in until 11am - on these days, I still get up at my normal time and get in some extra "early bird writing", which is great too. So all in all, this potentially "difficult" first draft is going well so far -I was talking to a fellow writer and book enthusiast last week who said he read a great piece of advice about first drafts which is, “Make your first draft exactly that – a first draft - don’t fiddle too much with it, but simply allow yourself to make mistakes!” - I think this is really true and a great tip to get your momentum built up as a writer - "just keep going and don't look back" (but also keep a "continuity notebook" for when you make the odd mistake along the way!)

Last week as well, I've realised, I forgot the promise from the end of Week # 1 to talk about chapter titles. This has become important to me this week and last as I've changed the titles I'd originally had down for both Chapters 12 and 13. The original ones were just never right, and until I got up to actually writing the chapters themselves, I've been able to conveniently ignore them. What were they and what are they now? Well, I won't do this very often but as a teaser, I can let you know that Chapter 13 is called “The Right-on-Time Machine”. I'm only doing this because I know how when reading a book I've found I love to sneak a peak at the next chapter title to give myself a hint of what’s coming!

Part of Chapter 13's themes involve the history around Billy and Jo's village. They don't think so but I actually happen to think history is amazing - Only this week, I spent a lunch hour standing on top of the roof and climbed the bell tower of the oldest church in my city, St Andrew's, Gallowgate, and I saw the city I thought I knew so well from growing up here, in a whole different light... But as well as this, I also think that it's knowing history has its own place and remembering those living in the present that is more important than getting lost in history, (one of the themes of Moon Crater as well as my new micro story The Here and Now talked about in the News section below).

So I'm finding a real joy in these first drafts of new chapters - with Ch12 last week, I had a rush of satisfaction when finally writing a description of a scene involving a bin wagon! You may smirk but this harks back to a backpacking holiday around Europe four years ago when the image first came to me standing on a balcony of a pension in San Sebastian and I watched the ballet-like movements of these strange machines on the dusty streets below... But back to Chapter 13, this week, and it holds the joy of discovery for myself as well as that of Billy and Jo, and eventually the reader - it involves the opening of a mysterious silver suitcase that made an initial appearance in the prologue of the book! (yep I'm that old-fashioned that I've planned a prologue and epilogue - this comes from my love of the old "Quinn Martin Productions" TV shows I saw as a kid, like The Invaders!)

In my other writing news this week:
* I've made a big decision this week and decided to re-skin this journal blog – the unofficial "Top Secret" template has served me well, but for a long while now I've been aware that some browsers just can't see the outline of the Top Secret files when they log onto my blog. So in a continuing effort to try and make my sites user-friendly and accessible to all I'm going to opt for a "minimalist" look to start with but with the magic of Blogger engines, I'll be able to slowly custom design it really well as the year goes on... So watch out for my own sketches of what the world of Moon Crater will look like over the coming months, appearing around the posts here to decorate the blog more uniquely...
* The other main news this week is that I’ve added more intrigue (hopefully!) to what exactly "Moon Crater Adventures" talked about in Jan this year is all about – concept art to help me write the tales will appear there soon, plus an thrill-packed NASA video I’ve borrowed to help build anticipation of the action and adventure to come!
* I was overjoyed this week to discover that the Indy story I’ve been co-writing for almost two years,"Indiana Jones & The Curse of the Chinese Whisperer has now has been awarded 5 stars for "Excellence" on the forums at TheRaider.Net! You can catch up with the story here now!
* It's been a mega-filled 7 days this week because I’ve also posted a new story on Flash Fiction page - it's called The Here & Now and is all about the possible pitfalls of a devotion to history... There'll be commentaries to come for the short short stories on that page soon too...
*Lastly this week, (I've got to get into my serious voice mode now), I've also got to report on a website I stumbled onto this week whilst egotistically searching for my name, "CGAllan", in Google - http://thetimewarpspeaks.googlepages.com/home - It's a curious webpage and I haven’t quite worked out who exactly the "Time Warp" is yet and I'm not sure whether to be worried or chuffed that someone's following my work so closely – but one thing's for certain, I'm going to bookmark the site to my favourites because something tells me this Time Warp character's gonna be a thorn in my side with the "secrets" he wants to reveal...

Books or writing I'm reading and looking at this week:
- Harry Potter Year 4 - I've finally got through Book 3 and began the mammoth-looking Book 4 my copy is the American version and have brilliant illustrations at the beginning of each chapter!
- Temporary site for the Live Theatre, Newcastle (Flash Required) - The Live Theatre is a brilliant place right on the Quayside in my home town and is being refurbished at the moment - but this website is inviting the public to add their own stories to it - I might just give it a go!
- One writer's advice on finishing a novel – Maggie Gee, a writer I once heard speak, gives her tips on getting to the end of your manuscript!

Next week: Chapter 14 heralds the beginning of the second half of the book and our heroes are now deep into the mystery that's been building since Chapter 1... It's a confrontation chapter which sees them face off against an unlikely foe...


"dark" & "key"
about writing writing and the Web