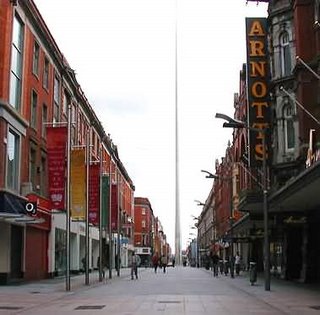 I visited Dublin last weekend. One of my best friends lives there and he's an usher at my wedding soon - so it was a kind of "pre-stag do thing", cos he can't make it over for my official stag party in a few weeks' time.

I first met Damo at work about five years ago and we hit it off straight away. He's moved back to his home country now but we still keep in touch a lot and travel back and forth across the water to visit one another frequently. I think that's probably the true mark of a friend - making that extra effort not to let things slip, even when there's a lot of distance between the two of you (or even when there's not).

Anyway, apologies to Damo, but this post is really about Ireland as a whole being an influence on me as a writer (of which, my good friend is a part, of course, but my association with the Emerald Isle goes back a little farther than when the two of us first became friends at work.) Historically, I have links with Ireland from the days before my life began. (Incidentally, I find it really difficult to get my head round the fact that history, the years before you even existed and are aware of the passage of time yourself, isn't just something trapped in the whispers of family stories that get passed down or etched permanently in a book, waiting for you to pick up and read about) A branch of my family, although, there's probably a good deal more, came from Ireland originally - namely the Sweeneys on my dad's side. They are meant to have lived in the Waterford area. And on my first backpacking trip to Ireland, that's the area I camped around... 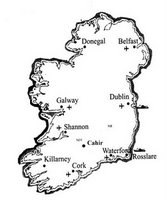 years from that first trip and I've been to the country 8 times. It's not only because of how cheap it's got to fly back and forwards, but more perhaps to do with what the old school friend I travelled there with back in '96 commented with when I talked to him last week. He said, "You should branch out more, because Ireland is like your comfort zone now." It's not the only place I've ever visited outside of the UK but I'd say Ireland IS a place I find comfortable, but I think he meant it as more of a cutting remark than I'm prepared to take on board. Maybe I'm drawn to the place because I once discovered a town called "Callan" there - get it? It's like "C Allan" - or maybe it's the green-ness of the country - not only in the scenery but in the fact that they have detergent-powered buses in Dublin and they won't automatically give out huge bundles of polythene bags at the supermarkets and shops. Whatever the reason, I love Ireland, and I don't intend to stop going back and discovering more and more about the place as I travel through my life.

So far on my jaunts to Ireland, I've journeyed to Dublin, Waterford, Cork, Galway, Kilkenny and seen smaller towns like Carrick-on-Suir, Cahir, Cong (where The Quiet Man was filmed), Westport, Clonmel, Ben Lettery, Clifden and Tipperary. I've travelled by ferry, Bus Eireann and Ryanair, stayed in plush youth hostels with plenty of people around (sometimes too many snorers though) as well as sleeping in more remote backpackers stops and barns in country farms. I hitch-hiked (flashing my knees at passing drivers), climbed Croagh Patrick, kissed the Blarney Stone and met some brilliant people (some Irish, others European and Americans) along the way. Overall it's a fantastic country and I'd recommend a trip to anyone - the people are friendly and it's a definite "holiday" when you've been there. 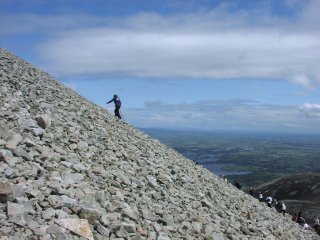 Anyone who writes finds their words tainted and formed with the memories of what's gone before - not only from those whispered family stories and the history books, but especially and very, very importantly from the writer's own life experiences. So whenever I sit at my writing desk, looking out of the window for inspiration, I'm thankful that my many trips to Ireland and the fantastic views of the land there will always come back to me when I pick up my pen or tap away at my keyboard...
about writing history memories on other writers travel