I'm not quite sure how to begin this post but it's got to be put out there so here goes... Recently I've been taught a bit of lesson in humility with my writing and it's led me to realise that part of being a successful writer is knowing when to admit that you've made mistakes and when to let go of something when you know it isn't working the way you hoped it would...


Since the early days of launching this blog and my main website I've become a little too obsessed with developing the 'sellable product' of "CGAllan" I think, always on the lookout as to how to harness the potential marketing of my writing on the Net. This led most recently to an attempt to set up my own Wikipedia page for myself (yes, I know, how vain!) - anyway, the page survived for about one day before it was voted against and then eventually dismantled by the moderators there. This in itself is fair enough and overall it was an interesting experiement for me, but one of the reasons given for objecting to the page was that "this person appears to be mostly self-published on the internet", and that has really sat badly with me...

Vanity publishing is something I've really, really resisted when looking round at the printed book landscape - I've never wanted to self-fund my books, I've always intended to pursue the path of finding an agent who sees the worth in my writing and actually begin to make a proper living as a bona fide published writer. True, I've put up my own story pages online, which anyone can find on the Net, but these are only my earliest forays into the writing life, which I've always seen as building towards a sort of "online writing CV".

The upshot of my failed Wiki attempt, as I've indicated, is that it's made me stop and reassess where I stand with my writing as a whole. The Moon Crater novel is still ongoing and proceeding at a good pace, but I think it may be time for me to drop off the radar a little, in regard to my other story pages... So now I'm beginning the process of centralising all of my various story pages, trying to allow them to be only accessible through my Main Site - (it's "time for silence" as Billy or Jo might say...) There won't be any self-referential links to those story pages on this blog or any other - readers will now have to journey through my Official Website to find each of my "Featured Fiction" pages...

The second part of this reconstruction (and almost deconstruction) of my online presence as a writer comes in the form of a set of "hackers" who about a year ago first made themselves known and whose machinations have since sort of taken over a lot of my creative energies and ultimately time which I should really be using to write Moon Crater... So in true Scooby-Doo fashion, I'm unmasking the crazed mastermind of the "Time Warp" as none other than... myself! (and I would have gotten away with it too, if it hadn't been for those darn Wiki kids!) This admission is probably not that much of a surprise, really, to the more "eagleyed" amongst you (pun intended!) but the whole experience of the Wikipedia fiasco has has brought something to mind which a lifelong friend and severest critic once said to me - "You shouldn't play with the trust of your readers"...

The original idea behind the "TWI" was really just to have some fun and act as a way to build anticipation for the novel and also to lead readers in the beginnings of joining the dots to the clues to Moon Crater's story, which I scatter about online througout my story pages and blog... I've said before how I adore TV shows like Lost which have "extra" games for fans which exist outside of the main programme and I guess I was also trying to honour this emerging tradition, trying to use various internet tools to capture this intriguing kind of "interactive game". (I also had in mind Orson Wells's 1938 hoax broadcast but should have remembered that I'm neither as much of a genius as he was nor have as many people "tuning in" to my blog and webpage...) Overall, as an experiment though, the TWI pages were successful and I'll be putting the lessons learned from them to use later in the year when I launch the main mission for "Find the Missing Reel" through the website. I do think now is the best time to let the "Time Warp" disappear into the ether as I head more seriously towards trying to get my book published - it started out as a good idea with lots of potential but somewhere along the line that alter-ego just seemed to get a bit angry and it's not really the writing voice I like to use all that often...

All that said, however, I'm still very interested in how readers (and fans?!)

view my website as it continues to evolve as well as my writing, and so I'm replacing the main TWI page through the backwards clock object on my Official Homepage to try to help me in a way, take a step back and look at my work from a different angle... "The Flipside of Words That Hide", then, will be a view from an alternative perspective, as a reader might interpret my words online... It won't give all the answers but rather some good starting points for intrepid story explorers to trek off on (but of course, myself being myself, there'll probably still be a few red herrings in there too!) - so all I can say is, watch that space and see what develops there, really...

So for not really knowing how to begin this post, it's been kind of a cathartic process, writing all this down - purging my "fraudulent" side and apoligising to readers for misleading them... It's fun to take people on a wild goose chase but by the end you have to make sure there's some reward for those who journeyed with you.... Suffice to say there WILL be a treasure on the horizon but I'm sorry if I've lead anyone down the garden path with the Time Warp's musings over the last year... Rest assured, I do feel a little embarrased to say the least, and a lot like the boy who cried wolf, (or should I say, the knight who cried dragon?!) 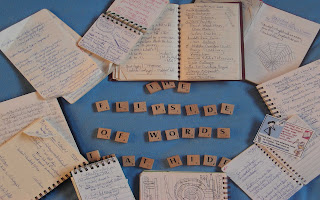 As for the Wiki experiement, who knows, maybe one day I will reappear on there, once Moon Crater is published and I'm deemed "important" enough to be added. (But will I deem it a site important enough for me to be on by then?) Anyway, childish bitterness aside, the text I created for my Wiki page will probably be used on my "Contacts" page through the mobile phone on the website when it's set up later this year... Overall, this whole sort of narcissistic journey with the TWI and Wiki over the past 12 months taught me, like John Hammond's scientists, that I should have been less preoccupied with what I could do with the Net tools at my disposal and more with what I should do.... I guess, sometimes less is more (or at least I'm hoping that's the case now!)

"So, is that really the end of the TWI?" you may ask... Well, they're now officially disbanded, yes, but their shadow will live on as their video remains central to help solve the elusive "Zip Code" which will launch in the summer - I wonder, will YOU be the one to crack the Code?


about writing writing and the Web