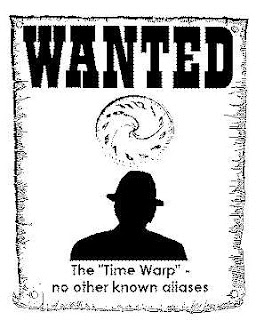 It's a sad post to begin my 'new template' look to this blog but it's also an ironically fitting twist in my "Year of Fear" motif that the mysterious Time Warp, a fan I reported on a few weeks back in the News section has taken a step too far this week. As I said, I intended to keep a close eye on developments over at his 'fan' page and apart from a few grumbled ramblings about me being too cryptic about Moon Crater, it appeared to be harmless stuff... But yesterday, lo and behold, there appeared on his page a YouTube video which shows my very own study and desk!


At the turn of the new month, he seemed a tad perturbed that I hadn't (and still presumably is because I still haven't) fulfilled my "promise" of something appearing at my official site through the gnome icon on the desk top - "May 2007" - this was a sort of clue by me for launching a secret page in May, but it was also a motiviational message for myself to keep being creative throughout this year... Unfortunately cos of my "big write-up" beginning in the same month I haven't been able to launch the planned new page (more on what this ultra-secret page is later...) but this didn't stop the Time Warp on June 1st on his homepage launching his own "vague" threat of action to be taken just because I'd changed something on my blog about the "May 2007" hint... 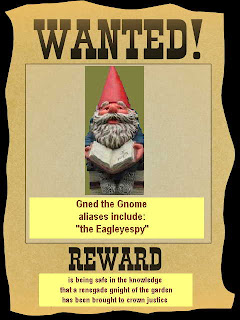 But now, he's uploaded a video onto You Tube of my own study - my inner sanctum, my quiet hideaway to stop and think about the worlds around me and inside my head... No prizes for guessing who helped him gain access to my writing room - my disgruntled ex-assistant Gned the Gnome (evidently going by the mantle of "Eagleyespy" these days...) - I knew I should have asked him for my spare key back! I'm just glad I keep all of the most secretive Moon Crater secrets locked away in a combination silver briefcase which only I know the code to...

This is where it gets personal though, because the brain that appears at the end of the video on my desk was stolen by these hoodlums - they've kidnapped my inspirational snow globe and I'd appreciate any info as to its present whereabouts... I used it as a muse when I'm writing and some of my best ideas have come out of that brain (so to speak) - I just hope my brain paperweight was the only thing the Time Warp and Eagleyespy took...

Not only all of this, and this is perhaps potentially worst of all, I suddenly don't know what to expect next 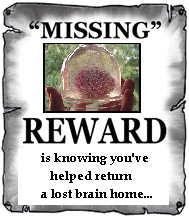 because at the very end of the video is a more obvious threat of "hacked pages" over at my official site... With Twig (my former web designer and adviser on all things "tech") incommunicado, deep into the Arctic tundra on a trek returning his designer penguins to their natural habitat (I tried to point out that the Antarctic is where they were from but he wouldn’t have it, so he’s going to be gone even longer!), I don't know how I can defend my site against such a hacking premise... I guess I'll just have to wait and see what happens next... (and so begins the Year of Fear!)

I can't let it stop the big write-up though - so apologies to any genuine readers and fans out there for this rant - I just had to write the anger out - rest assured, our normal programming of the "Big Moon Crater Write-Up" will resume unaffected next week...

(Addendum - On April 1st, 2008, CGAllan uncovered the game of these "hackers" but decided to keep the original “exposè” video to his blog sidebar because it adds to the mystery of his Moon Crater novel…
writing and the Web