I've been reminiscing a lot about years gone by in 2008 (the reasons for which I'll make properly clear in a couple of posts' time), but in particular this month I'm recalling an undergrad study I took on around the time I first got into serious fiction writing which looked at the idea of "obsession" being used in Modern American TV comedy, (focusing on Friends, Fraiser and Seinfeld). In those days, I was already studying a uni module on TV comedy in Britain and this theme had emerged in UK sitcoms too... But looking at it from my perspective now as a general writer of fiction, the theme of obsession is actually one which has peppered my creative tales in the ten years since I've begun my writing life too...


When we first met, my wife used to call me a “worrat” because I'm the type of person who dissects things to the Nth degree and can tend to worry about miniscule issues, but this does all help to feed what I've come to nickname my "writing anxiety" in which I put quite a bit of pressure on myself to perfect stories I create through research and redrafting till I'm happy with the end result, (almost like a 'quality control', if you like!)

I, myself, have always, if I'm honest about it, been a bit of an obsessive person though. One of my current obsessions is a geeky one involving 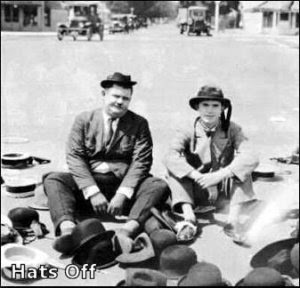 collecting the films of Laurel & Hardy which I thought I had more or less complete with a big box set I got last Christmas, but only recently discovered there's still some missing (reels!) from within the collection. It's this sort of "geek fandom" of a series of films that is precisely what inspires and interests me with my writing. Indeed, thinking back even further, I once broke my ankle during my latter years of high school and along with my brother and friends who came to visit a very-bored-me created what's come to be known today as the "Winkledown" radio comedy series (the eagle-eyed amongst you and regular readers of this blog - there must surely be a couple of you out there - will notice this Winkledown key word that's been mentioned by me here before...) Anyway, to cut a long story short, the third tale in this illustrious set of village stories went walkabout and was never found again, and since they were recorded on old C60 audio tapes the myth that arose was that it probably got chewed up, but I'm

still obsessing about that lost gem to this day, hoping it will turn up in the back of my parents dusty storage cupboard sometime soon... I CAN promise though that the Winkledown series as a whole won't remain "lost" forever because in 2009, I do plan to launch a webpage through my Official Homepage that explores this landmark (for me and my friends at least!) series, complete with audio clips galore.

I can also be a bit of an obsessive collector of anything I happen to get into at any particular time... From obsessing about collecting timelines and all things Indy, I pretty much exhaust most avenues of things to do with my "chosen specialist subject"... But I would say that getting into this mindset does help me as a writer. Ab

out a decade ago, around the time I decided a life in writing was for me, I watched a great three-part series on the BBC called "The Write Stuff" which gave advice and hints about how to go about becoming an author. The series culminated with one "final tip" which was that to be a successful writer the bad news was you really need become a megalomaniac in order to keep a firm grip and control on the material you're creating... Well, this show has had a big influence on me developing as a writer over the past ten years, as I always remember that key piece of advice and probably led me ultimately after many years of preparation "off the page" (or screen!), to just over two years ago now launch myself and my creative writing on the Net and become a "blogaholic"... (a nickname my wife now has for me!)

When it comes to the point of me starting this whole "blogging obsession" of mine, namely to document my journey in creating my fledgling children's novel, I'd have to say that it's definitely fed my addiction to creative writing and continues to spur me on towards the final finished manuscript... I'm happy to report in this post and at this latter stage of the year that my "Big Type-Up" of the "Moon Crater" book is nearing completion... and it's no coincidence that the theme of "obsession" does run right through the tale... Indeed, in my mad, mad, mad, mad world of "Moon Crater" it's not just a story of "one man (or woman's) obsession" that drives the story, but that of all the main characters, really, for one reason or another... As Draft # 2 continues to fill my waking and sometimes my non-waking hours, I've come to realise that my own obsession with getting it finished and finely-tuned as an overall 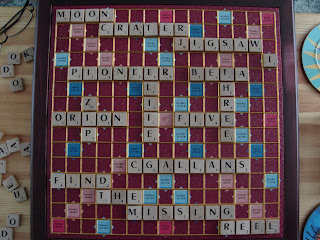 "published package" MUST come to an end soon... "The Devil is in the details" as they say and I’m finding all too often that I'm now at the infuriating stage of nitpicking and second-guessing myself at whether to put a full stop here or to captialise the name of an organisation there... When 2009 comes, I'll just have to let it go and spread its own wings I think, and see if it can learn to fly on its own... Another fun example of my recent research obsessions with perfecting the "Moon Crater" story has to be shared here though - I mean, did you know there's a whole set of false telephone numbers out there reserved for drama/fiction purposes? (I always wondered what would happen if I ever tried to ring one of the on-screen numbers on the side of a van or in the window of a caff in Coronation Street!)

Getting up early in these darker late autum and early winter mornings now, things are quite different to my first draft Big Write-Up and the bright perfect sunrise mornings I enjoyed during the summer of 2007... But I have a cosy writing room all set-up, complete with a warm desk lamp and my slippers close at feet... Unfortunately my laptop is really starting to give up the ghost now, after months of warnings - syntax errors don't even enter into it any more because more and more it just feels like an

old TV with a tube that's about to blow any day, and so I'm resigned to the fact that a new PC is on the cards in early 2009 - which should actually be good all round for my creative writing and webbing activities...

I suppose at the end of the day, the theme of obsession can definitely have its darker side but actually it’s the lighter, more comic side that I’ve always been more interested in... Of course, coming full-circle, as the megalomaniac writer I am, I'm hoping that readers (and dare I wish, "fans"!) will become obsessed with the build-up of the story of my kid's tale... So... to drench the appetite a little more now that the dark nights are upon us and as a sort of collection of early "Moon Crater" festive treats for readers of this blog, I'll end here with an exclusive slideshow for you to ponder on containing most of the things that I’m currently obsessed with in the 2nd draft of the novel... (an added bonus too is that all the still pictures contained on this very post relate particularly, even if cryptically, to the book's story as well!)