- July 21, 2007
# "The disappearing nature of the people we have been, we have begun to change..." # - Adam Duritz
The grand plan: to finish the novel I've been working on for about 8 years over a period of 5 months! All of the planning, plotting and preparation is over, it's time to just get down and write the blighter! Hopefully along the way I’ll be able to pass on some tips for other first-time writers as I discover them myself! So with a working title of Moon Crater, this is my week-to-week experience of its creation to complete-draft stage... Chris G. Allan (May to Sept ‘07) 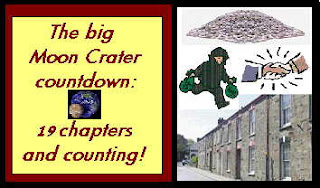 3 things that I've achieved this week with my writing:
* I've written out the main denouement/twist of the book...
* I've been reminiscing about some early writting forays into comedy writing - a useful memory...
* I've been upping the book's "emotional ante" more (or so I hope!)

A sentence from the new "Moon Crater" chapter:
Right at that moment Billy's life changed - his ideas and opinions about the people and places around him would never be the same - all he could do was stare back and ask, "Is this the truth?"


Next week my wife and I travel to London to celebrate our first wedding anniversary - a true milestone and one we’re looking forward to with disbelief as the past year seems to have flashed before our faces with a single blink of the eyes – we’ve been to visit our capital before but the memories of it bring to mind that fateful phrase you hear as you get on and off the Tube – "mind the gap"... It’s sort of relevant this week to my chapter writing because even though it’s possibly the most important chapter of the whole book I’ve also felt like I’ve needed to do a little “padding” to fill the gaps in it and make it feel like a similar-length chapter to the rest of them (although, here, I'm aware that I probably sound like I’m suddenly contradicting myself from a post here a while ago in which I didn’t believe all chapters had to be equal length!) – but I keep consoling myself with the fact that there’s a myriad of ideas I haven’t found a place for in the novel so far, so if needs be on the second drafting, I could insert some here, if they’re relevant to where the story’s up to at this point...

I’ve been reflecting on the chapter write-up blog posts I’m doing here a lot this week, not least because I’m always aware that I promised to try to offer practical advice (as I experience things for myself for the first time too, more often than not) to other wannabe writers. And it occurred to me that these posts are actually like DVD commentaries (sorry, I’m a huge fan of film and TV so often use them to make analogies!) – once the book’s finished and with a bit of luck published and out there, I and everyone else can look back at these posts and compare them to each chapter they correspond to… (Writers have random thoughts all of the time, and I think that’s possibly one of my more random notions this week but I just had to share!)

Anyway! Onto the main course this week (see, not only TV & film imagery but also food analogies that I can make – probably because as I write this, I feel very hungry!) – Chapter 19, as I’ve said above is potentially the most pivotal and shattering part of the story, in terms of the final "denouement" of novel being delivered. Billy finally understands all of the double-talk and swindelling that’s been playing out in front of him, and I’m really looking forward to working out with him in my writing how exactly he deals with it in the coming final chapters. As you’d expect (although until now I hadn’t given it a lot of thought) this closing part of the book is loaded with emotion and the potential of this to give the climax the punch it needs isn’t wasted on my simple mind any more. It’s really weird, and I know I keep banging on about the evolution of the story as I write it, rather than in the planning of it beforehand, but I could never had plotted this before – I knew from the start I wanted some touching moments at the end to make the reader smile satisfyingly, but after writing Chapter 19 out now, I’m full of hope for just how much of a smile readers could have by the final page of the book...

In other "Moon Crater" news this week:
- I’ve been working on a “top secret” new story page this week codenamed “Winkledown” - I’m actually not using blogger like I usually do for this but have discovered “googlepages” (ironically taking my lead from those troublesome hackers on my homepage who use that same design engine) - anyway I’ll tell you more about Project Winkledown once it’s finished (in the next few weeks, hopefully) but I promise it’ll be something to smile or at least smirk about...
- I've added the first "Moon Crater" Jigswaw onto my new Facebook book group that I talked about last week! (Hint, you'll need to add the free Puzzlebee application to complete it though - but once you do, you can get some vital clues to the story...
- Lastly, this week, I’ve finally begun to research “Moon Crater Adventures” in more depth – ever wondered what a “Seal Your Own Fate” story could be? Well, that’s exactly what I’ve been brainstorming about so that I can get it just right when ‘Simulacrum’ debuts in the Autumn...

Books & writing I'm reading/looking at this week:
The Browning Version - I've been subtitling this film at work this week and it's the first time I've seen (read) it - it's fantastically poigniant and well acted. Makes me want to read the original play by Terence Rattigan...
Read It, Swap It - This is a cool forum that reviews books, I'd love to add a "Moon Crater" discussion forum to my main website sometime...
How To Be A Writer website - Stewart Ferris gives some good advice on developing the characters of your novel (you'll need Acrobat reader to download his free "Character Questionnaire" though!)

Next week: The aftermath of the final truth of the story has strange effects on all involved, particularly our fearless friends - but there's still 6 chapters to go till the end of the book, so where do they go from here? (I know, obviously - just trying to make a hooked ending so you'll come back and read some more next time!)


about writing writing and the Web