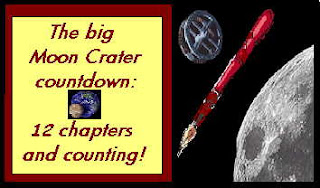 3 things that I've achieved this week with my writing:
*** I kept to my new writing routine and early "get-ups" (a small miracle, on past experience!)
*** I placed the present "state" of my tome in my mind (in relation to sending off to agents)
*** I gained greater control over my overall writing output and how it's presented to my "audience" (good but sad news)

A sentence from the newest chapter of "Moon Crater":
"All afternoon, Billy's thoughts were focused upon the peculiar events of the past four days. It was nearing the end of a long and eventful week, seven days he thought were going to be just like any other in his tired old village - boring..."

It's been a tough week maintaining the 6am wake-up calls from my phone alarm and actually not just switching it to snooze endlessly for an hour. In the past when I've tried this, I've fallen into that trap of just sleeping on. I think the key is this time partly because I know I've had to write how my week's gone on this blog but mainly because I've been sensible and actually got to sleep before 11pm the nights before. You might wonder why exactly an hour in the early morning is better than an hour or even more in the evening after work, but from my own personal situation I've learned that by the time I come in from a full day's work at night and have had tea and done other householdie things like washing up and chatting to my wife about the day, all I'm really good for is watching the TV (a favourite pastime of mine!) and if anything, reading back over whatever I've just written, rather than actually mentally focusing on getting down to writing itself. For me, I seem to be at my sharpest first thing in the morning and constantly at that bright hour I surprise myself with the creativity that flows from my brain into each chapter even though I think I know what's going to occur within each one before I begin.

This week I've also been getting my writing space sorted - clearing up my desktop on my laptop and also my literal desk top in our spare room/study at home. If you're going to be writing at an unearthly hour you might as well feel the most comfortable and relaxed you can while you're doing it, so having a tidy and well organised space around you, and being able to put your hands on particular writing aids like books, memory sticks and pencils quickly and without a huge search for them is paramount, it seems to me. I'm sure that by the end of the week, the desk will be littered once more with my scraps of notes and pads of paper etc, but at the beginning of each week I've made a promise to myself that I'll start again with a "clean slate" to work at...

The books I've been reading this week are on my "writing shelf" above my desk and are listed below. I've been scanning the literary landscape of the UK for suitable agents for "Moon Crater" (remember, this is a working title only - it WILL change later). What's come out of my reading of the various articles in those books below is a realisation that I'm definitely got a long winding path ahead of me to September before I send anything off - the general advice seems to be don't be tempted to shoot three unpolished chapters off in the post prematurely and not have the rest of the book finished in any form, because if you're lucky enough to get a reply, they'll want to see the finished story quicksmart and you'll look daft and have missed a real opportunity.

So this week it's been Chapter 12, then! First of all, it's a longer chapter than 11 (another writer once told me all chapters in a book should be roughly the same length, but I'm still not sure how I feel about this...) and there is definitely more happening in this chapter too. I've been working on three key scenes - the first a tense tea table tet-a-tet, the second is the "swap shop" of a certain souvenir that I mentioned at the end of last week's post and the last dark scene leads to a cliffhanger to hook the reader onto Chapter 13 (a crucial "discovery" chapter). Chapter 12 itself though is important because it's when all of the bubbling hints and clues and wonderings seem to froth over and our main characters begin to work things out for themselves... But this is only the beginning of things to come, so I'm really looking forward to starting work on subsequent chapters over the next month or so...

In my other writing news this week:
* I received a letter in the post from the Academy of Children's Writers informing me that my entry in their writing contest had not won but had finished in the top 15 per cent of entries (the top 300 of 2,000, I think) - I'm definitely happy with this result - so much so that I've posted the story I entered, The Strange Story of Stephen Cecil Smith up over at my Indie Fiction page for all to see and read...
* I've also updated my display pic in my blogger profile to fit in more with the overal mystery surrounding the Moon Crater story - But what's become of Gned the gnome, (from my old display pic, then? Well, he's off being a super sleuth - last I saw of him he was taking off his pointy hat, donning a deerstalker and pipe and calling himself the "Eagleyespy" whatever that means... Looks like he’s another agent gone dark, then, but something tells me, we won’t have seen the last of him...
* Last but not least, Twig has approached me with a serious face but a very friendly give-under bid (basically the exact opposite of a hostile takeover), saying that he'd like to relinquish design of my official site - he just needs time to concentrate more on his own writing, which is sad for me, but fair enough. It does mean I'll be learning how to web design (scary thought) from now until the handover and will officially announce it when it happens - I have to say a huge thanks to Twig for all his hard work and strivings with my main website - his real name CE Tonge is one to watch for in the future, by the way. So the penguins are being retired off to collect their arctic pensions and will drop us a line every now and then! It's a bit nervewracking "going it alone" so to speak but after exactly one year of collaborative design, it sort of seems like the natural next step...

What I'm reading/looking at this week:
The Creative Writing Coursebook - choc full of fantastic advice and step-by-step "rules" to writing a novel or short story or poem, plus with later chapters on getting your stuff ready to send off to publishers...
The Children's Writers & Artists Yearbook - a brilliant compendium of addresses of agents and publishers in the UK as well as interesting articles on age range fiction for younger readers...
A Guide To Writing Comics - this one's not actually a book (who says all you have to read all week is a book, anyway?!) but a blog by a comic strip writer - I'd love to write storylines for comics at some point!
Harry Potter Year 3 - I'm still nearing the close of HP3 - exciting stuff - can't wait for Year 4!


Next time... Chapter 13 - they say it's an unlucky number for some, and with Billy and Jo sort of down a rabbit hole, they're going to need all the luck they can get to find their way out...
about writing writing and the Web