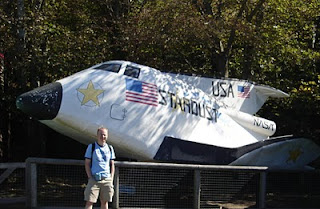 It’s high time I did a round-up post for my “great experiment” of 2010 which I began back in June and rocketed across 100 days of writing to its (semi)completion in November. I say “semi-completion” because standing now at the end of this grand endeavour, I have mixed feelings about how successful its actually been…


My idea was to finish a long-planned sci-fi novella that was a loose spin-off from my main “Moon Crater”TM first novel but at most, now th 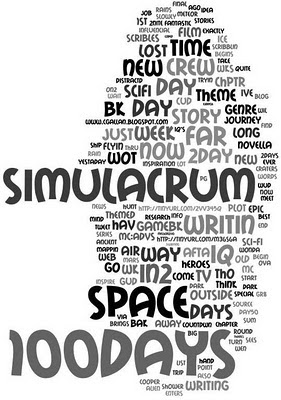 at I’ve reached Day 100, I’ve realistically only achieved a workable 1st draft of Simulacrum. But maybe I’m being too harsh on myself and putting too much pressure on “finishing” it once and for all simply because it’s been in the planning stages for a long while. The complication is that this was always going to be an ambitious project, since with Simulacrum I wanted to build an online gamebook like the old paper books from my childhood which gave you the options to “turn to page X or Y” and create your own unique adventure.

I’m ecstatic that I have achieved a 1st draft though, which will provide solid ground for the whole narrative (and 2 future sequel gamebooks which I’ve also planned in this “Seal Your Own Fate” series) – and I can now give my co-conspirator companion on this voyage, artist Rich Windass some definite scenes to illustrate – these involve an explosive space battle, some eerie ancient drawings on another planet and even a forest lost in space. So with future drafts, I’ll have the branches of the multiple pathways of this gamebook to develop and work on more, so time and space away from this particular story after the end of this 100 days of non-stop scri 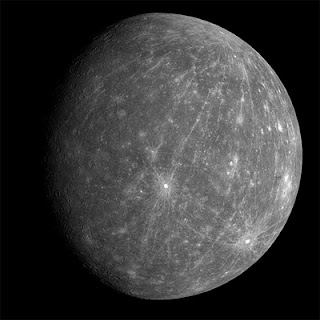 Recently, towards the end of the 100 Days write-up, I went along to a local venue that was staging the Doctor Who Exhibition (as a self-confessed sci-fi geek, I’m a big fan of the modern series, surprise-surprise!) and looking around the different costumes, designs and concepts by the makers, I was reminded of how dark and scary this “kids” series was – it was a welcome reminder, because as the writing of Simulacrum has evolved, I’ve realised it’s 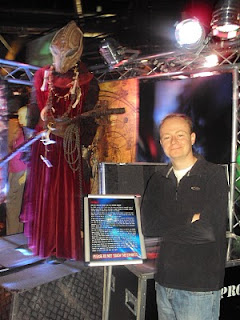 a little darker than I originally conceived (this is no Buck Rodgers, but it’s also not as dark as some of my other dark sci-fi either!) I guess, it’s an old adage but children can take more of a scare than we adults give them credit for – maybe it’s got to do with growing older and losing our thirst for wild-eyed imagination…

As I look back across the century of continuous days I took this year to write Simulacrum, I’ve also been re-examining my “Tweets” which I used to document each day’s progress, giving a small snippet and sneak peak every 24 hours of the working week as I continued on my journey into space writing… In fact, it’s become something of an obsession of mine to try to find a good “Twitter” search engine of late so that I could bring up a set of results that might show all my 100 Days Tweets in their entirety… “Tweetme” and “Topsy” are both obvious ones that spring to mind b 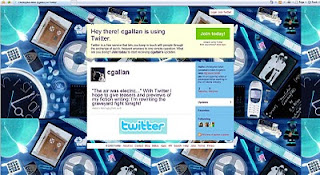 ut I still haven’t found a reliable one that can allow me to properly search my tweets within a string of defined dates… It’s for this reason that I eventually turned to my old friend “Wordle” to find a way to show ALL of my 100 days Tweets in one little package (or as it turns out, 2!) – for the uninitiated, Wordle is a graphic art engine that allows you to paste in any length of text and it will generate a nice-looking picture for you. Thus, the two wordy pictures scattered about this post, showing the key-words from my 100 days Tweets – a nice way to round off this expedition into the weird and wonderful world of words… 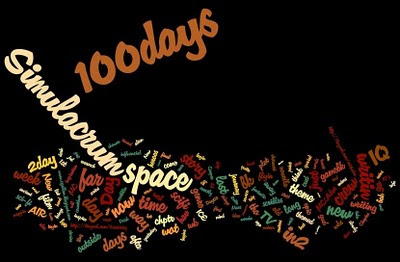 Now, if you’ve happened to have followed the progress of this 100 Days since my first post on the subject back in June, you might be wondering where the “exclusive extract” of the finished story that I promised by Day 100 is… Well, wonder no more, space cadets, because to sign off this post and to finish off my now-traitional November updates on how the "Moon Crater: Adventures" are coming along, I'm giving you a glimpse at how the opening page of the 1st book of my "Seal Your Own Fate" series will eventually begin... (And after 3 years adventuring across the blank page, scribbling notes on this particular story, I think it’s all I have to say about this writing project for now… until it launches sometime in the future…)

(for ranking Pioneer Patrol EYES ONLY) 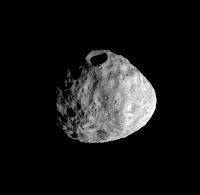 Before you begin, you will need to visit


to purchase the following items


- all expenditure will be refunded


on your safe return to the Home Planet…

N.B. Compulsory pieces of equipment are marked with an asterix
DO NOT leave planet orbit without these
or suffer sealing your own fate
before your adventure has even begun!


©CGAllan 2010
p.s. - you can keep up to date with future developments of all 3 books in the "Seal Your Own Fate" series by checking back on this blog's lefthand sidebar in the 'tags' section under "Moon Crater: Adventures" AND also by keeping my Official Writing Website bookmarked and regulary keeping an eagle-eye on a 'suitably spacey object' on the desk picture there...
about writing New Stories sci-fi writing and the Web