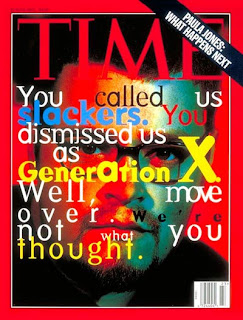 For most of this year I’ve not really found time to do the kind of “feature posts” about subjects relating to creative writing that I have enjoyed writing on this blog in past years, so I thought I’d round off 2009 with a pondering sort of ramble on my own creative scribbles as I become that bit more pensive with winter taking hold both in the outside world, and the inner workings of my modular mind…

Early next year, I turn 33, and it’s a strange feeling approaching that age (even worse than when I turned 30) and it’s perhaps for this reason that I’ve recently been wondering which “generation” I fit into, and following on from that, in relation to my scribbles, which the audience I’m writing for fits into as well… After some research (mainly through Wiki!) I appear to have been born at the intersection of Generation X and Generation Y.... (I wonder what sort of graph arc my lifeline’d make!), but it’s actually Generation Z that I’m writing for as a “kids” audience of 8-14 year olds who are internet savvy, text at lightening speeds and can solve PC crashes in their sleep (the mystical “iGen” as they’re also known)....


As a writer for that proposed readership, it’s always comforting to find that you are actually on the same wavelength as some of them at least, in both your approach and mindset. Recently this very thing happened to me when on our local light-rail system in Newcastle a set of urban 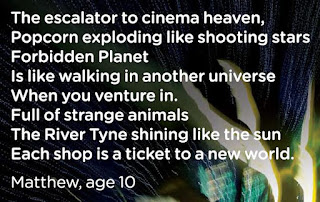 poems were displayed as part of a local young people’s creative writing initiative called the “Juice Festival”. All of these poems were full of imagery and imagination that reflect their youthful authors but one in particular struck a chord with me because it’s pretty much how I’d have gone about writing a poem about “the Toon” (which was the original Juice Festival brief) Anyway, reproduced here (for non-profit - all copyright remains with Matthew, aged 10!) is my favourite of the brilliant young word-smiths' work, proving that the future generation of literature and imagination, at least, is in good hands...

Having considered all this crazy generation back and forth, I can’t help but wonder, "What’s next?" Will we see a return all the way back to the “A” tag for the next generationi?! (Certainly Douglas Coupland seems to think so!) Incidentally, as a final aside on this whole ponderance, I do like the notion of there being a real (not-so-mythical) Lost Generation too, and I have even posted here on my online journal about how imagination can reach across the generations in the past as well… 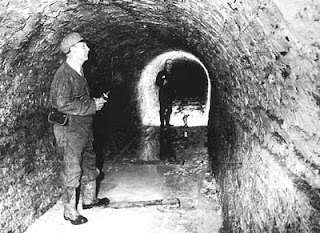 new one, I recently got the chance to make a unique journey into the past by taking a trip down into the old Victoria Tunnel which runs under my hometown of Newcastle upon Tyne. It's been an experience I've wanted to have for a good few years so I was really excited when I found out that I'd finally had the opportunity to venture down beneath the streets of the Toon...

Originally built as a transportation tunnel to shift coal from the mine at Spittal Tongues, the Tunnel has gone through a few changes, working as a huge air raid shelter during World War II and today, after much delays due to health & safety recommendations, being opened as a tourist attraction.

Going down through the tunnel and seeing the old Victorian stonework and pre-20th century engineering was a brilliant insight for myself, a scribbler who firmly believes that "history matters" and who also has visions for the future of writing a novel (or novels) set in the past of this grand city of Newcastle. You're given hard hats and torches to find your way around the tour, but on the backward journey, walking quite a way between the group in front of me and the stragglers behind, I turned my torch off and soak 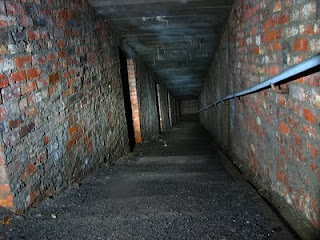 ed in the atmosphere of walking down the old tunnel in pretty much complete darkness, as the original miners would have had to work on occasion. Being a writer is a lot of the time mainly about imagination and creating something from nothing, but you really can't beat experiencing first hand (when it's safe and sensible to do so, of course!) how it might have felt, looked like, smelled and sounded for your fictional characters (of perhaps another "lost" generation), so this kind of first-hand research was a brilliant field trip to have been able to take part in.

So, as you can tell, with my own writing, I’m now looking forward AND back, and while 2010 will bring my futuristic space odyssey “Moon Crater Adventures” into the forefront (click on a suitably “spacey-looking object across at my Official Homepage for more!) , I’ll also be going into research and development on my second (some say “the most difficult”) novel, which is already begun, but I hope to concentrate more on the writing of, in 2010 as well (and likely complete by 2011) - all I can say for now is that it’s going to be my “history mystery” and it all begins with a series of inspirational pictures that I’ve laid out as a sneak preview below (if anyone can name whereabouts they come from in Newcastle, by means of leaving a comment on this post, I’ll send you an "exclusive preview" of what that 2nd story is about…) Anyway, that's about it for 2009, folks - Happy Holidays, Merry Christmas and a prosperous New Year to all readers, and I hope you'll keep coming back to read my scribbles in 2010... 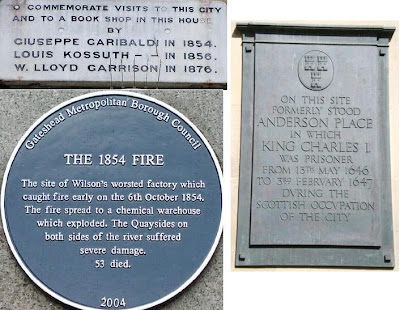