I've been looking forward to October for the past five months - to a nice and relaxing time, with space to breathe after my "Big Write-Up” of the novel was done... And now it's here, it also means I've got time now to post a decent report on my experience being interviewed by a local theatre about my writing which took place in June this year…


It was back in May when I originally decided to fill in an “audience participation” questionnaire online for the Live Theatre which was undergoing extensive refurbishment and due to open by the Autumn. I didn’t think much to it after submitting my answers on their website about my memories of attending the Live in the past, (but made sure, as usual that I linked to my main webpage for the free advertising!) and then in June, as I reported in the News Section of one of my posts I got a phone call out of the blue asking me if I’d be available to come down to the theatre which was still being overhauled to chat to one of their interviewers so that I could appear on their site (I think the angle of me saying I was a writer might have helped in the selection process!)

I arranged to go down a few weeks later, taking a sunny Monday afternoon off work, and entered the scaffolded old building (which in part actually dates back to the 16th century!) – on being greeted by the interviewer who was up from London and one of the assistant staffers from the Live, I was handed a nice yellow hard-hat because the interview and photos were to be undertaken inside the half re-built theatre itself and EU safety regulations demanded these attractive pieces of vogue fashion were to be worn at all times on the premises. (knew I shouldn’t have bothered getting my hair cut specially for the occasion!) It’s quite difficult getting used to wearing a hard hat, chatting AND being photographed all at the same time, whilst also not trying to look like I know I’m being snapped at... (hence the slightly comic photo of me that ended up on my page of the Live audience website which you can see lower down this post – I now realise how much I talk with my hands too, plus, you can just make out the fetching yellow hat adorning on my skull there too!)

Anyway, once I’d been given a short tour of the development going on at the theatre, we sat down in one of the conference rooms on the first floor and with the posh iPod-style recorder of the interviewer blinking at me from the table, the chat began...

We talked for a good 20 minutes and the idea being that eventually along with one of the photos the interviewer had taken, I’d be given a short “soundbite” taken from my interview recording that would stream on my page of the Live audience site when it was all loaded up. I was asked first to recap on my experience of coming to the theatre as an audience member in the past and talked about seeing Rodney Bewes of The Likely Lads fame in a one-man show of The Diary Of A Nobody back in 2000. 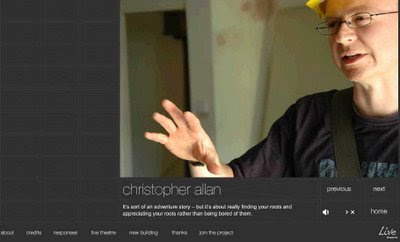 I also talked a lot about my writing, how I got into it and especially about Moon Crater, but I suppose because it was only "soundbites" they were after, most of what I said didn't end up on my page on the site... I have to admit I did try to be cryptic (as ever) with how I described my book but also when put on the spot about it I summed it up in a way I've never really described before - my quote is on the main page linked to below and also in the transcription underneath that link - but "roots" is essentially what the story boils down to - a belief that the history of the people and places around you matters...

Another thing we chatted about was my "day job" as a subtitler for TV and they were pretty interested in how this relates to my hobby of writing creatively (so much so that it's that audio that they used for me on my particular page of the site, rather than the more interesting (from my perspective at least!) Moon Crater stuff... Suffice to say, as well as similarities there's also sharp contrasts in my day job to my hobby... For instance as a subtitler, by day, I'm recreating other people's speech, whereas after work ours, by night, I'm putting down my own thoughts and original words on paper... But the strengths of doing this job is that I get to see how a lot of drama is played out in the TV arena on screen (now there's a hint for you if ever there was one!) and of course, my grammar and use of written English has vastly been honed since starting work as a subtitler - always useful when it comes to the all-important proof-reading of my manuscript and letters to publishing editors/agents... (I'll be writing a longer post on my actual day job in the new year and how it definitely does help my creative spirit, so stay tuned for that on this blog - incidentally I've blogged once before in more detail about life as a subtitler, so head here now to read that if you care to...)

Overall, the experience being interviewed about my writing was a good one (although specifically it was more about being a theatre-goer at the Live...) One big thing which I wasn't so keen on from the finished page I appeared on was the "squeaky voice" I seemed to have – I know, I know, everyone hates hearing themselves played back - but I've taken this seriously and to heart and in 2008 I've resolved to deal with this because as a writer I just need to have a clear speaking/reading voice for public readings etc... (anyway, I digress... More on this in my New Year Review/Preview in January!) Ultimately, though the interview was really good exposure for me as lots of other people saw it (it was just unfortunate that they couldn't advertise my writing site with a link to bring more people to see my words) - anyway I enjoyed it and some other people did too - here's what they said after seeing/listening to my page on the site:

“Rock on Chris, good commentary, and in the picture you look like you are having a disagreement with someone off shot. What’s with the dozzer yellow hard hat?" - The Big O.
“Good on yer with the Live Theatre!” – RV

"Hey, that’s a cool site... Nice little snippet of yourself and a good photo too. I like the hard hat btw! That initial page with all the thumbnails was mad! All those voices goin on repeatedly – I thought I was gonna go insane until I found your pic!” – The Boatman

And the final words should go to the Live itself for allowing me the chance to "speak" and be included in this unique audience experiment:

“Thank you for being a part of the project, it was really nice to meet you... I will pass (your website) link around the staff here at Live so they can have a look, as... I am sure they will be interested.”

on the lefthand column!)
***NB - this Live Theatre mini-site
is no longer available on the Net
but the transcript of my interview
is still below!*** 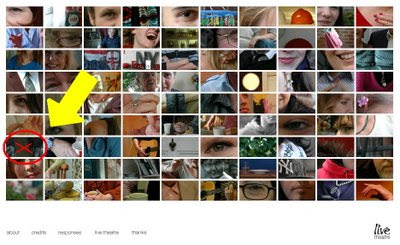 postscript: As inevitably will happen, the main Live audience site will probably be taken down so I’m reproducing the pictures from the site on this post as well as a transcript of my “soundbites” on the audio there, starting with my caption quote from underneath my photo:

"It’s sort of an adventure story – but it’s about really finding your roots and appreciating your roots rather than being bored of them."

And here's the transcription of my speech that appeared as an audio stream on the site:

“When I first finished university the first time, I was just working as a temp in a job and I wanted to originally be a journalist before I came round to creative writing. I liked working in news journalism and had written a lot of things since school and then through university. But then I saw this job advertised and thought, ‘It’s a media company, it’s a way in”. But then I applied for an MA in Journalism while I was working, about two or three years after starting the subtitling job, but the funding for the course fell through, it was European funding, ESF, so I couldn’t do the course because I couldn’t afford it, really - to take on the course fees and living costs as well. So I actually came to a stop. I still had the job but I saw the Northumbria University MA course for Creative Writing advertised and thought, “I’ve been writing short stories for a while, should I give it a go?” and since then I’ve realised it’s really creative writing that I want to do rather than the news reporting. I’ve still got a scrapbook of my cuttings and things…”
about writing day jobs New Stories