- September 15, 2006
I was going to do a long self-congratulatory blog to round off the week this afternoon over some prizes which I've finally received from a writing competition I placed in a while ago, but I'll save that for some other time, because I've had a humbling experience for ten short minutes today which I just have to share with you all...

I don't think I've ever said on the blog what my "day job" is but when I'm not trying to be a children's writer, I'm a Broadcast Subtitler, working for a media company, helping create captions for the hearing impaired. If you live in the UK and ever switch on your digital subtitles or page 888 on teletext/ceefax, that's the stuff I currently do for a living...


A TV show I was doing for Five today is a short children's film called "What Makes Me Happy", and I was blown away by it. A lot of days I complain no end about having to subtitle Trisha or CSI but this is one of those TV programmes that makes me glad I'm in this job.

The episode was called "Tommy's Story" and is about a boy of about 7 or 8 chasing after a car which carries away the girl he likes as her family moves house. What makes this special to me is that it's filmed on a rundown estate that's coincidentally very close to where I grew up. The film was done in such a beautiful way, almost like a silent film, and even though it mixes up the geography of the area a bit, it was amazing to see such fresh and quality storytelling in a setting which as a kid I always thought of as a "no-go" area (and sort of still do as an adult).

The sentiment of the story reminded me a bit of the writing of another Geordie children's writer, David Almond (highly recommended, by the way), but the end credits of the film stated that two poets were the writers, and they may be worth looking up - their names are Wendy Cope and Kit Wright. The film was made by The Ragdoll Foundation for the Save The Children Fund and is definitely worth watching if you are in the UK and have access to Channel 5.

Well, I just wanted to write a short post to let you know about it, so there you have it... It's on this Sunday morning (September 17th), 9:30am, on Five. Remember it's called "What Makes Me Happy" - and this programme certainly made this weary subtitler happy at the end of a long week. 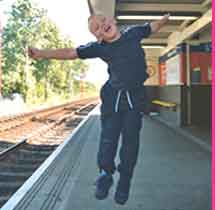 (As a sort of footnote, if you can turn on your subtitles on Sunday morning for that short film, keep and eagle eye out at the end and you should be able to see my name flash up! Well, what do you know, somehow the narcissist in me DID turn this post around to being self-congratulatory after all! Oops! Sorry, guys...)
about writing day jobs on other writers