- July 11, 2007
# "A lot... goes... on... A lot... goes... on, but nothing happens!" # - Ben Lee
The grand plan: to finish the novel I've been working on for about 8 years over a period of 5 months! All of the planning, plotting and preparation is over, it's time to just get down and write the blighter! Hopefully along the way I’ll be able to pass on some tips for other first-time writers as I discover them myself! So with a working title of Moon Crater, this is my week-to-week experience of its creation to complete-draft stage... Chris G. Allan (May to Sept ‘07) 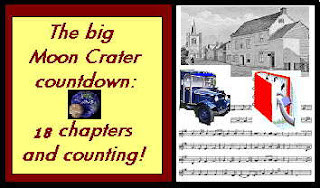 3 things that I've achieved this week with my writing:
* I've discovered that half an hour is just as good as an hour first thing in the morning for writing...
* I've hopefully found a way to "advertise" the book more on the internet...
* I've injected more emotional punch into the newest chapter than I'd originally envisaged...

Sample sentence from the new "Moon Crater" chapter:
Billy began to sing just like everyone else in the place, but as the words echoed all around him, he looked down at them on the sheet - he'd seen them before, not like this, but it was unmistakably the same text...


It’s been a long seven days or so in my writing world – on the whole I’ve found it easier week to make the early starts I’ve imposed on myself before work but also found that 6:30am (just half an hour of writing first-thing) is good enough to produce some writing which I’m pretty impressed with... I’ve also been busy this week, because for the past couple of summers I’ve taken on a seasonly job of marking Creative Writing exam papers and the first batch for Summer 2007 landed on my doorstep this week... This is hard-going but really rewarding when I do them because they’re exams for 8-to-12-year-olds which is the audience I’m aiming for with Moon Crater – therefore, I see it as brilliant research and an education in itself to be able to see how the mind of that age group works when they tell a story themselves...

I’ve also made a few more strides this week in advertising Moon Crater a bit more on the net – ever heard of Facebook? I was dubious at first cos I’ve never been a fan of MySpace or other social networking sites, simply because I didn't see how a writer could make use of them creatively (musicians, obviously get a great deal of publicity from them!), but a few months ago I was talking to a friend who suggested a “Facebook group” for my book and so an amateur “marketing” idea grew from there and the "Moon Crater – the book what I wrote (or am writing)" group was born. This past week, I’ve set in motion the second “discussion” on the group and am getting some positive feedback (I’ll also be releasing more exclusive clues to the story on there in puzzling ways very soon...) – remember, you’ll need to join Facebook (which is free!) to become a member of my "Moon Crater" group itself and I think they have an age restriction of 13 and above to join - but never fear, younger readers! All clues on my Facebook group will eventually appear through the radio icon on my main homepage once the "Find The Missing Reel" mission begins proper later this year - so you won't miss out!

Onto our main item on the agenda this week - Chapter 18 – and it’s been a bit of a dreary chunk of the story to write in more ways than one. A recent death is looming over everyone in Billy and Jo’s village, and I’ve also been trying to fit in a pivotal plot point which I'm not all together convinced works all that well, so the writing has been both difficult and a challenge... Despite the planning page in my plotting bible being quite short for this one, the chapter itself in the writing has proved to be quite a long one and this is not least because an emotional Billy is having his nerve tested in more ways than one and his frustration is building to what will be an Earth-shattering climax in Chapter 19...

This emotional punch which I’ve discovered in Chapter 18 reminds me of a writing exercise our class did on my MA course a few years ago. It proved to be a really useful one too. At the time, I was working on a different novel (an historical one, in fact) and our tutor handed out a sheet with a list of dozens of emotions. She told us to pick one which we wouldn’t have ever associated with our main character and write a paragraph where they act out that emotion. It was fantastic for me to see the hero of that book acting in totally the opposite way to which I’d have envisaged (and that scene will make it into that future book, when it’s finally written!) – and so too with Billy, this week, in Chapter 18, because of the external forces at work around him, and a chain of events that he feels is out of control, he displays odd emotions which are sort of “out of character” but healthy all the same for both himself and the story for the direction they’re both headed in...

No "Moon Crater" news this week other than:
Stern face time again this week as I cancel all other news to report on the fears I had of a few weeks back of the Time Warp hacking into my official website! Well, it's happened and I can't actually do anything about it cos Twig, my official site designer and all-round tech-expert is still AWOL in the Artctic Circle trying to return his penguin workers to their natural habitat (and he's going round in circles in the snow blizzards, last we heard). There's four actual hacked pages now on my homepage and that video of my writing study is also linked to the page... Without any way to actually combat this for now, I've issued wanted posters on the sidebar to this blog, appealing for information on this elusive organisation known as "Time Warp Initiative". The other thing is that I'm loathed to say is I've got no choice but to give in to demands on this hacked page from the TWI for more Moon Crater information in exchange for clues to where my brain paperweight has gone since it was taken from my study - I've got to negotiate with the Initiative over the coming weeks, so I'll let you know of Brainy's progress as I find out myself...

Books/writing I'm reading/looking at this week:
Harry Potter Year 4 - I'm about halfway through now (despite going to see Harry Potter 5 at the cinema this weekend - oh, well, maybe by the time the 6th film comes out, I'll have read that book first!)
The Square Metre Project - this is not strictly a book link but it's sort of journal writing and perhaps a way to gain inspiration - heard about this idea on the BBC's Springwatch a few week's ago...
"Writing Children's Fiction" - possibly out of print now (cos it's from 1982!) but some really useful advice if your local library can order it in for you...

Next week: "The truth will out" as they say, but when our two naive friends discover the real "Moon Crater" mystery in Chapter 19, it turns their world literally upside down and spinning into oblivion...