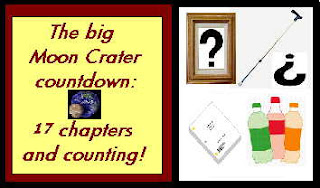 3 things that I've achieved this week with my writing:
* I've beat a growing bout of writer's block brought on by lack of sleep!
* I've realised I can produce good work at other times of the day than 6am!
* I've potentially found a local children's writers group to attend!

A sentence from the newest chapter of "Moon Crater":
Billy looked at Jo who was staring wildly back at him. Inside his chest he felt an uncontrollable urge to… burp. And then he did...


This past week or so it's been a real battle between sleep and writing and I'm afraid sleep has sort of won out on the whole. It's also been a personal struggle this week dealing with the fact that due to the much-needed sleep my body's needed, I've literally not got up at 6am even for one day for my writing... But as I write this post I'm happy to report that I'm still an advocate of this "early bird" routine and am determined to get back into it with work on Chapter 18 - I just feel I'm that bit more creative and sharper at an earlier hour, than a late one... That all said, though, I've managed to scrape some time here and there at other times of day to produce a draft of Chapter 17, which I'm pretty pleased with...
One reason I'm happy with this chapter is because a character who only first really, physically appears in Chapter 17 has suddenly changed her position in the pivotal family of the book, and this is a direct result of the story of Moon Crater evolving as I write it (one of the exciting aspects of a developing story!). This has a lot to do with the timeline inconsistencies I was talking about in last week's post... This aspect of writing - a story taking on a life of its own - will be forever appealing to me during my writing life, because like any good mystery story, you never know what will happen next. This kind of thing has happened before with Moon Crater - at the very beginning of my planning of this story (about ten years ago) I originally saw it as an adventure between two boys, but quite quickly I realised that the story had a wider appeal and so one of the kid heroes had to be changed into a girl - and quite literally "Joe" dropped an "e" from his name and became "Jo", and she's enjoyed the experience ever since!
I also said last week I'd talk about pens in this post - this is because I never actually use pencils to write with (I'm always worried in years to come that I'll return to a notebook and find the pencil marks faded and illegible) or for that matter a fountain pen (for the same reason as the pencil fading, although I own a couple of fountain pens still for posterity!). My weapon of choice is actually the humble Biro. Blue if possible (red if I'm proof reading, of course) and the pen itself can't be one of these cheap, nasty and scratchy ones. This is simply for practicality's sake - if I have an idea or burst of ideas I need to get down quickly, it's so much harder to write with a thin, scratchy Biro than with a nice soft one which lets the ink flow from it and your ideas spill from your mind more freely. OK, 'nuff said, apart from my tip if you want to be a writer - ALWAYS carry a pen (a notebook too but there's always scraps of paper lying around anywhere to use) - there's not always a pen readily available - oh, and make sure it has a lid top so that it doesn't leak in your pocket too!
I seem to have said a lot this week even though I started out by saying I've felt like I've been experiencing a bit of writer's block of late. But what I want to say to round off this post is that I think part of the reason I'm finding it hard-going with the first draft of many of these chapters, (even though I've planned them down to what happens in each paragraph in some instances) is that it's becoming obvious that it's the last two or three pages of each chapter which hold the essence of what I want to achieve with each one. Another writer once told me when I was setting out on developing my writing plan from my initial story treatment that I shoud "pick a scene" to mould each chapter around, and that's what I did and I think that works well. The resulting downturn from that though is that because I want to use "hooks" to make readers continue into the next chapter, the pivotal scene of each chapter tends to appear at the end - this doesn't mean, however, that the rest of the chapter is just padding though - ALL and everything I've planned is necessary narrative as I see it now (maybe in the 2nd draft I'll change things around more) - I suppose for now I'll just go with this flow and see how the finished product looks come October...

In other "Moon Crater" news this week:
- A "first look" preliminary artwork for "Moon Crater Adventures" is now up across at that preview page - there'll be more as the months go on advancing towards the story's launch some time in the Autumn, but I've also added some other teasers in that page's sidebar as well to whet the appetite...
- There's been a little disruption to my official website access of late - nothing serious, just odd syntax error messages and "page loading" displays staying up for ages - anyway, I hope it hasn't been annoying to anyone and I also hope it's not got anything to do with the Time Warp hackers I talked about in a few recent blog posts...
- You may have noticed that I've added a link to the singer I've quoted at the head of this post - I'm going to start doing this every time I reference a song with the lyrics from songs I like... "How is this Moon Crater news?" you may ask - well, trust me, music is VERY relevant to the story, and if you don't believe me, read an old post of mine from this blog on music in my writing here...

Books & writing I'm reading or looking at this week:
The Ruins of Dantooine - I'm really enjoying this tie-in book of the Star Wars universe and it's great research for me too...
"Journey to the Hidden Kingdoms" - a survey of children's books set in Northumberland - brilliant history and descriptions given by Jim MacKenzie...
"Seven Stories Writing Group - the potential adult writers group for children local to me which I'm hoping to find out how to join soon...

Next time:
It's a race against time for our perilous pair as they realise they're late, their late for a very important date...