# “What a beautiful day... I'm the king of all time... and nothing is impossible in my all powerful mind” # – The Levellers 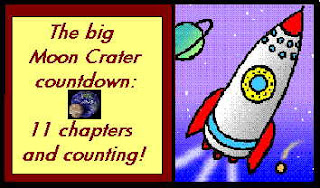 3 things that I've achieved this week with my writing:
*** A brand new chapter is complete...
*** I've resolved a niggling plot point regarding a runaway wheelie thing...
*** I've set in motion a new, regular writing routine for myself...

A sentence from the newest chapter of "Moon Crater":
"I know that thing's older than the Freezer but we'll still never beat it on foot!" said Jo. "Hey,... we've got our own transport right here, though - look!"


So this is my first blog post of my new my "5-month plan" writing routine. The status of my novel presently stands at 11 chapters completed in 1st draft format (the 11th was just completed this very morning at an ungodly hour!) I work full-time so have to fit my writing around my working hours - having tried out various times to write in the day, the best one I know of at the moment is also unfortunately the most tiring way I've found to do this. I get up an hour earlier than I normally would for work and write as much as I can for those 60 minutes. This isn’t actually as bad as it might sound - it’s generally light at 6am at this time of year and the view out of my window this morning was lovely and misty - just right to create an eerie atmosphere to write in… Once you wake up properly (normally after about 15 mins of intense yawning I find!) you can actually get a lot done in the quiet…

As I've indicated, I’m not starting this mammoth write-a-thon from scratch - I already had the first 10 chapters behind me but those were written at various times in the past three years, and I'd actually forgotten until beginning again on Chapter 11 this past week how much I hate writing first drafts. Everything seems so clumsily constructed and flimsily held together. But going from a blank page to 13 or so pages of a complete chapter full of the ideas you've had rolling round in your noggin' for what seems like an eternity can't sound all bad, can it?

My main aim from now until September is to get a complete manuscript produced and THEN, and only then will I go back and redraft each chapter. For a good while now I've been nitpicking at various bits of those first 10 chapters and it's not really gotten me anywhere (apart from sort of getting a clearer picture of where the story is headed of course, I suppose...)

So as I said, I work full time and it may sound odd that a job which takes up most of your waking hours could “help” writing, but apart from financial security in the real world, I'm fortunate enough not to take work home with me, and I do moan about the job itself a lot - but it’s that moaning that’s needed I think - it's my “artist’s pain” - in that if I didn’t have that to “work against”, to use my writing to escape from, I wonder, from experience of having the free time and not using it, if I just wouldn’t write as much as I do at present... It’s an odd sort of fuzzy logic but hopefully this resonates with someone reading this out there...

Anyway, back to this past week and Chapter 11 - it's a sort of "something and nothing" chapter in that there's a good bit of action to keep the story moving along and with Chapter 10 it reveals something pivotal about two mysterious characters but I always knew planning and plotting the story that this was going to be one of the "shorter" chapters of the book. I've also realised since making the decision to write-straight-through to September and not go back fiddling with earlier chapters that I need to keep a "continuity notebook" as I'm changing things that occur to me as I go along that should have been laid out earlier (and will need to be done later) - I hate films and TV series which show a severe lack of disregard for continuity so I'm going to work really hard later in the year during the redrafting process to tidy all these points up.

In other "Moon Crater" news...
* I've extended the 2nd Moon Crater Fiction Poll so that it stays open to the end of the summer… Look out for a link to it on one of the more "sketchy" desk objects on official home page soon!
* I've added a minecart load of new "people like me" links to the bottom of this writing journal blog - the idea all through this 5-month "write-up" is to help fellow aspiring authors - so scroll down the page and you'll see my new and improved favourite links lists now...
* The Puzzle Page "waiting room" is now up and running - read all about it through that link and the Boggle object on my homepage and then you'll know why there's "key words" being given at the end of this and all the following posts up until September!

Books I'm looking at/reading this week:Wormwood by JP Taylor - a decent follow-up the brilliant Shadowmancer but it's taking me ages to finish the last few chapters for some reason...
Harry Potter "Year 3" by JK Rowling - I've never read the HP books before and am trying to get up to the end of Bk6 by the time the 7th comes out in July - just to get caught up in all the anticipation for once...
Star Wars Empire: Vol 7 - I've always been a comic geek and graphic novels are by far the way I prefer to read a complete story - I've just discovered these Star Wars trade paperbacks and Dark Horse has done a fine job of them!
Writing For Children - various authors - this is one of the many creative writing textbooks that rest on my writing shelf at home - I'll give more as the weeks trundle on but this one has some great articles and a list of all UK publishers of children's fiction

Next week... Chapter 12 beckons and Billy and Jo find that they need to get rid of a certain souvenir sooner than they realised! And I'll also have some general ramblings about creating a comfortable writing space as well as the significance of a good chapter title... Phew! I'd better get writing, then, if I want to keep on schedule...
Email Post
Labels: about writing writing and the Web