Things they lost in the garden... 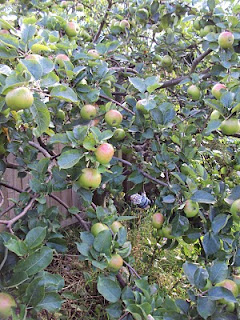 We’ve started the grim task of closing up our garden for the autumn in recent weeks, clearing out our summer vegetable plots, cutting the grass for (hopefully!) the last time in the year and collecting in the last of the apples from our fantastic bramley tree which we inherited from the previous owners of the house.

I say it’s a “grim” task because when we finally admit summer is over and we begin to spend less time in our garden, it’s a sad time. We’re lucky to currently have a garden that’s about 26 metres long, so lots of space, and it’s a place we’ve found blossoming enjoyment in over the short five years we’ve grown from Gardener’s World novices to wannabe green-fingered experts, ready to bore any party into The Good Life oblivion with our talk of the best places to planet Nisterchions to the many varieties of cabbage and when is the best time of year to plant each one...


One of my inspirations as a writer is watching wildlife and our garden is the perfect place, even in autumn to sit quietly and watch with a jottings book in hand and note down various ideas thrown up by the multi-spectrum of animal and insect life on display… From a resident mouse AND a tiny wren who both seem to live in 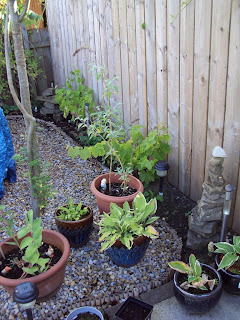 harmony in our rockery, to the noisy family of magpies in a neighbour’s tree, and the odd frog happily hibernating in our leftover growbag sacks (there isn’t a pond in the immediate vicinity as far as we know!), to the ragtag group of urban foxes that have wandered up and down our stepping-stone path and around and all over our cafefully laid-out vegetable plots, there’s never a dull day in our garden – even in winter.

We’ve got into composting ourselves (a fruitful exercise when you’re vegetarians and most of your food waste in the year is from vegetable peelings!) and have begun keeping a leaf-mould bin, planned an as yet unrealised water butt system from our house guttering, and even created some “wild spaces” in the garden – leaving logs, rocks and wild flowers to grow on their own, without any cultivation, so that insect life can thrive untouched but always observed, if the need so arises (which often does for a curious fiction scribbler!)

But even despite all of these amazing things that we’ve witnessed in our garden over the past half-decade, the most profound things that we’ve literally dug up are a curious collection of 'un-earthly' objects - and these are actually my main reason for writing this post… We’ve moved a lot of dirt and rubble around our garden, lifted turf and laid down paving stones and gravel in the five years we’ve been in our house and across that time I've carefully picked up these curious objects and kept them secret, kept them safe, and while they're by no means cause for me to make claims of treasure trove or for me to contact Channel 4's Time Team, each one has made me wonder as to the history of our garden and the lives of the people who've inhabited our house before us. The interesting artefacts in question are... (and sincce I'm a wide-eyed writerly-type, my crazy, imaginary flights of fancy as to their origins are in brackets after each one!) 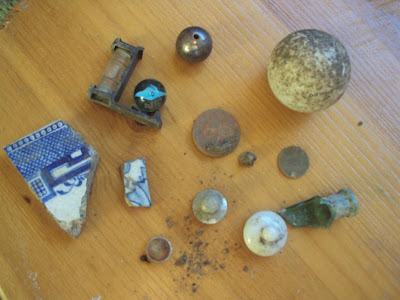 You can see from the bracketed comments above how my imagination does get the better of me sometimes but I've put them in to show how everyday objects inspire me to think up fiction and new stories. Still think I'm a bit crazy? How about you have a go yourself? I remember an exercise from the MA in Creative Writing that I studied on, five years ago, coincidentally, just before I had my own garden, where we were asked to pick an object, any object from the shelves around our desk, or even a made-up one from our imagination and create a backstory, life and adventure for that object to go on… 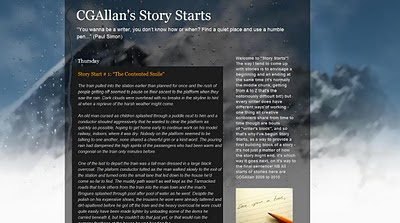 So now it's over to you - why not use one or all of the garden objects listed above to write your own tall tale? AND, if like me you're someone who sometimes finds it difficult to begin a new story but still have the creatve urge to get writing, you could also get scribbling with CGAllan's "Story Starts"! The page has been running for about a year now and has recently received a bit of a makeover, so if you're interested, go back to my Official Writing Homepage and look for an important-coloured object to click on that could be used to keep your scribbled story notes together - once you're on the Story Starts page, you'll be able to pick up on one of the two stories that I've begun there... And coming soon there will be a third story entitled "Visitor 31" - who is Visitor 31 and why have they arrived at a mysterious mountaintop hotel? Soon, YOU will be able to decide with CGAllan's "Story Starts"!
about writing history memories New Stories on other writers