I thought I’d begin this very first post in my new “2010 - odyssey in space” Seal Your Own Fate series of posts with a clip of the song I’m quoting lyrics from (above) with the actual audio to the tune as well. I often write with music in the background, and this is just one of the finest sci-fi tunes I’ve heard recently, so thought I’d provide it here (for non-profit!) for readers to perhaps play in the background as they peruse through this post…

Anyway, MY ‘plan’ for the first novella ‘Simulacrum’ of “Moon Crater: Adventures” (envisioned as an online gamebook series, using a blog engine) has now taken full form after having brewed in my head for around 3 years now (hmm, “3”: a magic number, perhaps?!). Back in November ’09, I reported how I’d decided with the dawn of 2010 that it would be the year to write out this first Adventure properly…

So in the past few weeks I’ve been settling down to the first important tasks of that writing (for me), and those are namely the plotting (figuring out the events I want to happen) as well as the practical mechanics of how this kind of prose scribbling (the lengths and number of the chapters, the style etc.) and, crucially, how and at which points I’ll b

ranch off the various meandering paths of these ”interactive fiction” Adventures… It’s the first time I’ve attempted to write one of these twisting, turning “decide you own destiny” sort of stories so I’ve decided to approach it by using my original plot outline to write “straight”/linear chapters and then I’ll tackle the challenge of making it a “branching story” by looking for “hooks” and possible divergent paths at crucial points, perhaps allowing for a handful each chapter…

Chapters 1, 2 and 3 of “Simulacrum” are important for setting the tone, place, and time of the story, as well as introducing some but not all of the main characters… so I’m enjoying layering these first parts of the book with the mystery story of who “YOU” are, allowing the reader to discover more about themselves, as they explore the world they wake into… 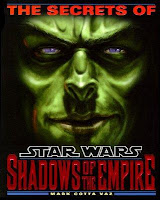 that was launched in the 90s called “Shadows of the Empire” and I’m quite influenced by this kind of storytelling for how I’d like to approach the overall creation of the “Moon Crater: Adventures”… But how could I achieve this when I’m not in charge of a billion-dollar franchise like George Lucas? Well, it’ll be in more basic and simple terms obviously but hopefully the same creative passion and spirit will drive the project along! And the most important aspect of this creative zeal on the Adventures is my partnership on the project with illustrator Rich Windass who I meet with regularly to exchange ideas. He’s come up with some great creations on his sketch pad so far, inspired by my initial words on the page and will be creating the graphic prelude “At The Time When Time Collapsed” to Adventure #1, as well as picking key moments in the stories to illustrate throughout… As I’ve said before, I’ve also got ideas for a video “trailer” to the Adventures, and who knows, perhaps an audio extract from the ship’s log might be found somewhere later this year…

During a recent meeting with Rich, I actually discovered he’s put together our “Adventures” Series Bible while organising my original story and character notes to him, so as well inspring my scribbles and ideas with the drawings he’s come up with so far, he’s also saved me an important writing task and I’m realising just how much of a real team effort co-piloting this creative journey is turning out to be….

One last item on the space-agenda I’d like to mention here is that I’m working on a new “Sidebar Story” for one of the Featured Fiction pages of my Official Writing Homepage called “Our Man On Mars” which will be ready for launch in the next month or so and gives added insight into the “Moon Crater: Adventures” universe, so watch this space for more news on that and, as ever, keep an eagle-eye open in the (most un-) usual places… 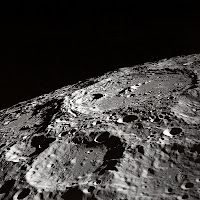 By year’s end I’ll hopefully be able to whet reader’s appetites to the world of "Moon Crater"TM, with many questions lingering in YOUR head, including, “Who are YOU?” “What was The Total Eclipse?” and “Why did the Moons Dance?”

p.s. You can catch up on all of the launch preparations for the "Adventures" by reading Rich and my own's introductions and see the initial ideas on the "Launch Page" by going to my Official Writing Homepage and clicking on a suitably "spacey" object on the desk top!
about writing New Stories sci-fi writing and the Web