"Seven for a secret never to be told..."

- May 21, 2009
# "I dreamt I saw you walking up a hillside in the snow, casting shadows on the winter sky as you stood there counting crows..." - Adam Duritz 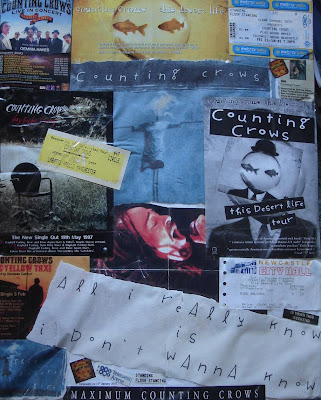 This month sees the return to my hometown of “my favourite band, Counting Crows”… - I haven't seen them play live for about six years and it's sure to be a brilliant gig... (reviews of the Newcastle, UK show are likely to appear here by the end of May) 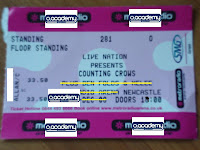 I've always judged whether I'm "into" a band by the fact of me liking every song they put out, and borrowing their first album from a friend back during my undergrad days in the mid-90s, I was hooked from the get-go. Since then I've listened out for all their B-sides, bootleg live versions of songs (which constantly change from show to show) and any of their rarer tracks that they've contributed to TV and film soundtracks over the years...

As a writer myself, wanting to learn from my peers in all mediums of scribbling, looking at the songs of Counting Crows from a storytelling point of view, the lead singer and writer of most of the Crows songs, Adam Duritz, definitely knows how to “spin a good yarn”… He deftly mixes both fact and fiction together to paint amazing snapshots of life and lost loves through often meloncoly tunes, but there's plenty of electric rock classics that still tell a good tale in the band's back catalogue to wash away those perhaps drearier tunes... There's even a bit of a cult following for a character called "Maria" who reappears in a lot of Duritz's songs but who is supposedly just made-up - it's quite an interesting tale in itself to follow when you look into the history of it all... (click on the word "Maria" above to check out the mystery!) 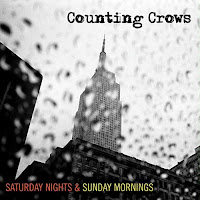 Anyway, that's about all I wanted to say about that, apart from reiterating what I've said before on my blog, that music is definitely one of the key things that helps me get down to concentrating on my writing and also can at times inspire me creatively with my scribbles, and Counting Crows is at the top of my "favourite bands and singers of all time" list, which only actually numbers a small handful in total... I'm sure to post about the rest of that list in due course here on my online writing journal, but for now, here's another list of my recommended 5 Counting Crows songs (in chronological order only!):

If you don't want to just take my word that Counting Crows is a fine band, you can check their performances of the songs above and quite a few more at one or all of these brilliant showcase pages for the band:


about writing memories music on other writers