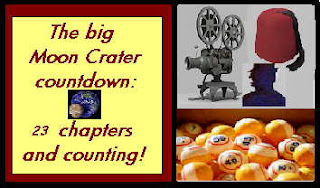 3 things that I've achieved this week with my writing:
* I’ve completed a potentially difficult twin chapter denouement...
* I’ve written the beginnings of a promised new sci-fi series...
* I’ve vowed to venture into the audio world with my future redrafts...

A sentence from the new "Moon Crater" chapter:
Jo looked from the slowly-closing door, back at Billy and said with a grin, “We’ll have to remember that tune in case it comes in handy in the future…”

It's been a funny old week what with one thing and another... The writing's still going well but I'm now at the stage where I'm eager to have the first complete draft of the manuscript done and dusted - got to keep going, got to keep going... Anyway, for all the stresses of work and writing and the pressures that I put myself under with them, I've still been grinning this week because a friend recounted a nightmare she had about my wife and I in which I panicked too much about a job interview and overdosed on sandwich paste! Very funny imagery there - don't know what I was doing using sarnie paste to prepare for the interview but I'm glad I was warned - I now know what NOT to do next time I have an interview... (Thanks, Tot!) It did get me to thinking though that inspiration for fiction can come from all sorts of places, and dreams (as well as nightmares) can be a very fruitful gathering ground for story ideas - who knows, maybe a new short story with such a premise as sarnie paste ruining a new job will appear sometime soon on my Indie Fiction page!

My mind’s been also wandering ahead this week to the second draft of Moon Crater a little bit more. For now it’s pretty important that I keep my sights still fixed on just finishing the last few chapters of this first draft though rather than being tempted to fiddle with the earlier ones I’ve already completed. One thing I am thinking of doing when it eventually does come to the second outing for the story however is to read the first draft chapters onto tape/CD and get a feel for how the sentences I’ve crafted sound outside of my head and off of the page. I've not done this before but it's been recommended to me before a few times. It's also preparation for an audio extravaganza I'm planning for my writing next year (for more on this, see the News section of this post below!)

But I digress - onto the chapter of the week - 23... I mentioned last time about the entire Moon Crater cast of characters appearing over the course of the pages of Chapters 22 and 23, and with the completion of 23 I’ve realised that it wasn’t just a case of simply sticking in as many of them as I could for the sake of it, but more that each had to appear in an interesting way for the reader – every one of them has their own story that intersected at this critical peak in the story so it always made sense to have them in there – but in the actual writing of it, I discovered some creative ways to bring some of the more marginal characters in too – exciting stuff this writing lark – no matter how much planning you do, there’s always something surprising left for the pure routine of writing to throw up!

My other writing news this week:
- As I alluded to in the “3 things achieved” section above, I’ve been busy writing the beginning of and putting the finishing touches to "Simulacrum", the first part of the promised ongoing sci-fi series of adventure stories across at my Seal Your Own Fate page. I’m really excited about this and we’re only a month or so away from launch time, so keep your eyes fixed on the skies for more very soon!
- Also in a few weeks time I’m going to FINALLY post another of my 2007 Coming Soon stories as promised back in January, over at my Literary Stories page – the write-up of Moon Crater has taken priority over the myriad of writing projects I have going on but I’m still working towards bringing ALL of the stories I promised at the beginning of the year to the various pages by the end of 2007!
- I’ve also begun reading and researching an as yet little-used writing weapon in the artistic arsenal that is the internet and that is “Podcasts” – after hearing my own little voice on my interview with the Live Theatre (see the "In Review" section in the sidebar below for the link) and realising my speaking voice needs some work (as well as my writing voice!) I’ve got grand plans to bring you my thoughts on life, the universe and all that as well as special “story corner” extracts of my upcoming work and anything else I can think of to bore the general reading or listening public out there… It’s going to be one of my major strivings for 2008 and will hopefully help me develop more as an all-round writer-personality, but as well as this, I think you’ll gain greater insights into my work and where I’m coming from with my scribbles…

Books/writing I'm looking at this week:
Young James Bond Book 1 - Silverfin - I've finally finished Harry Potter 4 and while I wait to buy my copy of HP5, I've moved onto the new Young Bond series by Charlie Higson - cracking stuff, Gromit!
Rough Guide To The Internet - A really cool book I picked up cheap - it's got a great section on podcasting which I'm immersed in at the moment!
Michael Rosen's poetry - after seeing and meeting Michael Rosen at the Edinburgh Festival recently I'm delving into one of his poetry collections for kids - riveting rhyming reads!

Next week:
It’s the final “full-length” chapter of the book for our two tired tykes and we hone in on a relationship between two people that’s been evolving and re-evolving since Chapter 1, but with the appearance of messages in a bottle from far away, this story is far from finished…