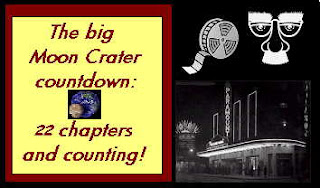 3 things that I've achieved this week with my writing:
* I've discovered a magazine to aid my search for an agent.
* I've written part of a difficult “twin chapters” section of the story.
* I've glimpsed firsthand what the "celeb" me might look like.

A sentence from the new "Moon Crater" chapter:
Just inside the main doors, there was an old iron spiral staircase which disappeared into the ceiling and to their left was a small lift door with a heavy-looking cross-hatched gate across it – the sign above it said ‘Up for the talls!’

It's been an exciting week in writing for me with a whirlwind trip to the Edinburgh Book fest this past weekend - the first time I've ever been. We decided to get tickets a little while ago and saw two great events, one of which was particularly relevant to my writing as it was the new Children's Laureate who was speaking - Michael Rosen, (the other event was a husband and wife pairing, Diana & Michael Preston, who had written a history of the Taj Mahal, which was really interesting in itself too...)

Anyway, the whole experience really renewed and invigorated my enthusiasm for the end goal I've got with my book and the strivings I've set myself week to week since May here on my blog journal. Edinburgh's a brilliant city for writers anyway but add in the fantastic book festival and it's a paradise of literature (I'd particularly recommend hunting out the free Writer's Museum near the top of the Royal Mile!) The Book Festival itself had lots to offer with a full children's literature programme which I'll hopefully go back in future years to see properly (they were sold out this time!) - but I took advantage of the kids book tent which had loads of new titles to browse and see who the new big hitters are for this coming year.

That hasn't really got much to do with this week's chapter but I just thought I'd share... What's perhaps more relevant is the fact that the LIVE THEATRE INTERVIEW I did a couple of months ago is now up on their "members of the public" website - more about that in the "Other News" section below and a detailed analysis of my experience with that is coming soon... (For now there's a small preview pic of my interview page to the right here, at the top of the sidebar!) Anyway, the "soundbite" they've used at the bottom of my interview page sums up the feelings of Billy and Jo in the story by Chapter 22 - so find the link below and check it out to gain an extra insight into the tale of Moon Crater...

I've realised there's a lot of pairs of chapters in this story, and Chapters 22 and 23 are sort of "twin chapters" or partner pieces as the puzzle parts fall together (as were 19&20 - in 19 the jigsaw solution was handed to Billy and Jo and in Chapter 20 they began to put all the pieces together...) So too in Chapter 22 we are led to the conclusions that have been building for the whole novel and by 23 we'll have the fullest picture of the whole puzzle so far... It's a very colourful and frantic chapter too with probably the biggest character count of the book to date (I keep thinking of those big Beano and Dandy posters that came free with the comic every so often that had every single character they could fit onto one picture at once!) OK, that's enough cryptic clues for now, I think...

My other writing news this week:
- As I said earlier, I’ve been to the Edinburgh Book Festival this week and made some initial agent discoveries up there – exciting stuff but more on this in a "feature" post, come November time...
- I’ve added some new links to the “In Review” section midway down the sidebar on this blog page – there’s two for the Indiana Jones fan fiction story that links to comments by other fans on my prize-winning story that’s still at my Adventure Stories page, and the other is a forum discussion about the background to how I crafted the tale. There's also a link to some other forum feedback I had at the Writer’s Digest - anyway, it's all in the “In Review” section...
- As I highlighted above, my Live Theatre interview is now up at http://www.talkamongstyourselves.org.uk/ - on the site, select "Enter Site" then "Sound", then when all the little thumbnails appear, I'm on the very lefthand column, third space from the bottom (green bag strap over a blue top as it appears in the thumbnail!) - again, there'll be a more detailed report on my experience of that is coming in October...

Books/writing I'm reading/looking at this week:
Michael Rosen's writing website - the website of the new Children's Laureate – an inspirational speaker/reader and all-round nice guy…
Carousel Children's Writing Magazine - I’ve linked to this on the main sidebar permanently now in my “Favourites” section but I’m chuffed to have stumbled onto this magazine for kids writing at the Edinburgh Festival – a great read and worth subscribing to…
Carousel's News Blog - more Carousel but it’s because I think it’s THAT good! This gives you up-to-the-minute info about what’s going up and down in the world of children’s literature…

Next week: In Chapter 23, our fanatical film friends finally see what they’ve been striving for, for about ten chapters but sweet comes with sour as they learn more than they wanted to about several other characters all at once…