- August 16, 2007
# "And, we're sorry, Mr Jones,... it's time..." # - Ben Folds
The grand plan: to finish the novel I've been working on for about 8 years over a period of 5 months! All of the planning, plotting and preparation is over, it's time to just get down and write the blighter! Hopefully along the way I’ll be able to pass on some tips for other first-time writers as I discover them myself! So with a working title of Moon Crater, this is my week-to-week experience of its creation to complete-draft stage... Chris G. Allan (May to Sept ‘07) 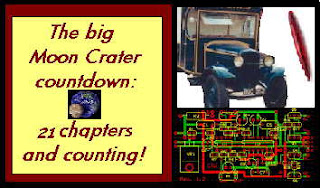 3 things that I've achieved this week with my writing:
* I've worked out more precisely how to reveal one of the minor surprises of the book with Chapter 21...
* I've advanced my planning of "Moon Crater Adventures" with a little help from a professional...
* I've been updating my main website content with little tweaks here and there...

A sentence from the new "Moon Crater" chapter:
"Just who are these guys?" gasped Jo. "And do you think they're recruiting at the moment?"

It's been a fair few weeks since I've written a post for my big write-up so apologies for anyone glued to their seats for this next exciting installment (you can sense the humour in my typed words here, right?). Anyway, I've just been getting caught up in the daily grind of life and work outside of writing but it definitely doesn't mean I've not been making sure I fit in my much-needed tonic of writing the new chapters of Moon Crater still...

Before I get into the depths of describing this week's chapter, I'd like to make a tiny rant - these past few weeks, I've been getting distracted, frustrated and annoyed at people who "want to spoil the ending"... The final Harry Potter book came out recently (in case you didn't hear) and as you may have read here, I'm only up to Book 4, so am still three behind. My wife's actually read about 21 Harry Potters (being the potty fan she is, she's re-read all seven about 3 times each at least) and she knows despite me asking what comes next I don't really want to have the end of Book 7 spoiled for me. But we've heard about people who are actually walking into book shops and peaking at the last page... WHY?! What's the point? If you've gone to the effort of trawling through and sticking with the story so far, where's the fun in jumping ahead and not really knowing how everyone got to where they get to (or didn't get to, if rumours about characters dying are true)... Anyway, I know that Moon Crater would be pretty rubbish to a reader if they jumped to the end first and wouldn't make sense - it's the adventure of reading the story as a whole, in the order an author intends, that makes a good book, isn't it? Suffice to say, that's my rant and I'll never understand the need for spoilers (except when it comes to Lost - I mean, everyone NEEDS to know what happens at the end, cos we're all confused in the middle!)

OK, then... Deep, cleansing breath and back to Chapter 21... I always wanted to be a spy as a kid and since I never enrolled into MI5 or became a spook in real life, writing is a great outlet to allow me to live out those fantasies on paper (I, and my characters, can be anything in fiction, in fact - an astronaut of the future, a member of the First Nations of America in the 1880s, even a young boy on the Northumberland coast watching a ghost galleon sail into the bay in 1597...). With this current chapter I've got spyerrific with espionage technobabble and the works. I can't say what part of the story, the spy element comes into play without ruining the plot, but suffice to say it's to do with the strange "Institute" which is referenced on my official website.

Part of my original spy adventure thirst came from Choose Your Own Adventure books - one writer I admired for his Indy Find Your Fate stories was RL Stine and this week I talked to him! OK, admittedly it was just by email but still how cool is that? He gave me some really good advice on how to write a "branching novel" with multiple endings and twists around every page turn. (not that Moon Crater is one of these, by the way) - to find just what is going to be my very own "branching story", turn to Page 1 now...