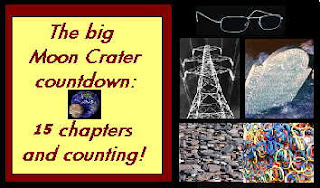 3 things that I've achieved this week with my writing:
* I've written out for the first time an action scene that's been playing out in my head for ages!
* I've conquered a small bout of writer's block over said scene above!
* I've drawn a few new conclusions about the best way to end a chapter!

A sentence from the newest chapter of "Moon Crater":
Billy froze, flattening his body against the cold stone he was hiding behind. Right at that very moment, he was the most scared he'd ever been in his entire life...


I've been finding it difficult to keep writing this week with the summer sun blazing down - the pull to be out in the fresh air is strong and I've also found a bit of a slump building up in my writing - it's not that I'm losing faith in my ability to finish the story but I haven't had as much gusto this week as before... That said, writing this blog post is suddenly helping to re-ignite my enthusiasm so it's probably just been a bit of writer's block in some form or another.

I've also been reading about finding your writing voice this past week, which I'm always interested in developing, along with my writing style. Moon Crater is written in the simple third person with a fixed viewpoint on one character in particular but I've wondered from time to time what it would be like as a story if it was written in say the first or second person... Anyway, in an attempt to flesh out the story and as well as exercising my writing voice more, I'm going to try an experiment and keep a separate notebook, writing the story of the novel from the family pet’s point of view as a short story. Maybe it’ll make it onto one of my story pages once I’ve finished it...

Notebooks are great things for a writer, by the way. Wherever I go on holiday, I always buy a few in small touristy shops or newsagents, never spending more than a few pounds on them if I can help it, but always saving them up on my writing shelves (it's amazing how fast you can fill one - and you SHOULD ALWAYS write every single piece of an idea down, no matter how trivial, cos I find I can never remember things as easily as I might imagine later). Ages ago on this blog, I wrote about keeping notes as a writer in more detail - you can click here to revisit my words there...

Anyway, back to this week's chapter in question... With 15, for all I was SO looking forward to writing a particular action set-piece scene, I also found it very hard to bring myself to commit it to paper when actually sitting down to write it up - it's an odd phenomenon to observe when the time has come to finally write something you've built up in your mind for ages and you hit a brick wall - but perhaps some part of you is scared of mucking it up and you sort of freeze on purpose. Suffice to say I HAVE written it out now and am pretty pleased with it - let's just see how I feel when I come back to it in the second draft in October time this year...

Chapter 15 has also had me pondering on cliffhangers and hooks this week. Both this chapter's ending and actually the end of last week's chapter, 14, changed quite a bit from my original plotting of them. The story takes place largely over 7-day period and I did envisage that when I began a new day or reached the end of one, at whatever point in the story I was at, they would begin and end new chapters (still with me?). But these past few week's whatever thoughts and control I thought I had over my own book have been thrown out the window by the story itself wanting to evolve differently - it's a pretty exciting thing when this happens and I've read about stories and characters taking on lives of their own and branching off in new directions, I've just never had it happen to me before - so, as long as I keep steering it on a steady course for where the final destination is meant to be, at present, I'm thinking, who am I to argue with the story itself?

My other writing news this week:
- The new blog look is up and running here! And after originally wanting a "white/clean" look to the blog, I decided light blue was a more welcoming colour for readers... But what do YOU reckon? (adendum - I've changed the look again - didn't like the "all blue" look!) I've also tried to do something clever with a sketch of Billy & Jo's village in the background of the main title of the "Year of Fear" above but don't think it's come out very well - I didn't exactly want to give too much away about the layout of the place, but I don't think you can actually make anything out at the moment... The little touch-ups here and there will continue over the coming weeks on the blog, with more concept art and doodles being added as I get them scanned in...
- After reporting last week that I'm preparing to launch one of the Coming Soon stories I trailered back in January, this week, it's become contagious and I'm now prepping a second of these to "go live" over at my adventure stories page - it's one of my favourite stories to date too, so keep an eye out to the horizon, across the plains, as the stagecoach delivers this tale very soon...
- This is sort of writing related because I intend to write a short story about it, but this week, I was unexpectedly surprised by a peace lilly appearing in amongst the hitherto green big-leafed plant which I've had on my desk at work for about two years. At first I was concerned cos it looks like a Triffid but after I calmed my imagination down a bit I was so awe-inspired and touched by it that I'm determined to develop a short story about it sometime, somehow...

Books/writing I'm reading/looking at this week:
"Strange Objects" by Gary Crew - I'm cheating here because this is a book I REALLY want to read - sounds like it'd be my cup of tea - only thing is I think it may be out of print...
The "Penguin Books Blog" - I stumbled upon this big publishers blog this week and found an interesting post about what makes a good author blog…
"Developing a writing voice" - Since I've been blogging on a bit about my literary voice this week, here's an interesting article about just that!

Next week:
Our two intrepid explorers get the chance of a lifetime to delve into an Aladdin's cave of treasured objects from something that's very dear to their hearts... Plus, Chapter 16 is actually one of the pivotal chapters in the book as it carries with it the essence of the story! I'm a bit nervous sitting down to write it, actually - but, hey-ho, let's go...