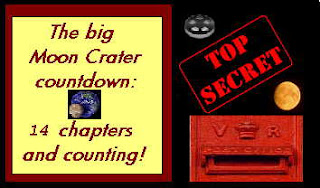 3 things that I've achieved this week with my writing:
* I've finally written down a difficult sequence that I wasn't too confident about in Chapter 14...
* I've made a decision of "taking a risk" with my writing to look again for ways to read my work in public...
* I've successfully completed the first month of the new working ethos for my novel...

A sentence from the newest chapter of "Moon Crater":
Billy stared at his dad, all smug and comfortable in his armchair, and slowly uttered the words he knew would make him sit up and pay attention...


It's the end of the my first month of the new "writing routine" I've imposed on myself and I suppose I should just reflect on how successful I've been with it so far... On the whole I feel it's been a brilliant start and my creative output of Moon Crater has certainly risen ten-fold by writing the four new chapters within the structure of my new routine. It's been tiring some days fitting in working full-time with my writing and I've not always been successful at getting myself up at 6am as planned, but I suppose the main thing is I've made a good start at it, and for the following 4 months, hopefully I'll be able to keep it going to reach the complete draft stage - May 2007 overall, then, has been a good start to my "most creatv yr yet"...

The other thing I've been thinking about with these blog entries of a "first-time writer's experience" is my hope that I might provide some practical advice to help other amateur writers too, (and in the process maybe I can help myself learn more as well). Between 2003 and 2005 after years of writing short stories for my own pleasure and distraction, in order to "get serious" with writing, I managed to get onto an MA in Creative Writing - while this satisfied my already inherent thirst to write it also gave my short story writing structure and enabled me to begin those first crucial plotting plans of Moon Crater as well as the first 8 or 9 chapters... Taught courses are obviously not for everyone and there has always been a debate about whether you can actually "teach" creative writing, but the course was not only important for the reasons I've pointed out above but also because it provided a forum to talk face to face with other like-minded writers (even if they wrote in different genres and styles) and crucially I began to release my own writing into the public domain, learning how useful an exercise reading my own words aloud to others could be. At present, in the depths of this "big write-up" of mine, I'm increasingly aware that this is what's missing from my writing practise - that is, experience in reading my work in public (something all writers have to do, it seems) - so if anything, that's a new resolution of mine at the end of this first month, to make in-roads at regular readings - how and where I'll achieve this, I'll let you know when I figure it out!

And so, back to the chapter of the week - this 14th one is a "beginning of the end" sort of chapter where Billy and Jo find something they've been looking for without actually trying and a pretty big denouement scene takes place too. A lot of answers from early in the book needed to be revealed with this chapter and hopefully I've laid the foundations of this with this first draft of it, so that in October when the next draft begins I'll be able to polish it more. This doesn't mean that all puzzles and questions from the first half of the novel are answered in Chapter 14, however - there's definitely other spiralling consequences of the revelations found here, and this is not the end of the story by any means... The "difficult scene" I mentioned above related to family - an important theme in the book - we see two contrasting families in the course of this chapter, and it's the difference between the two that drives the chapter on to it's dramatic conclusion. I'm soooo looking forward to starting Chapter 15 now!

In my other writing news this week:
*Over at my main website the homepage has received a bit of a fine tuning as Twig tinkers away at his last few duties as official designer - from next week, he's off on a grand quest to re-home his penguins... But for now he's spruced up the main homepage… I'm going to be really annoying and not actually tell you the bits that have been added - it's up to you to search round the desk top there and find the new stuff for yourselves!
* I've been looking over new templates in Blogger for the re-skinning of this official journal blog (which I referred to last time) and I think I've found one that suits the "blank page" motif rather nicely that I'm currently wanting to run with over these next five months of writing...
*I'm preparing a new "Coming Soon" story to launch in the next few weeks - been re-drafting and proofing it for a while - it'll be over at my Grown up/literary fiction page so keep an eye on the treeline there!

Books & writing I'm reading or looking at this week:
A blog for a writers' retreat - not so much a "teaching" creative writing centre but a place to share ideas and scribbles with other like-minded writers - I've never done an Arvon course but I hear good things about them...
Stephen King's writing tips - I love King's non-horror writing, it's full of adventure and overlooked cos of his more gruesome output, I think...
Harry Potter Year 4 - I'm still on with HP and loving every exciting page turn - up to the bit with the Dark Mark so far!
The Ruins of Dantooine - I haven't got bored with HP4 but have had this book for a while and started reading it and am devouring every page!

Next time:
Chapter 15 is all a-buzz with atmospheric weather conditions and a showdown in the mud for our dynamic duo while here I'll be debuting the new "blank slate" effect blog skin - it's all change for my characters and for my writing journal, for better or for worse...