Good things come to those who wait...

Just before I post the biggie of the week on this blog which I pointed to at the beginning of last week - the vote for what the main characters of Moon Crater will look like, I just want to share some news about some prizes I finally received last week in the post from winning 3rd place in a writing competition in 2005.
(See this post from me a few months ago for the lowdown on the competition:
http://cgallan.blogspot.com/2006/06/razor-perceptions-that-cut-just-little.html
and on this link you can actually read my 3rd place story if you scroll down to the "winners" section: http://www.theraider.net/features/contests/fanfiction.php - Indiana Jones & The Quest Of The White Knight)...


Anyways, last week, Royal Mail delivered a mysterious package to our house with an Oklahoma, USA postage stamp on 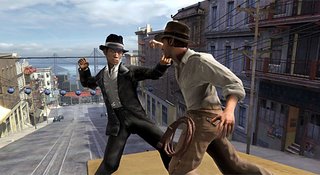 it. It was heavy, didn't rattle when I shook it, but still felt like Christmas had come a few months early! About a year and almost five months after the competition closed, I had received the complete Indiana Jones fiction books as written by Max McCoy. And because they had taken so long to forward the prizes, the guys at TheRaider.Net had seen their way to getting the books signed by Mr McCoy himself! It's weird, how in the last few years, I've been more interested in collecting books that were signed by their writers - I think it's probably because it's like you're somehow making a creative connection with another writer by holding such a thing... Or maybe I'm crazy! (either is possible...)

But the whole thing has got me to thinking about my favourite action adventure hero - Indiana Jones - again. As a kid I used to watch the old black and white Zorro series (no, I'm not that old, but they were repeated on TV in the 80s) and I love any sort of films that are set in another era - like The Rocketeer or Young Sherlock Holmes & The Pyramids Of Fear. But most of all I'm a huge Dr Jones fan - on honeymoon in Canada I even bought a fedora! 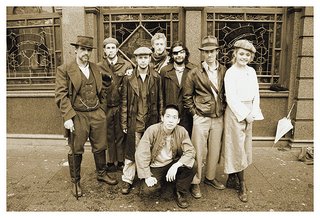 The Indy writing competition on the Raider.Net was a fan fiction driven effort and I've got a lot of respect for this sub-genre of the creative spirit - there's an Indiana Jones fan film in production now, made by a Scottish group that's really worth watching out for - you can see their trailer and first 5 minutes on the website they've set up for the film. It's called Indiana Jones & The Treasure Of The Templars - check it out at: http://www.treasureofthetemplars.com/site/


There's even talk that Harrison Ford himself as Indy will be making a comeback soon in a fourth film and I can't wait. Sequels and prequels (I'd recommend The Young Indiana Jones Chronicles TV series for this) are OK by me and I'd love one day to be able to revisit characters I've created and open up their pasts and look at other parts of their lives which weren't known or revealed in earlier adventures... 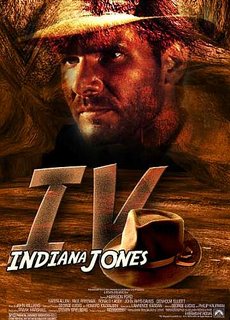 At the moment, another Indy fan fiction story I began and am co-writing on the forums of TheRaider.Net might also be interesting if you fancy a squizz (read from post #63 on that page onwards... - my screen name on there is BrodyIsDead - and if you've read my 3rd Prize story from the link above, you'll know why I called myself that!) - and remember, it's open to anyone to join in and write a new paragraph or sentence of to move the story forward. So if after reading it, you think, "Hey, I think the tale should take this turn..." then, why not get involved? Just sign up to the forums, get yourself a user name and join in this old-fashioned "pass it on" experience of storytelling:

I'll close now, with the promise of more adventures to come and an Indy anecdote from a few years ago when I was travelling around Europe and in a Madrid hotel switched the TV on to find Temple Of Doom on, but dubbed over into Spanish - Indy was talking to Short Round and suddenly said, "Fortuna y gloria, chico, fortuna y gloria". That's the place everyone who writes dreams to reach... but before we get there, there's a lot of hard work ahead, I suppose... ;p
Fan Fiction New Stories