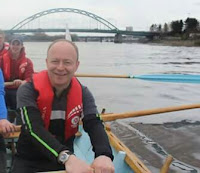 # I must be looking for something, something sacred I lost... But the river is wide and it's too hard to cross... # - Billy Joel

Setting aside that larger metaphysical question that I’ve decided to title this post with (even though it’s a brilliant starting point for a story: are we actually existing within someone else’s dream or nightmare, even...?), the title words here actually refer to a new outdoor hobby I’ve taken up this year – rowing.

"Having a go" at rowing my boat down the river is something I've always fancied doing, but hadn't taken the opportunity at university to try, and for years I'd seen local to where I live (in Durham), yearly boat races. I'd once enquired to a locally well-thought-of rowing club but had been kind of interrogated on the phone asking if I'd ever rowed before and who I knew in the club, which felt a bit snobbish and off-putting.  But then on a lunchtime stroll earlier this year I stumbled onto Gateshead Community Rowing Club. 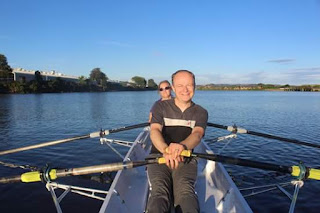 I took a chance and called up to go onto a taster session, and found the small club really friendly and welcoming.  My first time out in the boat was in a "skiff" boat with five of us manning it, including the "cox" who was keeping an eye on the four rowers and calling out the pace.  This led onto a couple of more tasters that then led onto a six-session "Learn to Row" course.  This is the course for you if you want to get serious about rowing, it gives you the chance to learn about things like "sculling", "feathering" and "rigging" and we got to have a go at sweep rowing in an indoor rowing "tank" at the amazing facility at Maiden Castle, complete with wave machine, which was pretty intense at times. 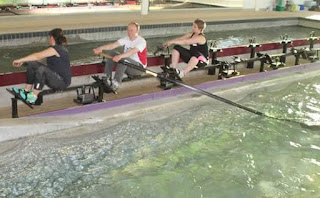 The Gateshead club that I've since become a member seems to be unique in our area in that it truly does live up to the "Community" part of it's name, with a capital C.  The social side of rowing wasn't something I was really interested in (being ever the shy, retiring introspective writer type!) but so far I've met some really nice people, and we're all from a wide variety of backgrounds.  Gateshead is also one of the few clubs in the country that has facilities for para-rowers as well.

I had the privilege of rowing for the first time in a "race" event with a mixed crew in late August when I took part in the Great Tyne Row (also dubbed "the slog on the Tyne").  Our crew took responsibility for cleaning our skiff boat the "Harry Clasper" the night before the event and for loading the small fishing-style rowing boat onto the trailer ready for the race which started at Newburn along the Hexham valley and would take us due-east, all the way out to the mouth of the Tyne and North Sea at Tynemouth.   The 25km (near 16 miles) route felt every paddle the slog that its nickname suggests but the crew was jolly, the sun was shining and I learned a lot that day in terms of how to control my rhythm while rowing and a lot about myself in terms of stamina (I'm maybe not such a weakling after all!). I was put in the pace-setter position at the stern (back end) of the boat, right next to the cox who was shouting out our crew's directions as we went through calm water on the quieter parts of the Tyne, then mini-squalls which affect the waters by the iconic bridges in the centre of the city river area, and onto the real testing times towards the end of the route as we made our way through the old and mostly abandoned shipyards through Wallsend and North Shields. 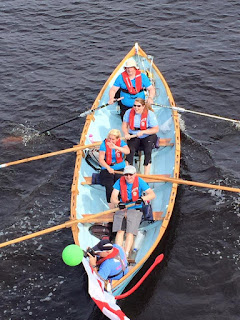 Being the pace-setter meant I couldn't really ease off for the 16k but we did take a few crew-breaks to fill up on snacks we'd brought along and take on water (not the boat, you understand, but the crew to keep hydrated!).  We (sort of) sang some sea shanties, we waved to other boats taking part (there were over 50 boats on the river that day) and also called to family and friends who lined the route to support us.

All in all, so far my adventures in rowing have been a great experience.  I do have the attention span of a goldfish at times, but hopefully this foray into a life on the ocean wave won't be boat that passes in the night (is that enough nautical metaphors?!) and I'll keep on sailing onto the wide blue horizon in the years to come.  If nothing else, I feel like I've achieved a goal of just having a go at rowing and fulfilling a long-held ambition to dip my toe in the water, take a risk and try something new - what more can you ask of yourself every day?