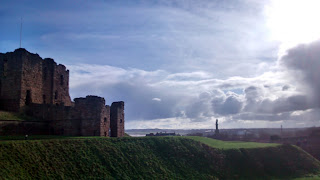 # "Birds fall from the window ledge above mine, then they flap their wings at the last second..." # - Cake

For a long time now, while I've been in the throws of drafting and redrafting my first adventure novel, I've been thinking about, talking about and even begun writing the first 7 chapters or so of a second, probably more ambitious novel.


I'm still on my "Road to Publishville" seeking out a literary agent who might want to represent that first novel (which now thankfully has a final name I'm sticking with!) but the classic publisher contract is for a "two book deal", so I've realised I need to stop beating about the bush trying to improve that first novel and get on with the hard graft of writing this second book, just in case by some miracle of miracles all the creative writing stars align sometime soon and my first book is picked up for representation.

By all accounts too, the second novel is all the more difficult to get on with and complete... But this new story for me at least is different enough and has an interesting subject and setting that should help me immerse myself in, (once I commit my time and effort to it, of course!)  I've called it "My History Mystery" for a few years and that's the working title I'll stick to until I can figure out an appropriate title (hopefully while the writing is going on, or by its completion).  It's set in a universe a million light years away from my first novel so the material and research is fresh for me...  And I also have a sort of "Bible" for that second book that I kind of didn't going into the first novel.  It's a hefty sort of dossier of typed-up ideas and scribbled-down notes that I've kept over the years while crafting my first book, so should in theory help a lot to keep me on track with the plot and characters as I go on.

The experience of writing that first novel has taught me some things about how not to tackle the second too.  I know how differently I'd like to approach this new book when scribbling it.  It took me about ten years to write the first (which is an average amount of time for a debut novel apparently) but for the second, and mainly for my own sanity, I just can't take that long...

There's also a couple of things (literary devices, if you will!) that I'd like to use this year and next to get this book to it's last page... The first is a free course that's coming up soon from those creative writing experts at the University of East Anglia and FutureLearn - they're the guys who I did a short 2-week screenwriting course with earlier in the year but this new course is a Writing Fiction course and is set to last for 8 weeks.  I'm looking at it as a way to focus my scribbling mind a bit, and hopefully as I journey through the 8 weeks, I can get some tips and tricks to help craft a better second novel too.  AND you can have a go at this FREE course too - FutureLearn really is a cool idea and has courses on all sorts of subjects but if you're thinking of embarking on writing something, this course could be just the ticket for you too.

Additionally, I've been seriously considering later in the year signing up for the National Novel Writing Month or #NaNoWriMo for short.  I've read a little about this over the last 5 years, and it's a movement that began in America, I think, and has spread over the pond to the UK too.  The idea is to commit to writing a first draft of a novel over 30 days (in November each year) - the total goal is to get 50,000 words written, in fact, which is a brilliant target.  So I'm going to do more reading on the subject and we'll see, come November if I get organised and motivated enough to use it to get my second novel back on track...

There'll be more updates on this into 2017 next year, but for now I'll leave you with the one lasting image that's a hint and inspiration to my second novel to come...


about writing getting published history New Stories writing and the Web