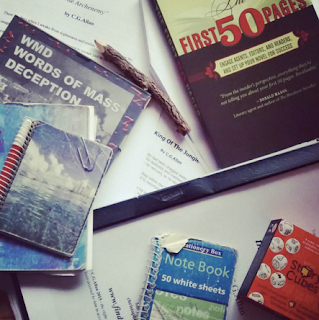 Once you get into a life of writing and start to read around your subject or listen out for sage advice from ‘those who are in the know’, you begin to hear things like “there’s only 7 stories in the whole entire world that just get told over and over again” or “you can’t write a lot until you read a lot” – now, I don’t necessarily hold to these particular beliefs about writing – they feel too prescriptive and “rule-like” for my yearnings.  But there is one particular novel notion in the field of creative writing that I am beginning to subscribe to and that’s the idea of “the power of the number three”.  It kind of comes down to the old odd numbers versus even numbers, but in nature random patterns of 3 do look better than a pair of things standing side by side…

To that end, then, for my 2016 writing preview, I’ve decided to work to this idea and do a similar thing to last year’s preview keeping it simple and giving myself just 3 (that magic number again!) writing aspirations for the year ahead.

1. First up in 2016, I’m going to be diving feet first into a new creative writing course – it’s with a company called Future Learn and is run through the University of East Anglia here in the UK.  It’s a scriptwriting course that’ll hopefully equip me with the tools and basic knowledge of the actual mechanics of writing for the screen, which I’ve been searching for, since I began branching into this new area of creative writing over the last year and a half. 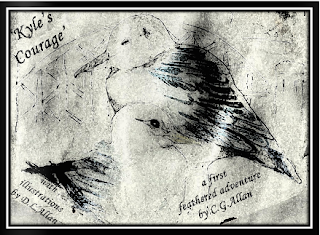 2. I’m going to be returning to my first love of Short Stories a lot in 2016, and it will begin with me writing a new Kyle the Kittiwake tale… Since writing the first adventure in this feathery narrative almost 10 years ago, I’ve been scribbling down ideas for many, many more stories in the series.   You can still read that first tale in Kyle’s life by going over to my Official Writing Homepage and clicking on a bunch of small objects on the desk top picture which you might find washed up on the riverbank… The Kittiwakes are due to return to my hometown under the Tyne Bridge sometime in April, so I’m going to set myself a writing challenge to start writing the new story from the time I see the birds return to the time they depart in late August.  Hopefully, I can do this on a yearly basis and in a few years I’ll release a “Kitti Collection” of stories…

3. And talking of collected tales, my main drive in 2016 is going to be editing together my first published short stories book! I’m looking at an Autumn release at the moment, via Amazon print on demand (so at least my parents will buy a copy!) – some stories will be ones you can find on my Official Writing Homepage but there’ll also be at least 3 (a magic number, you know!) exclusive stories to this print on demand edition…  There’ll be more posts on this as I progress through the editing process this summer and I share my experience using the print-on-demand service but I’m feeling rather excited about doing this – even though I’m still holding firm to my idea of seeking a traditional publishing route via a literary agent for my first adventure novel, these stories will see the light of day via my own guiding hand, and I’m really looking forward to the challenge of actually creating a book myself…

So there you have it, my writing plan for the year that is 2016… There’ll be some other exciting things going on along the way though – I’m on the verge of owning my own website after almost 10 years, which seems quite apt on the eve of my decade anniversary scribbling online… and I even have plans to launch my creative podcasting career, waxing lyrical about a certain Man in the Hat who I’ve been more than a little obsessed with since I was a kid with blocks on my feet which helped me reach the pedals of the car… (and you can go over to my Official Writing Homepage and find out more about this by counting down “3” (there's that number, once again!) along the film negative and clicking through to a cinema collecting page I’ve set up…)

Email Post
Labels: about writing getting published history memories on other writers writing and the Web