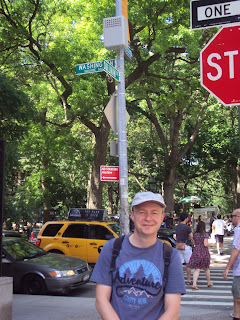 # I walk out through the shadows... of Washington Square... # – Counting Crows

Since beginning to write this blog almost a decade ago, each year I’ve always included travelog posts about where our annual holidays have found us trekking to next, holding firm to the belief that looking to the far horizon and travelling far and wide brings new experiences of the world that I can bring to bear on my creative writing.

For 2015, my wife and I had been saving up and planning for a summer trans-Atlantic crossing to see how the other half live it up in America.  Our first ambitious thoughts were to mount a rather large expedition around the East Coast, taking in Philadelphia, Boston, New York and Washington DC but funds wouldn't quite stretch to this epic trip so we opted to half that journey and settle for just New York and DC this time round (aw, shucks!) 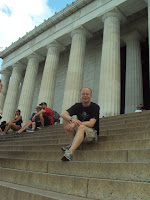 Now, I love long haul flights - yes, there's the usual tussle with the passenger in front with how far back they *try* to put their seat - and I never sleep, but that's because I enjoy catching up on the television and movies I've managed to miss over the last year with the on-flight media screens, which you just don't get on flights around Europe.  I've said it often before here on the blog, but my creative writing is most influenced by TV and film and I always enjoy discovering new intriguing screen stories that make me think about narrative in new ways (one such movie I watched on the flight to America was a Jude Law film called Black Sea). 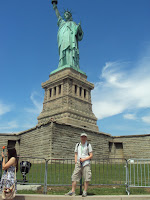 New York was our first stop, Stateside, and to me, although it's a city that attacks every one of your senses all at the same time, it was also a refreshingly familiar place (having seen most of its streets on film as I've grown up).  We had tried in our planning stages of the trip to spreadsheet the New York part of our holiday - not down to the minute - but in blocks of mornings and afternoons, visiting certain parts of the city.  The subway system is useful to get you across Manhattan, if a little rundown and in desperate need of repair in several places.  We got around most of the main tourist sights - Statue of Liberty, went right to top of the Rockerfeller Centre, saw the new One World Trade Centre and Freedom Tower, walked Greenwich Village, found the Ghostbusters firehouse, cycled around Central Park, and even took a ride on the free Staten Island Ferry, timing it just right at dusk to see the falling sun against the famous NY skyline. 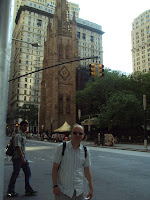 Everything in New York is a highlight but a couple of my favourite memories of the city that doesn't sleep is visiting FAO Schwarz toy store (just before it moved from its iconic Big location on Fifth Avenue later in June 2015) and getting my fortune read by none other than Zoltar himself (I wished I was a little taller, yes!) - and another great memory was seeking out Trinity Church "Heere at the Wall" just off Wall Street where the finale to one of my favourite adventure films played out (National Treasure).

Another personal memory was stumbling onto the cross-section of Sullivan Street and Washington Square in our walk through Greenwich Village.  My favourite band is Counting Crows and I often link to their song lyrics at the opening of my blog posts here - these two streets share titles with songs by the Crows and it brought a contented smile to my face to notice these street signs. 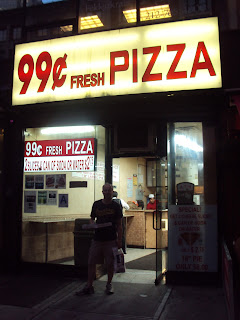 I enjoyed the fun and lights of big city New York more than I imagined I might but as we boarded our Amtrak train to make the two-and-a-half-hour journey south to DC, I knew I was going to love the capital even more.  For some reason I've always known I'd feel at home in Washington, and I did.  The place has a real laid-back feel to it, (despite us staying just next to the suburb where The Exorcist horror film was filmed and in the hotel where President Reagan was shot!)  The main attractions in Washington for us were the monuments, The White House and The Pentagon, which we'd applied to go and visit months in advance.  We were only told about two days before that we were "cleared" for our tour around The Pentagon, and took the Metro to the Pentagon stop beyond the city and Arlington Cemetery, and had an interesting visit, seeing the 9/11 memorial gardens too.  Back in the main part of the city, we also visited the Library of Congress (yet another National Treasure destination!) and Capitol Hill, although it was a shame that this was the year they picked to renovate the Capitol dome and all our photos show it under scaffolding (still, it dates our visit to a very specific time - just before the building's 150th anniversary).  The Smithsonian museums are exhausting but a must on any visit to DC too - and are some of the best places for free air conditioning (the heat in Washington was hitting record levels this summer, we were told). 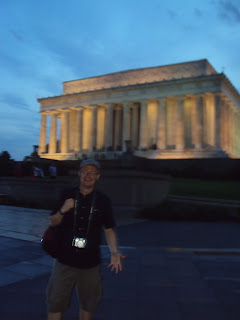 Like New York, we made lots of great memories in the US capital, but my lasting image will be of us getting to the end of our monuments avenue tour (led by guides of the "DC by Foot" group, who I'd really recommend, by the way!) and reaching the Vietnam wall when the mother of all rainstorms cracked open the skies and my wife and I, along with a few hundred other people, all dressed in shorts and summer wear, sprinted up the high steps of the Lincoln Memorial (which seems to have rain cascading down them) and into the shelter of its front, to stand under the statue of the great man himself and wait out the flash flood.  We were soaked but grinned at one another, knowing we were never going to forget this trip.

There's so much more I could say about our American adventure this summer, and I probably will be dropping short tales of the trip into other posts as the year goes on, but we've still got those places we didn't get to on our wish list - Boston and Philadelphia (again both with National Treasure links!) so this won't be the last time I post about journeying to the land of our American cousins, I'm sure of it...