"The Year for Scribbling Dangerously!" (the 2014 Writing REVIEW!)

For the past 8 years here on the blog I’ve been beginning my scribbling year with a review of my creative prose writing of the previous 12 months.  But you may have noticed recently that my blog has undergone a title change and had some new objects placed onto the header pic (more on these in the Preview post for the coming 12 months of “my life creative” next month!) 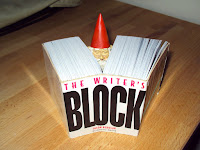 So looking back, last JANUARY, I reviewed the previous 12 months in much the same way I am now and in FEBRUARY, I previewed the coming 12 months and the path as I saw it then that my creative writing might meander down… I did lay out a shorter “to do” list for 2014, figuring that one poem, one short story and one novel would be enough to concentrate my efforts on and to keep me busy (especially since in my day job I was becoming more creative too – creative days seem to lead to collapsing in exhausted evenings, I find!) Well, that poem is still in the making... the short story has only really been poked at a little by my pencil in places (so still needs more work too) and the novel needs more time (not a great record of a year, is it?!) BUT there is some great stuff in the offing despite (and in some cases because of) all of these false-starts on my intended writing plate of 2014 – so keep reading to find out what leads to my 2015 writing preview next month…

As I got into the swing of things with my writing for 2014 properly in MARCH I began with a post all about “playing the numbers game”, talking about the way authors (and screenwriters) use various numbers to good effect in their narratives, and as plot devices.  I honed in on one particular number which I’ve spotted being used and homaged to a lot in film – the number “47”…

I then headed into APRIL musing over “my never-ending stories”, asking “is art ever really finished, or is it merely abandoned?”  Some of the stories I began working on 'back then' I’m still working on, so perhaps I’ve partly answered my own question but the ultimate conclusion I came to was as a writer myself, I will never abandon a story… even if I might take a break (however long) from one or two of them from time to time!  Also this month, across on my Official Writing homepage, I made sure the sound as well as vision were on, as I added audio clips to each page, as a way of providing hints to the stories I've written, am scribbling at the moment and hope to craft in the future...

In MAY I began to reshape the things to come for my writing (and this is the month that helped name this blog post of “writing dangerously” in 2014) as I took the plunge and entered into a creative opportunity offered by my day job at ITV called “The Big Think”… It was a scheme which gave me the confidence to structure and submit, and ultimately pitch an idea for an original television drama… (watch this space on the blog for more on my growing ambitions to write for the small (and big) screen in the future…

Midway through the year in JUNE, I got all familial, blogging about my favourite uncle – it’s often close family members who are the most influential on you (and your writing) as you grow up, and my Uncle John still spins the best yarns in our family to this day…

In JULY I rounded up the "initial" progress of my third attempt at writing a “Middle Grade” kids book – “my Gnome Gnovel” which I’d been Audiobooming about for just over a year, having my first attempt at podcasting as I creatively write…  This particular book hasn't been forgotten - it needs a little more development, so keep an eye out here and via the 'gnome' object on the desk top of my Official Writing Website over the next few years...

Come AUGUST, I expanded on my new interest and exploration of scriptwriting by focusing on a fan favourite of a TV show I loved the screen stories of - Star Trek: Deep Space 9.  My idea was that if I pull apart and interrogate the structure of shows I admire, I might start to spot common features and formulas to help me begin to write my own “classics”… 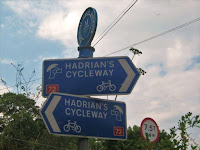 Wheeling into SEPTEMBER, I wrote more on an outdoor pursuit that helps both distract and focus my mind on my creative writing.  With A “Summer of Cycling Part II”, I journaled the journey I took with some work colleagues one late summer’s sunny day from Carlisle back to Newcastle, following the route of Hadrian’s Wall – and what an adventure it was too (one worthy of a short story at some point!) 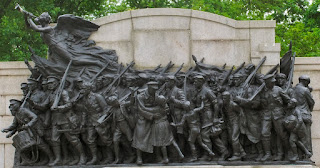 As Autumn began to make itself felt in OCTOBER, my mind turned to the centenary of World War One and I told the story of the extended C.G.Allan family tree stretching back into that “war to end all wars”…

NOVEMBER saw me having music on the mind, waxing lyrical about soundtracks and the mood music I use to scribble to…  I’m not finished on this subject, and as it happens, writing this blog post, I’m listening to some of my favourite film music from the National Treasure 2: Book of Secrets soundtrack.

I finished off the year in DECEMBER with a kind of an unexplained “teaser” of things to come… The sentiment of my “What’s past is prologue” post here on the blog wasn’t to say that I was abandoning all of my past works(!) but it was more myself coming to the realisation that (to quote a certain Sith Lord) “this is just the beginning” and reminding myself that I’m set on a path of a LIFE of writing, not just a finite period of my life… So in the new year of 2015, I’ll be facing the future and the changing nature of my writing – turn, turn, turning to the new areas of creative scribbles I want to head towards (but more on that in my February preview post!)