In the company of avid followers and new-found friends...

I’ve been spending the last few winter months with some new-found friends and having a brilliantly creative (if a little chaotic) time of it...  I’m lucky enough to have a day job where I’m able to spend some of my time at work following my creative leanings, especially in the area of books and writing, and recently I was given the chance to begin training on “AVID Media Composer”, learning how to put together short video films, specifically for a website that my own department at ITV runs called “Signed Stories”...

The site has been running for about 3 years now and has already garnered rave reviews, as well as winning a prize for "Plain English" and has even attracted an award for its humanitarian efforts.  I’m quite new to the role, so thus far my involvement has been minimal, but slowly and surely I’m getting to help out with various projects that lead to a completed “signed story” in British Sign Language. The process is a collaborative one and very much a team effort, which is a great way to work – we go through quite a lengthy schedule of filming the sign-language-user in our own TV studio and then taking an original children’s picture book and recreating the narrative with inventive visual effects...  My former incarnation of a day job working with television subtitles even comes in handy, as to help viewers of the site and stories, we provide captions to add to these TV tales…

It’s really satisfying as an aspiring author, having the chance to work in such an environment, and for a while now I’ve been given the opportunity to help contribute to the development of the “Signed Stories” characters, including some of their back-stories, as well as their future adventures… But all that’s still a little way off and residing as rough sketches in various notebooks, suffice to say that the main challenge to myself having been traditionally a writer of "older" fiction is to hone the art of writing for a much younger age group with these characters (but I'll get there with practice!)

For now, I’m being taught the joys of the AVID machine itself, getting to know its useful tools and less-useful foibles, (and learning to curse every time it crashes!) But the toils and effort put in does yield some stunning results… Leading up to the festive season, I got to work collaboratively as an editor on some Christmas carols which were hosted on the Signed Stories site: 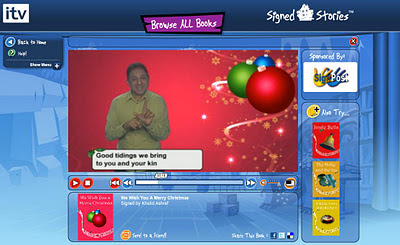 To see the entire list of Signed Stories carols,
CLICK HERE now!
(the particular carols I worked on were:
"Once In Royal David’s City”, “O Little Town of Bethlehem”,
“We Three Kings” and “We Wish You a Merry Christmas”)

Earlier in the year, I also had the opportunity to help produce some AVID-edited videos from CITV’s Share-A-Story competition in which children were invited to send in a short one-minute story, which if picked would be turned into an animated film.  Our department then took the animated films and added signing and our own animation to create a BSL presentation for the Signed Stories site:

To watch CITV's fantastic "Share-A-Story" series in BSL, CLICK HERE now.
(the particular Share-A-Story videos I worked on were:
“A Robot Who Comes to School”, “Farmer Frank”,
“When Some Aliens Came to my School”
and “A Giant Robot from Space”) 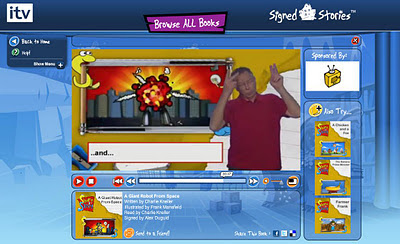 Most recently, I’ve been working on my first full-length book for Signed Stories, and it’s a BSL adaptation of Maisy’s Christmas Eve by Lucy Cousins. It’s an interesting process as an editor, working closely with the director and sharing a creative vision of how a final signed story will look… As I mentioned above, the development consists of a first stage where we film our signer in studio, against the "magic" bluescreen, retelling the words of the book in British Sign Language, and then in “post-production”, we use the actual pages of the original book (with author and publishers' permissions) to create our own animated take on the narrative, using moving images, wipes, fades and dissolves, as well as sound effects – all of which the AVID engine provides. 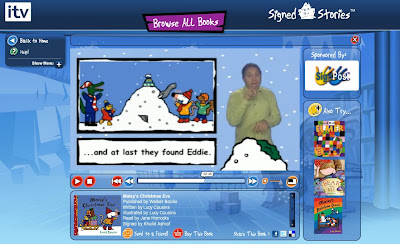 As I’ve said, the experience of now working in a more creative day job and particularly on Signed Stories (you should check out the rest of their website when you have the chance, as well as the TV show on Mini CITV!) is not only personally satisfying but it’s also teaching me a lot about how a variety of stories are told and put together (and makes me think more about being a writer in the multimedia age…) Heading into 2012, then, my outlook for continuing this creative life on all fronts is a positive one, but it’s also going to definitely be a year where balancing a busy creative day with the amount of creative writing I want to get done with my nights of scribbling will be tested – I’m hoping I can finally get the balance right... Or maybe I shouldn't stress too much about all the mechanics of writing, and just keep on enjoying the process - maybe that's how classic characters like Maisy the mouse manifest themselves out of nowhere in a real author's mind…