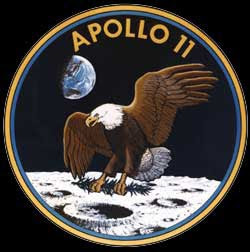 Reading my posts on here and looking across at my Official Website you could get the impression that I’m a bit obsessed with the Moon (in more ways than one!) Well, I won’t deny it – ever since I was old enough to go for a stroll with my dad and the dog on their evening walks, I would always gaze up on clear nights to the see the full Moon and wonder what it would be like to walk on it, what it had been like in the past and how we’d shape its future tomorrow…

You’d have to be living in isolation inside some distant impact crater to not be aware that 2009 is the 40th Anniversary of the time man first set foot on the Moon, and I just couldn’t let this year pass without marking it in some way on the blog. So I thought I’d give my own take on the celebrations as well as linking in a small sort of preview of my very own still-developing lunar-linked set of stories called “Moon Crater Adventures” …

For me, personally, the Moon has had special resonance at varying moments in my life so far… From childhood memories of my dad's recollections of standing outside the family flat at 3AM on “Mary Street” back on that fateful morning back in ’69, staring up at the glowing full Moon through Earth-bound binoculars (and even chucking a sickie from work the next day for a lie-in – tsk-tsk!); to HIS father, my grandfather, who spent his youth growing up in an earlier age of horse-drawn carriages and wind-up automobiles, and who was by all family accounts glued to the TV whenever ANY space shuttle was launched, fascinated, by those new-fangled contraptions for flying into space; to the film that my now wife and I went to see as part of our first date together – “The Dish” (all about the little-known story of the Australian receiving satellite that was used by NASA to relay pictures of the Moon landings across this planet on July 20th, 1969 – it’s really a cracking yarn and a recommended watch!) 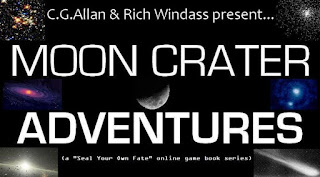 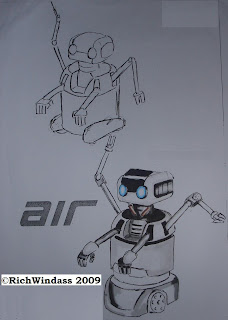 tantalising) mid-year mini update on my “Seal Your Own Fate” online gamebook series which I’m calling “Moon Crater Adventures”. Last November I gave out some exclusive info on the Adventures in the form of early ideas and drafts that came from the sketchbook of my co-pilot on the stories, illustrator Rich Windass. And since Rich has also this year so enthusiatically taken up the challenge of illustrating my “At The Time Before Time Collapsed” prelude to the first Adventure called “Simulacrum”, the “sneak-peak” in this post comes in the form of a couple of more sketches – this time of a pair of characters central to the plot – two robots, called AIR and ICE… Come November, this year, there’ll be a little more of the story of “Simulacrum” revealed in our regular annual update slot here on the blog but for now I can also tell you that quite fittingly in connection with the Moon landing commemorations, that the Prelud 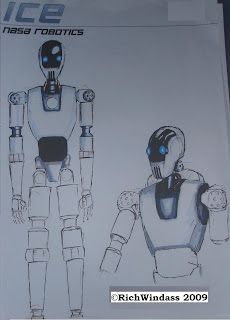 The commemorations for four decades since man first set foot on the Moon really have been something to watch this year (and watch A LOT of TV documentaries on the subject I have, recently, recapping the achievements of the entire Apollo missions, not just No11, as well as the Russian and European contributions too), but looking back for me now as an adult and writer of adventure fiction and occasional science fiction isn't as exciting as gazing forward (and still wondering “What if...?”) There’s a new “space race” getting geared up through the world’s media all centred on the Moon because of the possible discovery of water that could be used as fuel, and only in June this year NASA’s “LCROSS” was launched in an attempt to prove just this fact… (it will complete the first part of its mission in early-October and I’ll be keenly watching for the results as they’re beamed back to Earth to see if it all leads one day in my own twilight years to a futuristic 21st century “Tranquility Base”… 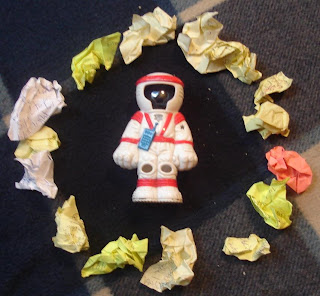 There's lots of brilliant links out there this year to mark the 40 years since Armstrong first inspired the next generation to imagine the possibilities of space exploration but I'm going to end this post with my favourite 4 links (one for each decade of exploration and inspiration so far) from the thousands that 2009 has produced to celebrate Man’s involvement and fascination with the Moon:

p.s. I didn't have room to talk about it in this post but Google Mars is also a good resource site for future space explorers and adventurers to visit, but, then again, that's best left for another time and another story...
film history memories New Stories sci-fi