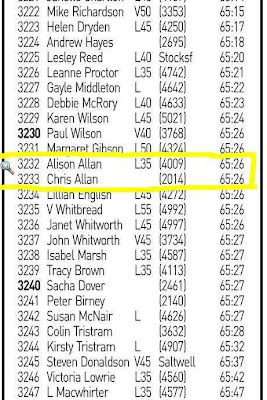 Way back in October 2008 I blogged about how my wife and I were running the Great North Run and I mentioned at the end of that feature post how next I’d like to try that other “great north” running event, The Blaydon Race…

Well, I’m saving this post on the actual day and have to admit I’m writing it a wee bit after taking part in the Blaydon Race ’09 because I was frankly too exhausted after the race to even lift a finger near my keyboard! (But you can still see my Tweet from that day!) And compete in this year’s historic run from Newcastle to Blaydon we did, and I’m happy to report it was worth every breathless mile too! 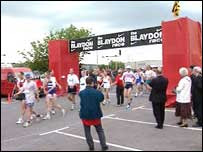 joined the masses in Newcastle city centre at a civilised 10am, the Blaydon Race is held in the evening, and it meant after a day of work for both of us, going home to get changed and then return to the Toon’s Big Market area to soak up the atmosphere in front of Balmbra’s pub where traditionally the race sets off from... 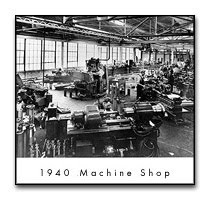 The route of the race takes you quickly out of the town centre and onto the famous and very, very long straight of Scotswood Road. But as with the GNR last year, the atmosphere of the early summer’s evening carries you along as local people line the roadsides and cheer you on your way. Before crossing the Tyne, you pass Lord Armstrong’s old factory, now called Vicker’s which actually holds great personal significance for me because my paternal grandfather spent the years of the Second World War (and after) working there as a horizontal borer in "Shop 21"... (But that's another story waiting to be retold and possibly re-imagined!)

But what link can I claim for the Blaydon Race with my writing, since my posts here are meant to be about creative scribbles in some way? Well, when my "Moon Crater"TM novel is finished I have further aspirations to write an historical adventure novel for kids of the same age range, set in and around Newcastle, and if you look into the history and beginnings of the Race to Blaydon, the original story of the Blaydon Races themselves is to a local history buff like myself (with a love of timelines), of infinitesimal inspiration… There’s the original Balmbras pub from the late 19th century, which today still stands, there’s the i 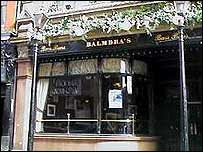 mportant lines of the song and the date, “the 9th of June”, and there’s the little known fact that the original “races” weren’t 'run' along today's path but it was actually the road route the bus took from Newcastle to Blaydon where the horse races known as the 'Blaydon Races' took place…

All in all, though, getting the opportunity to run in the Blaydon Race this year has been like fulfilling a mini-dream. It’s such an important part of the North East consciousness that we knew after completing the 13.1 mile GNR last year that this shorter (but by no means more “walk in the park”) run of 6.7 miles would be an important challenge for us as true “Geordies” – and especially for myself, who's never was a “natural born jogger”, and I know for months and years afterwards there’ll be a great sense of personal achievement to be able to hum to myself # “Al the lads’n’ lasses there, al with smilin' faces, gannin’ alang the Scotswood Road to see the Blaydon Races!” # 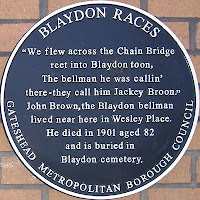