First Impressions Of Another World... 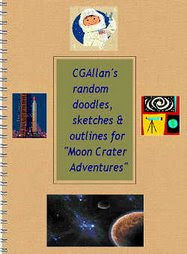 # “From your red balloon you were a super hi-tech jet fighter, floating over planet Earth, come back down here...”# - Guster

It's become a bit of a November tradition now to give an update on how my first online gamebook is coming along... So by means of an early but hopefully timely Crimbo present with this post, artist Rich Windass and myself will give you some early concept designs and ideas for how the "Moon Crater Adventures" are shaping up to progress into 2009 and beyond...


I had to admit that the whole bold endeavour of creating and writing a series of interlinking, page-jumping (and turning!) gamebooks or branching stories is all taking longer than I initially 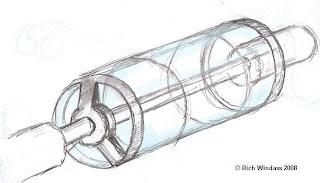 envisioned when I first touted the Adventures as "Coming Soon" back at the beginning of 2007... But this lengthy "in development" stage needn't necessarily be "hell" or a bad thing. I remember a teacher at school commenting on another ambitious plan to create a Sixth Form magazine, saying to us, "I'm a strong believer in the building of something great from humble beginnings..." (that whole saga is another story, best left for another time though) and, in fact, as you'll surely agree, from Rich's amazing preliminary sketches here, this slower evolution of the Adventures, as we thrash out story plans and design ideas, is making sure a potentially out-of-this-world saga is unfolding on paper at least... Like the back and forth motion of an old 80s Pong-style game the process of us working together has produced some amazing collaborative ideas as we knock our noggins together and hit crazy wide-eyed notions between ourselves, all the time advancing and developing these space stories, adding layers and detail to the plot...

So, what's the "new" news on the Adventures that hasn't been talked about before on this blog? Well, there's now only going to be a total of 3 Adventures instead of my original, probably over ambitious, 7 - but at least now I've got a complete plot for the whole story thread running through the 3 parts (and, besides, I've always loved the idea of trilogies anyway...) And apart from that, directly below you can read a breakdown of the characters you'll encounter on your journey into the first Adventure "Simulacrum" - so without further ion-engine delay, let me introduce you to the main cast of my Seal Your Own Fate series: 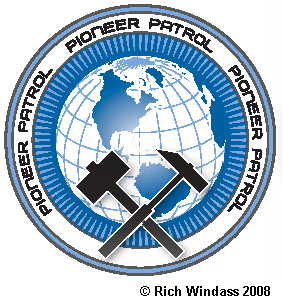 I think from a creative point of view (as well as being a way to help build "fan" anticipation), there's something to be said for spilling a little of the beans on a "new" and emerging series (which is even done by big-budget TV productions these days!) But the real point with regard my Adventures series of letting readers know as much as is in this post, is because these particular stories have always been intended to be as fully reader-interactive as they can be, in more ways than just choices at the bottom of the page - I'm going to actively encourage readers to write in and on to the Adventures webpages, leaving comments on posts to say where they'd like to see the story go next - fresh ideas will always be welcome... 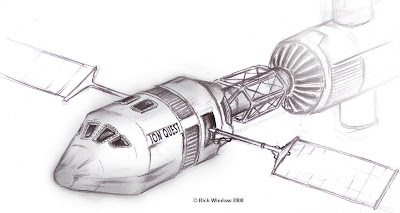 And never fear, despite letting some of the Simulacrum secrets out with this post, there's still plenty of questions remaining too, though - like... Who is "Janus"? What was "The Total Eclipse?" Why is the IQ heading away from Earth? Which page will YOU decide to turn to next? When will YOU find out where the journey is taking YOU...? And, of course - How do these Adventures relate to my main "Moon Crater" novel itself? 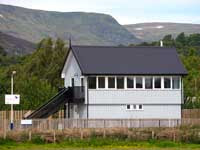 Recently I read on the Guardian Blog a piece about the search for new sci-fi ideas, and so armed with this creative inspiration to add fire to my belly, on an early winter week's break up in the Cairngorms, Scotland, I began to properly flesh out the story for "Simulacrum"... My wife and I stayed in a Signal Box of all places, but the surrounding countryside and views helped to provide fitting inspiration to help 'signal' the future of my space series - for instance, one important thing I've managed to sort out was a problem I had (even though the first initial pages have been posted up for a while now), finding a way to organise and approach the task of writing a split-paths story - weirdly, the one that's I've finally decided suited this sort of narrative best is a traditional "Chapter by Chapter" route... 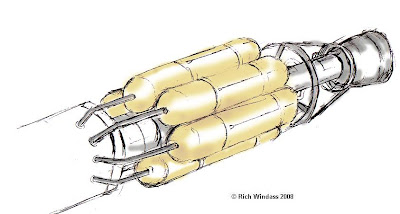 But what ELSE can you expect to see and read in the "Moon Crater Adventures? Well, there'll be blasts from Earth's past, monstrous marauders, desolate dark zones and a mythic Treasure waiting to be found... and of course, the fantastic art of Rich Windass will be accompanying the descriptions of all this, so with that, let the Adventures continue and let's begin to Seal Your Own Fate... 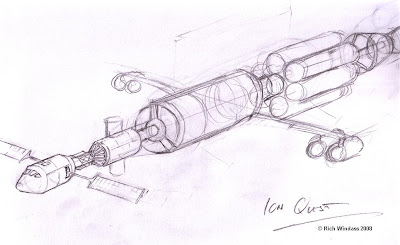 to make the light-year leap

and begin your journey


NB - all artwork contained on this specific blog post is ©Rich Windass 2008 - the right of Richard Windass to be identified as the artist of these works has been asserted by him in accordance with the Copyright, Designs and Patents Act 1988.
about writing New Stories sci-fi writing and the Web