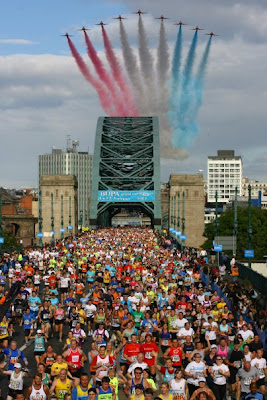 I'll be recovering for most of this month I suspect from one of the greatest things I've ever done in my life so far... a 13.1 mile half-marathon called the Great North Run here in the UK... It's been one of those events in the local calendar and popular imagination that I've grown up with in Newcastle when around the same time every year, close to the end of summer, literally thousands of people from all over the country (and the world) descend on our city and most main roads are closed off to make way for what's become known as the biggest half-marathon in the world...


It began back in the early 1980s as a modest venture and has grown with each advancing decade since then, and to be honest, apart from seeing glimpses of it on TV over the years, I haven't really paid that much attention to it personally until these past few years because don't really regard myself as a "sporty person". I do like playing badminton and going swimming, hiking and cycling on a casual basis but I've never been the athletic type in the more competitve sense of the word. I distinctly remember the dreaded "cross-country runs" at school which always came round in the spring and summer months during games lessons, where teachers would stand at strategic points round a course of hills and overgrown fields that surrouned our school to make sure no-one stopped running or walked around the course. Thankfully, in recent years, whenever I've done any kind of energetic exercise like that I've managed to get away from the "unfitness cough" I used to get as a kid after those awful cross-country forced stampedes of my younger years...

But my wife and I both had quite personal reasons for doing the Great North Run this year as we decided to use the challenge to raise money for the Alzheimer's Society. On the race day itself, you realise that basically everyone in the field is running in aid of some charity or organisation or in the memory of someone who's died from all the information emblazoned on T-shirts worn by each runner, and we were no different. For a couple of years now my wife's grandmother

was suffering from Alzheimer's and about 10 years ago my own side of the family had personal experience of the disease when a great-aunt of mine who had become like a grandmother to me was also diagnosed with it. Both Alison and myself found those times shared with our relatives after the diagnoses to be quite difficult ones, watching people we knew and loved gradually lose pretty much all sense of awareness and memory, becoming a total contrast to how they used to be so midway through last year we decided to enter the Great North Run in tribute to these two brilliant women in our families, (as well as ourselves my wife's cousin and boyfriend ran as well, and we hoped to raise a good amount for the Alzheimer's Society between the four of us).

Unfortunately Alison's grandma died during the summer this year, in the late stages of Alzheimer's, before the Run itself, and so taking part in the race and the day itself held a special resonance for all of us as we got ready to approach the start line, and perhaps gave us that little extra determination in the latter stages of the race to keep going to the finish line. 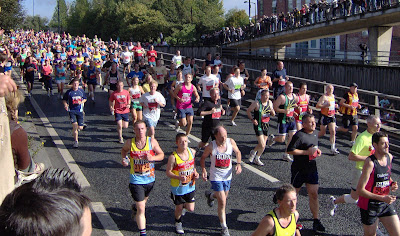 But our training had thankfully began back in Februrary this year, a good seven months before the event - I don't think you can really do something like this without any training at all, especially because we were still feeling absolutely exhausted by the end, even with our training. It was still cold, dark winter evenings when we did begin our trainigg, running about three miles on average a week along the Quayside in Newcastle, normally straight after work (we found it best to do this to stop ourselves getting in from work and slumping on the comfortable sofas and thinking, "We'll just go out tomorrow"!). We gradually upped our training as the spring months came on, to four miles, then six, until eventually, just before the big Run itself, we managed a nine mile run. I remember feeling distinctly proud of myself on the day of the Run when we passed Mile Marker 9 and thought, "Well, that's further than we've done before, so there's no question I'm going to stop now..."


The sheer magnetic atmosphere of the Great North Run though is something that also carries you along much further than you ever thought you could manage. Public figures and Celebrities like Tony Blair and Chris Hoy Wall started off the event, then the encouraging shouts of total strangers spectating at the sidelines all along the 13.1 mile course keep you going too. There's even a "Wall of Sound" as it's know at about Mile 12 with a long, long avenue of huge speakers belting out rousing tunes like "Eye of The Tiger" and when runners in huge, Paddington Bear or Tellytubbies costumes pass you, you feel that if they can do it in such sweltering suits, then, you in your mere T-shirt and shorts must be able to manage it!

I'm happy to be able to say that Alison and I completed the Great North Run together in a quite respectable time of 2 hours and 36 minutes, running all the way (on average a 12 minute mile), and although it was in memory of the passing of people we miss a lot, we're also happy to report that we (and many, many others) managed to raise a good sum for the Alzheimer's Societytoo. Thanks have to go to everyone who sponsored and supported us leading up to the race and on the Run day itself because we really couldn't have achieved any of it without that help.

Our legs were sore the day after the Run but it was definitely all for a worthy cause and I personally surprised myself as to what I could achieve if I put my mind to it, especially considering those disastrous cross-country runs all those years ago at school...


So, is that it? You may ask? Do we stop our new-found love of running there? Well, next year's Great North Run is a long way off, but perhaps the next stop (or should that be "start"?) could be the shorter, but by no means less locally iconic Blaydon Races...

Oh me lads, you should've seen us gannin'
Passing the folks along the road
And all of them were starin'
All the lads and lasses there
They all had smilin' faces
Gannin along the Scotswood Road
To see the Blaydon Races

The rain it poured down all the day
And made the ground quite muddy
Coffee Johnny had a white hat on
Shouted 'Wee stole the cuddy?'
There were spice stalls and monkey shows
And old wives selling ciders
And the chap on the ha'penny roundabout
Saying 'Any more lads for riders?'
history memories travel