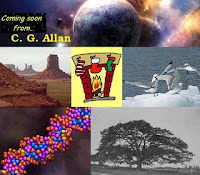 I’m in a “tidy-up” sort of mood right now… I find that in life I can be the most messy person known to humankind, letting things pile up around the house, but every so often there comes a realisation and real motivation of “enough is enough” and I suddenly bolt into action and whiz through things with renewed energy - my wife incidentally thinks that I work some “Bibbidi-bobbidi-boo” Disney-style magic whenever I say I’m going to tidy up our living room and she comes in after just five minutes and it’s all clean (hint: this is where secret cupboards like the one in the background of the Monica’s apartment in Friends come in handy!)

Anyway, with my writing too for the past few weeks I’ve been looking to round things off from

the old year before all the things I've planned that are chattering away in my brain are let out as the new year begins. So it’s an excuse for a sort of “in with the new and out with old” kind of journal post really, and as the cold winter wind lingers on, whispering for us to stay indoors more, I thought it really would be a good opportunity to finish off 2007 with the launch of some new stories…

Firstly, there’s the final two of my 2007 "Coming Soon" stories - both great reads (in my humble opinion!) for a winter’s night in by the fire... So without further ado, follow these links for the dusty tale of The Silhouettes & Winds of the Valley and (in contrast) over at my Younger Children's stories page will be debuting the second icy tale of my kittiwake saga, Kyle's Companion…

Perhaps it’s because of the whiz-bang nature of my tidying up mood at the moment but I’ve also written a new “flash fiction” story and in the next few days I'll be uploading that to my Micro Fiction page - Restore The Story is meant as an uplifting tale of Divine pondering and routine PC commands… (work that one out without reading it if you can!)

As I begin to look back over this past year, I also want to link here to two timely reminders of

other pieces of fiction I’m quite proud of from these past 12 months of my writing presence on the Net – so click here to read the story of Meticulous Nicholas - a poem I wrote last winter whilst surrounded by snow… And as a sort of "new year treat" for readers, you can still click here to go to my Indie Fiction page where the very first exclusive teaser for my novel-in-the-making Moon Crater appeared down the sidebar earlier in the year…

Another story which isn’t so much being finished off but more continued, is an Indiana Jones fan fiction story which I’ve been writing co-operatively with other fans for almost three whole years now… And this adventure is really only just getting started… I’ve recently added a few more parts to the story so click here to get caught up with this ongoing collaborative story of Dr Jones and the mysterious "Curse of the Chinese Whisperer"… (and if you fancy it, why not log in to the forums there and join us, adding your own mini chapter or paragraph to the adventure?)

The final piece of “admin” for the year to round things off is that following my ‘Challenge of Things to Come’ post here in November about the new “Moon Crater Adventures”, which I have sky-high hopes will really get zooming off the launch pad in 2008, there's going to be a 'Forward to the Adventures' introduction by both myself and co-pilot artist Rich Windass appearing on the newly renamed "Portal page" by the month’s close…

Well, that’s all for now, folks, as a very wise pig once said, but it’s only the end for 2007… The new year looks to be the best yet for my writing, and with my very next post here, I’ll be doing a review of the past year as well as importantly looking ahead and sharing some of my excitement for what dreams may come my way in 2008… As ever, stay tuned… (and stay warm if the snow finally arrives!)
Fan Fiction New Stories