Two new stories and a load of links... 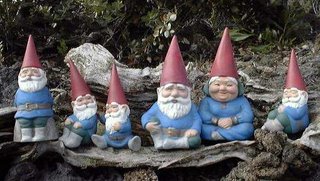 This week, it’s just a short post to let you know that the facelift of this blog continues with the promised Moon Crater handy catch-up links list being added. So now there’s no excuse not to know what the heck I’m on about when referring to my novel! Anyway, if you scroll right to the bottom of this page, below the general links to my other stories blogs and main writing site, you can now read all the posts in order in which I’ve specifically talked about the book itself. It should help anyone new chancing on this blog too to get up to date quickly, with a bit of luck, too. (Amendum - this links list has now disappeared and will reappear in a different form over at my official site at some point in the future...)


I’ve also updated my display picture below with a full-colour of Gned the gnome “signposting” the way to the land of Moon Crater… (just scroll down to the bottom of the page again and you won’t be able to miss him!)

I’ve also got to apologise, by the way, to those of you using Firefox, Opera or other Linux browsers to view my blog – I’m aware that the “Top Secret” blog template I’m using has trouble displaying in anything but Internet Explorer – but rest assured myself and Twig are on the case and won’t rest until we sort the coding properly to allow full accessibility to everyone. Basically, if you’re curious, and can’t see it properly, what you "should" be able to see is an “Eyes Only” memo page, a bit like in James Bond, which contains my blog posts (I just thought I’d better explain it in case anyone’s wondering why the heck I’ve just got a plain white look to my blog!)

Thankfully, as Twig and his penguineers construct my official writing site ( http://www.findthemissingreel.com/ ) they are designing it with “accessibility for all” in mind, so anyone using any kind of browsers should be able to view that site at least, as it was originally intended (Urk, why did I sound like an advert for Star Wars there?!) Anyway, any ideas or helpful tips on how to solve the non-Linux source coding for this blog, would be appreciated – you could just leave a comment on this post for me!

It’s not all boring business this week, though – I have posted up two new stories on my other blogs… One is a "new" science fiction story called The Thirst For Knowledge and it’s at:

The other is a reprint of an adventure story I’ve already had published elsewhere on the net called Indiana Jones & The Quest of the White Knight – I just wanted to have it catalogued properly on one of my own sites, so it’s at:

Both stories are written in first person, which is a writing voice I'm increasingly enjoying writing in. And by the start of next week, both will also have commentaries after them by me, explaining a little bit about why I wrote them - I always enjoy reading why other writers say why they wrote a particular story, so hopefully you will too!

Well, I said it was going to be a short post today, but once again I’ve blogged on and on and on, so before I add another “on” to this sentence, I’ll sign off – hope you enjoy the new stories if you have time to read them…
New Stories writing and the Web